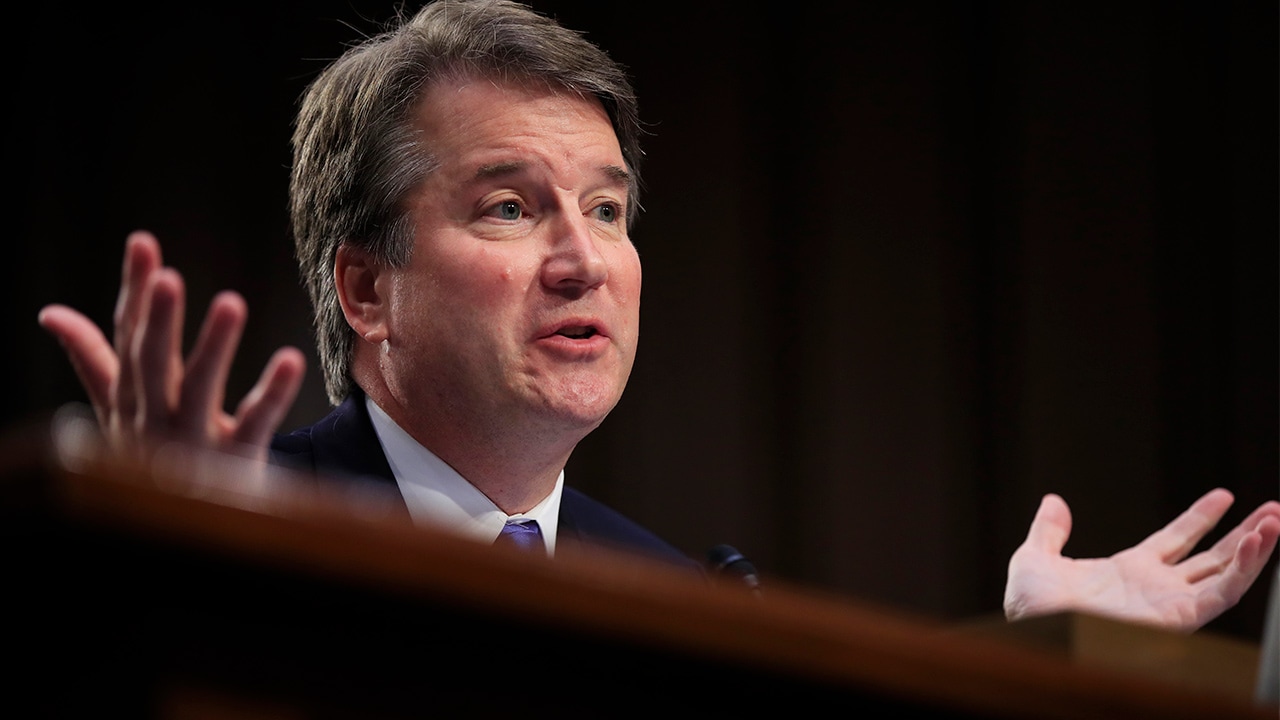 
“I am with him all the way.” — President Donald Trump
The president spoke a day after a second allegation emerged against Kavanaugh, a development that further imperiled his nomination to the Supreme Court, forced the White House and Senate Republicans onto the defensive and fueled calls from Democrats to postpone further action on his confirmation.
Trump, at the United Nations for his second General Assembly meeting, called the allegations unfair and unsubstantiated, made by accusers who come “out of the woodwork.” He also questioned the political motivations of the attorneys representing the women, saying “you should look into the lawyers doing the representation.”
On Kavanaugh, Trump stressed: “I am with him all the way.”
The new accusation landed late Sunday in a report from The New Yorker, just a few hours after negotiators had reached an agreement to hold an extraordinary public hearing Thursday for Kavanaugh and Christine Blasey Ford, who accuses him of sexually assaulting her at a party when they were teenagers. Kavanaugh denies the accusation.
Presidential counselor Kellyanne Conway told CBS on Monday that the accusations against Kavanaugh sound like “a vast left-wing conspiracy,” using rhetoric that echoed Hillary Clinton’s 1998 description of allegations that her husband, President Bill Clinton, had had affairs.

Conspiring to Undermine His Pick?

Trump is suggesting the timing of the New Yorker article is further evidence of what he has been saying privately for days: that the Democrats and media are conspiring to undermine his pick.
The second claim against Kavanaugh dates to the 1983-84 academic year, which was his first at Yale University. Deborah Ramirez described the incident after being contacted by The New Yorker magazine. She recalled that Kavanaugh exposed himself at a drunken dormitory party, thrust his penis in her face, and caused her to touch it without her consent as she pushed him away.
In a statement provided by the White House, Kavanaugh said the event “did not happen” and that the allegation was “a smear, plain and simple.”
However, Sen. Dianne Feinstein of California, the ranking Democrat on the Judiciary Committee, called for the “immediate postponement” of any further action on Kavanaugh’s nomination.
Republicans on the Senate Judiciary Committee said they would investigate Ramirez’s accusation. Taylor Foy, a Judiciary spokesman, complained that Democrats “actively withheld information” from the Republicans. He said they appear “more interested in a political takedown” than a bipartisan process.
The New Yorker said it contacted Ramirez after learning of a possible incident with Kavanaugh. It said that the allegation came to the attention of Democratic senators through a civil rights lawyer. The Democrats then began investigating.
Ramirez was reluctant at first to speak publicly “partly because her memories contained gaps because she had been drinking at the time of the alleged incident,” The New Yorker reported. After “six days of carefully assessing her memories and consulting with her attorney, Ramirez said that she felt confident enough of her recollections” to speak publicly, the report said.

Trying to Reach Ramirez at Her Home

The Associated Press tried reaching Ramirez at her home in Boulder, Colorado. She posted a sign on her front door, indicating she would have no comment.


A handful of senators in both parties remain undecided on Kavanaugh’s nomination.
Joining the maelstrom, Michael Avenatti, the attorney representing porn actress Stormy Daniels in her legal fight with Trump, claimed to represent a woman with information about high school-era parties attended by Kavanaugh and urged the Senate to investigate. Avenatti told the AP that he will disclose his client’s identity in the coming days and that she is prepared to testify before the committee, as well as provide names of corroborating witnesses.
A White House official not authorized to speak publicly questioned the accusations coming from Avenatti’s client, saying that the presence of the high-profile attorney — who has publicly taken on Trump and is weighing a 2020 Democratic presidential bid — makes the proceedings a “circus.”
The accusation from Ramirez raises the stakes further for a dramatic showdown Thursday, as Kavanaugh and Ford testify in public about an incident she characterizes as attempted rape — and that he says simply never happened.
Kavanaugh’s nomination hangs precariously. A handful of senators in both parties remain undecided on his nomination. Defections among Republicans would likely block his path to the Supreme Court.
The White House is approaching Ford’s potential testimony with trepidation, nervous that an emotional appearance might not just damage Kavanaugh’s chances but could further energize female voters to turn out against Republicans in November.
Still, the White House and Republicans have cast doubt on Ford’s allegations. The Judiciary panel said it had talked to three other people whom Ford has told The Washington Post were at the party where the alleged assault took place — Mark Judge, Patrick J. Smyth and Leland Ingham Keyser. All three told investigators that they had no recollection of the evening in question, the committee said. 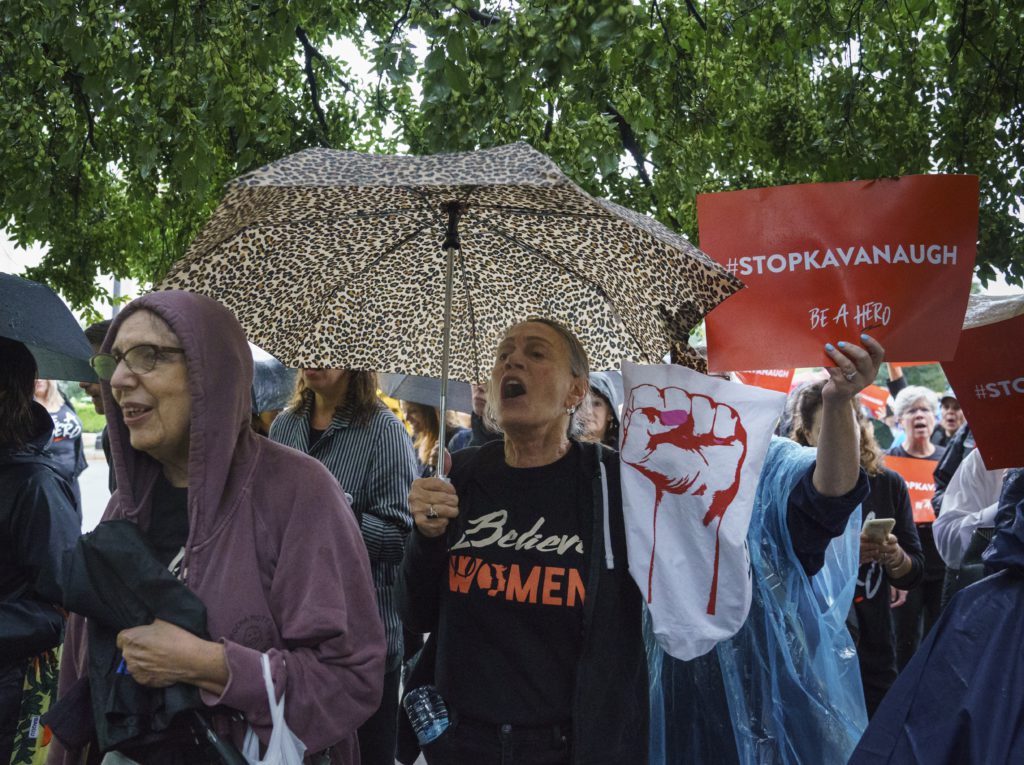 Protesters march from the Supreme Court to Hart Senate Office Building on Capitol Hill in Washington, Monday, Sept. 24, 2018. A second allegation of sexual misconduct has emerged against Judge Brett Kavanaugh, a development that has further imperiled his nomination to the Supreme Court, forced the White House and Senate Republicans onto the defensive and fueled calls from Democrats to postpone further action on his confirmation. President Donald Trump is so far standing by his nominee. (AP Photo/Carolyn Kaster)

The Post reported Sunday that Keyser said in a brief interview at her home that she still believes Ford, even if she doesn’t remember the party.
Kavanaugh plans to turn over to the committee personal calendars from the summer of 1982. Those calendars, he says, don’t show a party consistent with Ford’s description of the gathering in which she says he attacked her, The New York Times reported Sunday. The calendars list basketball games, movie outings, football workouts, college interviews and a few parties with names of friends other than those identified by Ford, according to the Times.
A person working on Kavanaugh’s confirmation backed up the Times account of the calendars to the AP. The person spoke on the condition of anonymity to discuss the matter.
Even before the latest turns, the carefully negotiated hearing at the Senate Judiciary Committee with Kavanaugh and Ford carried echoes of the Anita Hill hearings in 1991. Then, like now, another Republican president had selected a Supreme Court nominee, now-Justice Clarence Thomas, facing accusations of sexual harassment.
Senate Judiciary Committee Chairman Chuck Grassley, R-Iowa, wrangled with Ford’s lawyers for the past week over the exact terms of her appearance. A breakthrough came over the weekend as Ford agreed to testify.
Ford’s lawyers said it was still unclear as of Sunday who will ask questions, as Republicans were trying to hire an outside female counsel for the role. The 11 senators on the GOP side of the dais are all men, creating risky optics for a hearing that will be carried on live television.
Democratic senators are expected to ask their own questions. They have protested the panel’s treatment of Ford, comparing it to bullying.