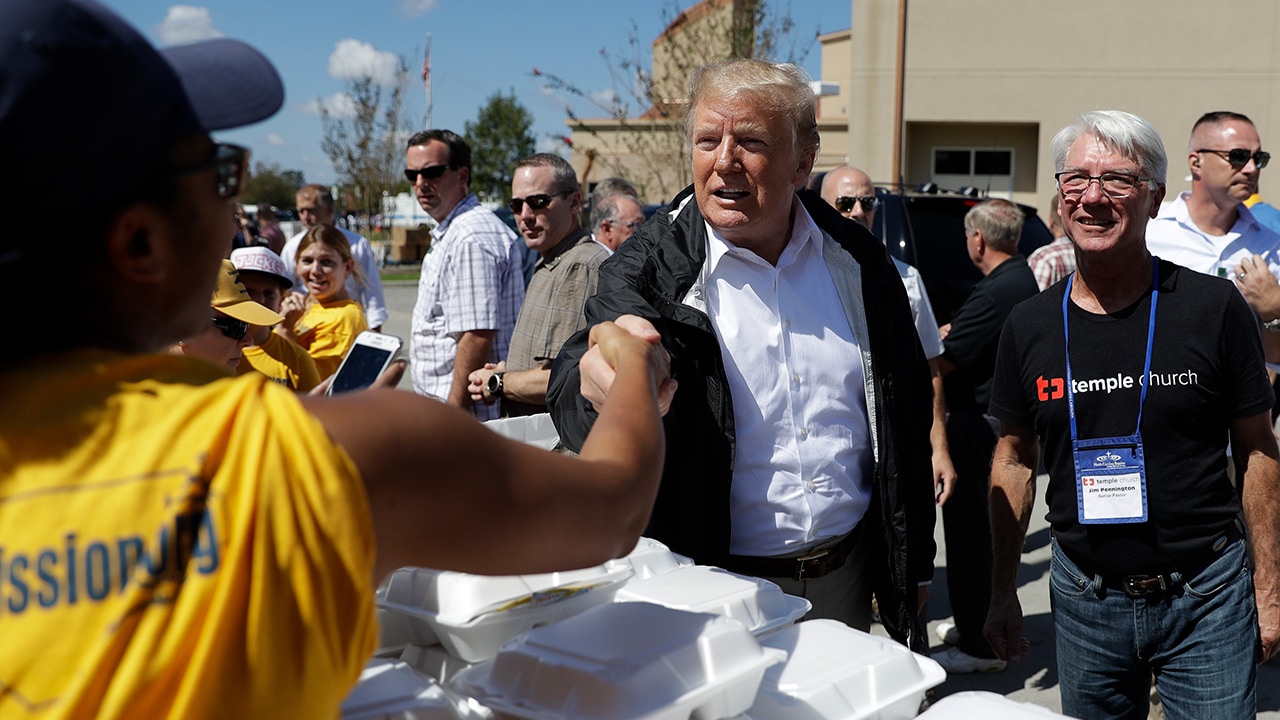 WILMINGTON, N.C. — The death toll from Hurricane Florence climbed to at least 37, including two women who drowned when a sheriff’s van taking them to a mental health facility was swept away by floodwaters, and North Carolina’s governor pleaded with thousands of evacuees not to return home just yet.
President Donald Trump, meanwhile, arrived in storm-ravaged North Carolina on Wednesday and helped volunteers at a church in the hard-hit coastal town of New Bern.
“How’s the house?” Trump was heard asking one person as distributed plastic foam containers of food, including hot dogs, chips and fruit. “You take care of yourself.”
Wilmington, population 120,000, was still mostly an island surrounded by floodwaters, and people waited for hours Tuesday for handouts of food, water and tarps. Thousands of others around the state waited in shelters for the all-clear.
“I know it was hard to leave home, and it is even harder to wait and wonder whether you even have a home to go back to,” Gov. Roy Cooper said.

After submerging North Carolina with nearly 3 feet of rain, the storm dumped more than 6.5 inches of rain in the Northeast, where it caused flash flooding.

In South Carolina, two women died on Tuesday evening when floodwaters from the Little Pee Dee River engulfed the van taking them to a mental health facility, authorities said.
The risk of environmental damage mounted, as human and animal waste was washed into the swirling floodwaters.
More than 5 million gallons of partially treated sewage spilled into the Cape Fear River after power went out at a treatment plant, officials said, and the earthen dam of a pond holding hog waste was breached, spilling its contents. The flooding killed an estimated 3.4 million chickens and 5,500 hogs on farms.
In Wilmington on Tuesday, workers began handing out supplies using a system resembling a giant fast-food drive-thru: Drivers pulled up to a line of pallets, placed an order and left without having to get out. A woman blew a whistle each time drivers had to pull forward.
Todd Tremain needed tarps to cover up spots where Florence’s winds ripped shingles off his roof. Others got a case of bottled water or military MREs, or field rations. An olive-drab military forklift moved around huge pallets loaded with supplies.

Brandon Echavarrieta struggled to stay composed as he described life post-Florence: no power for days, rotted meat in the freezer, no water or food and just one bath in a week.