WILMINGTON, N.C. — Communities along the Carolina coast buttoned up against the onslaught of Hurricane Florence as forecasters Wednesday warned that the monstrous storm could hesitate just offshore for days — punishing a longer stretch of coastline harder than previously feared — before pushing inland over the weekend.

“Don’t play games with it. It’s a big one.” — President Donald Trump

In a videotaped message from the White House, President Donald Trump said the government is fully prepared for Florence but urged people to “get out of its way.”

The National Hurricane Center’s projected track had Florence hovering off the southern North Carolina coast from Thursday night until landfall Saturday morning or so, about a day later than previously expected. The track also shifted somewhat south and west, throwing Georgia into peril as Florence moves inland.

The overall trend is “exceptionally bad news,” said University of Miami hurricane researcher Brian McNoldy, since it “smears a landfall out over hundreds of miles of coastline, most notably the storm surge.”

As of 11 a.m., Florence, a potentially catastrophic Category 4 storm, was centered 485 miles southeast of Wilmington, North Carolina, moving at 15 mph. It was packing winds of 130 mph and enough moisture to dump feet of rain on the region.

83-Foot Waves Near the Eye of Florence

A hurricane-hunter airplane measured 83-foot waves near the eye of Florence, according to a tweet from the National Hurricane Center.

“This is not going to be a glancing blow. This is going to be a Mike Tyson punch to the Carolina coast.” — Jeff Byard, an administrator with the Federal Emergency Management Agency

“This is not going to be a glancing blow,” warned Jeff Byard, an administrator with the Federal Emergency Management Agency. “This is going to be a Mike Tyson punch to the Carolina coast.”

As of Tuesday, about 1.7 million people in North and South Carolina and Virginia were under warnings to evacuate the coast, and hurricane watches and warnings extended across an area with about 5.4 million residents. Cars and trucks full of people and belongings streamed inland.

If some of the computer projections hold, “it’s going to come roaring up to the coast Thursday night and say, ‘I’m not sure I really want to do this, and I’ll just take a tour of the coast and decide where I want to go inland,'” said Jeff Masters, meteorology director of the private Weather Underground forecasting service.

With South Carolina’s beach towns more in the bull’s-eye because of the shifting forecast, Ohio vacationers Chris and Nicole Roland put off their departure from North Myrtle Beach to get the maximum amount of time on the sand. Most other beachgoers were long done.

“It’s been really nice,” Nicole Roland said. “Also, a little creepy. You feel like you should have already left.”

For many of those under evacuation orders, getting out of harm’s way has proved difficult, as airlines canceled flights and motorists had a hard time finding gas. 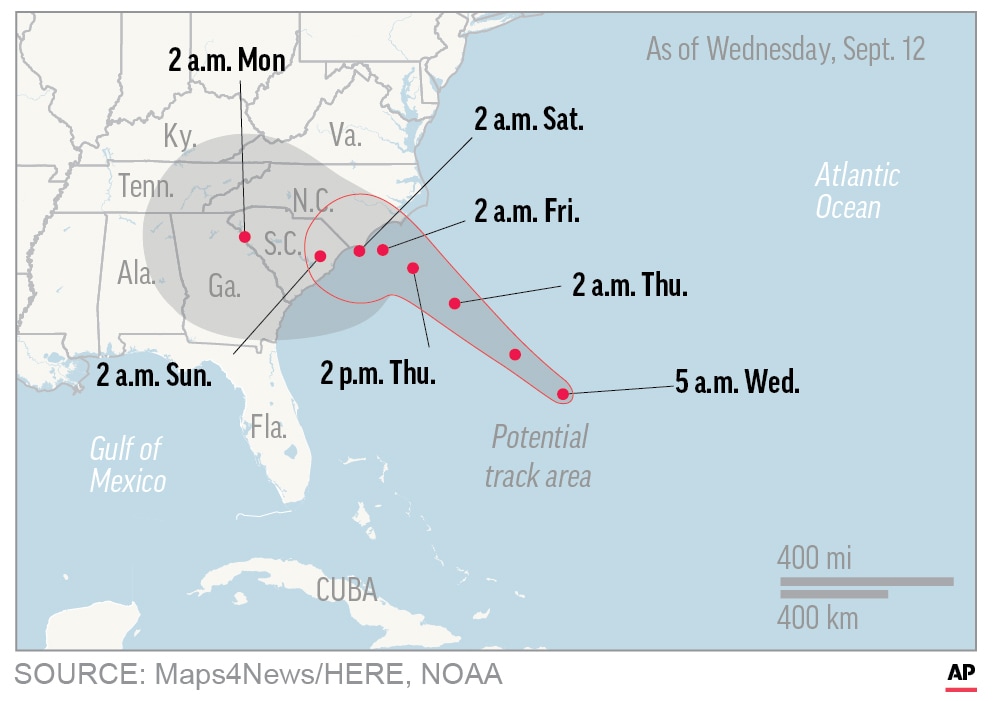 Most Dangerous of Three Tropical Systems

Michelle Stober loaded up valuables at her home on Wrightsville Beach to drive back to her primary residence in Cary, North Carolina.

“This morning I drove around for an hour looking for gas in Cary. Everyone was sold out,” she said.

“The biggest thing is you’re always worried about yourself and friends and family — and whether they’ll have a place to come back to.” — Michael Wilson, Wilmington, North Carolina resident

Florence is the most dangerous of three tropical systems in the Atlantic. Tropical Storm Isaac was expected to pass south of Puerto Rico, Haiti, the Dominican Republic and Cuba, while Hurricane Helene was moving northward away from land. Forecasters also were tracking two other disturbances.

The coastal surge from Florence could leave the eastern tip of North Carolina under more than 9 feet of water in spots, projections showed. The Navy, Air Force and Army were moving ships and aircraft out of harm’s way. Thousands of Marines and their families evacuated from Camp Lejeune, leaving the rest to dig in ahead of what could be a direct hit.

In Wilmington, resident Michael Wilson fortified his home against the wind and rain, and worried.

“The biggest thing is you’re always worried about yourself and friends and family — and whether they’ll have a place to come back to,” he said.