Bryson DeChambeau, the Clovis golfer known for his unusual approach to the game, is human after all.

Keegan Bradley held off Justin Rose in a sudden-death playoff to win the tournament for his first PGA Tour victory in six years.

Tony Finau was named to the Ryder Cup team after the BMW Championship wrapped up Monday. He is the final pick by U.S. captain Jim Furyk.

Rose Rises to No. 1 in World Rankings

Though Rose was runner-up at the FedEx Cup playoff event at the Aronimink Golf Club, he didn’t come up short in the world ranking.

Rose hit No. 1 in the world and became the 22nd player to reach the top spot since the ranking began in 1986.

DeChambeau, who finished the event at 13-under-par, however, is No. 1 in the Fed Ex standings heading into the Tour Championship.

Victories in the first two legs of the title chase had assured DeChambeau of the top spot regardless of how he fared in the BMW event. The remainder of the Fed Ex top five: Rose, Finau, Dustin Johnson, and Justin Thomas.

Bradley, who shot a final round 6-under 64 to finish at 20-under par, thrust his arms toward the gray sky and drizzle in celebration and waved his family onto the 18th hole. He tossed into the air his young son, Logan, who hadn’t even been born in 2012, the last time Bradley won on the tour.

“A lot has happened to me over these six years,” Bradley said. “I kind of fell of the radar there for a little while. It’s tough to go from being on Ryder Cup teams, being on Presidents Cup teams to being outside the top 100 in the world.” 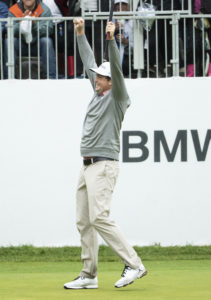 Bradley finished with his fourth career victory and first since the 2012 WGC-Bridgestone Invitational. He gets a trip to Maui to start next year for the winners-only Sentry Tournament of Champions.

Rose could have won in regulation but lipped out on the last hole to force the playoff.

Jordan Spieth, who has won three majors, finished 31st in the Fed Ex standings and missed the cut to play in the Tour Championship.

He hadn’t finished worse than 15th in the final standings in each of the previous five years. Spieth won the FedEx Cup in 2015.

“I was in control of my own destiny and didn’t have it this week,” said Spieth, who shot 73 Monday to tie for 54th.

This is a link to the Fed Ex standings.

You can see the results of the BMW Championships here.

The eight Americans who qualified on their own were Brooks Koepka, Johnson, Spieth, Thomas, Rickie Fowler, Bubba Watson, Webb Simpson, and Patrick Reed. Throw in Woods and Mickelson, and that gives the U.S. team a lineup that has combined for 31 majors.

That doesn’t mean as much in foursomes and fourballs, on a European course before the singing and chanting of Europeans fans.