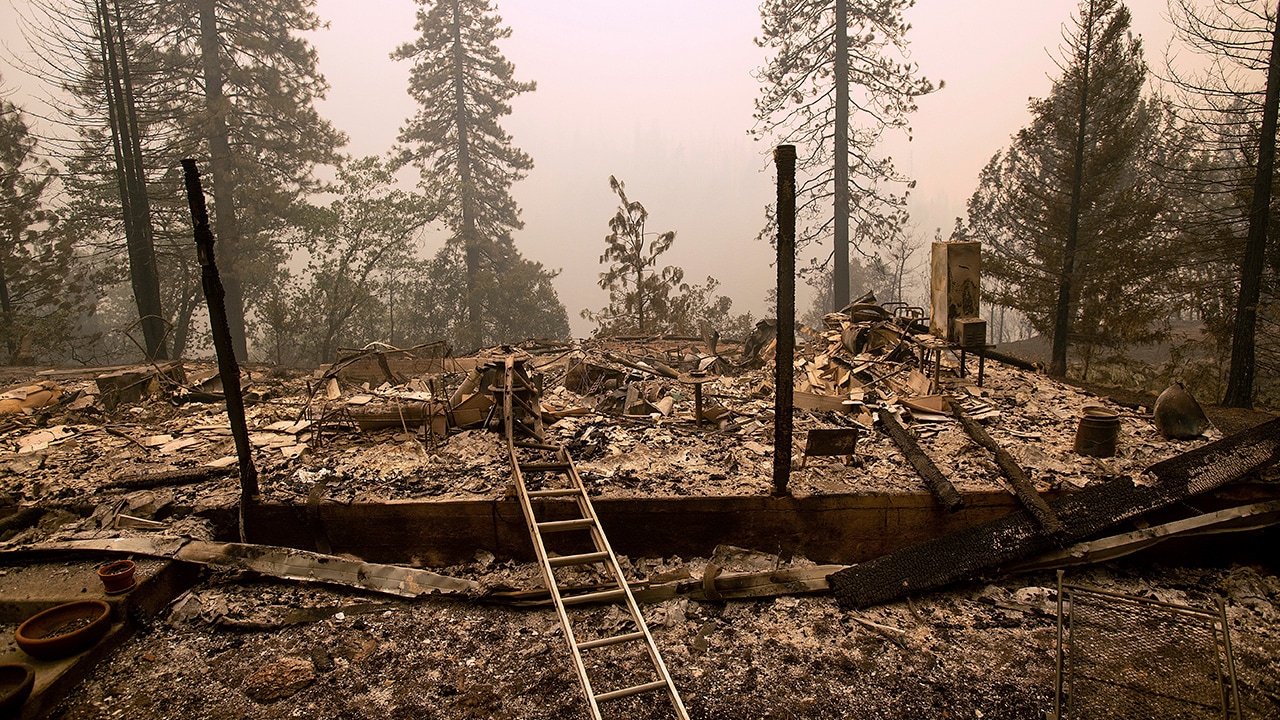 SHASTA-TRINITY NATIONAL FOREST — California is taking a financial wallop from unrelenting wildfires that have drained its firefighting budget and prompted nearly $1 billion in property claims even before the start of the dangerous fall fire season, officials said Thursday.
The disclosures came as a roaring blaze in a rural area near the Oregon state line closed 45 miles of heavily traveled Interstate 5, the main highway from Mexico to Canada.
Fierce orange flames forced panicked truckers to abandon big-rigs and brought screams from motorists as they watched the advancing fire in Shasta-Trinity National Forest.
A decision was expected Friday on when to reopen the highway.
The wildfire flared just weeks after a blaze in the Redding area killed eight people and burned about 1,100 homes.
California’s insurance commissioner said Thursday that victims of that fire and one in the Mendocino area — the two largest blazes in the state so far this year — have filed more than 10,000 claims so far totaling $845 million.

The two wildfires destroyed or damaged a combined 8,800 homes and 329 businesses.


“The worst may be yet to come.” — Commissioner David Jones
“The worst may be yet to come,” Commissioner David Jones warned at a San Francisco news conference, noting that California wildfires are typically more destructive after Sept. 1.
Last year, for example, wildfires that killed more than 40 people and destroyed thousands of buildings in counties north of San Francisco didn’t spark until October.
Also on Thursday, the director of the state’s firefighting agency said in a letter to lawmakers that the agency only had about $11 million remaining in its annual budget and anticipates needing another $234 million to add firefighters and helicopters, and to cover other costs of fires expected later this year.
The department had spent $432 million through the end of August, said Ken Pimlott of the California Department of Forestry and Fire Protection.
The Legislature budgets for firefighting costs based on historical averages. Cal Fire has requested extra money in seven of the past 10 years but never this early, according to the Department of Finance.

No Plans to Re-Open Interstate 5

In far Northern California, officials said they had no plans to re-open Interstate 5 on Thursday and would reevaluate early Friday — a decision that slowed or stalled truckers who rely heavily on the highway to transport goods along the West Coast.

The fire began Wednesday and nearly tripled in size overnight, officials said. By Thursday night it had grown to 34 square miles and had damaged three buildings, although there was no confirmation of any homes being destroyed. It prompted mandatory evacuations and was moving rapidly but remained far from any large towns.
David Steinberg and his partner Kim Mears were returning from a day hike when they came upon the wildfire and watched in awe.
Steinberg says they were mesmerized by the fire, but eventually realized the danger it presented.
“There’s a moment when you’re saying, ‘This is really exciting.’ Then you realize, ‘Oh this could be really dangerous,'” he said.
Elsewhere in the state, a fire burning in the Sierra Nevada had grown to more than 7 square miles after shutting down stretches of U.S. 395, State Route 108 and the Pacific Crest Trail along the eastern spine of California.
The Marine Corps Mountain Warfare Training Center, campgrounds and other areas were evacuated Wednesday. Ranchers were told to prepare to move livestock out of the area in Humboldt-Toiyabe National Forest.

High-Speed Rail CEO: People Will Ask How They Lived Without It