Big Oil Asks Government to Protect It From Climate Change 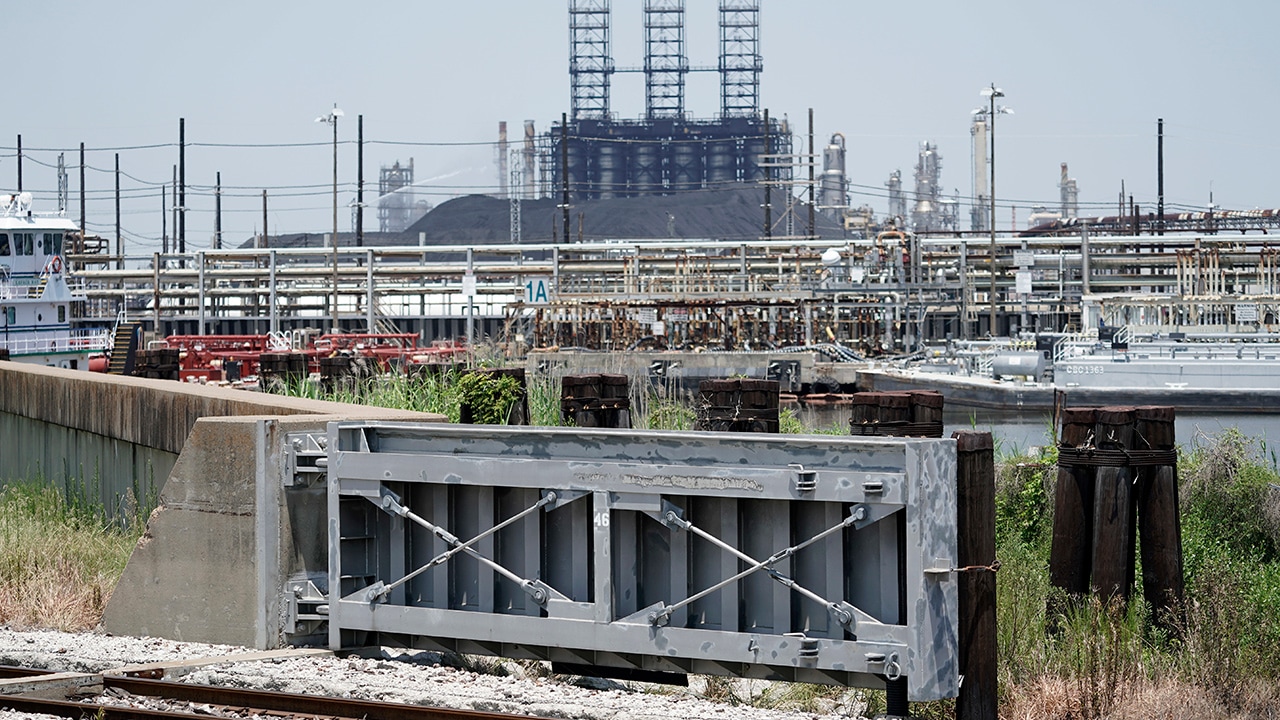 PORT ARTHUR, Texas — As the nation plans new defenses against the more powerful storms and higher tides expected from climate change, one project stands out: an ambitious proposal to build a nearly 60-mile “spine” of concrete seawalls, earthen barriers, floating gates and steel levees on the Texas Gulf Coast.
Like other oceanfront projects, this one would protect homes, delicate ecosystems and vital infrastructure, but it also has another priority — to shield some of the crown jewels of the petroleum industry, which is blamed for contributing to global warming and now wants the federal government to build safeguards against the consequences of it.
The plan is focused on a stretch of coastline that runs from the Louisiana border to industrial enclaves south of Houston that are home to one of the world’s largest concentrations of petrochemical facilities, including most of Texas’ 30 refineries, which represent 30 percent of the nation’s refining capacity.

Texas is seeking at least $12 billion for the full coastal spine, with nearly all of it coming from public funds. Last month, the government fast-tracked an initial $3.9 billion for three separate, smaller storm barrier projects that would specifically protect oil facilities.

Construction Could Begin in Several Months

Construction in Texas could begin in several months on the three sections of storm barrier. While plans are still being finalized, some dirt levees will be raised to about 17 feet high, and 6 miles of 19-foot-tall floodwalls would be built or strengthened around Port Arthur, a Texas-Louisiana border locale of pungent chemical smells and towering knots of steel pipes.
The town of 55,000 includes the Saudi-controlled Motiva oil refinery, the nation’s largest, as well as refineries owned by oil giants Valero Energy Corp. and Total S.A. There are also almost a dozen petrochemical facilities. 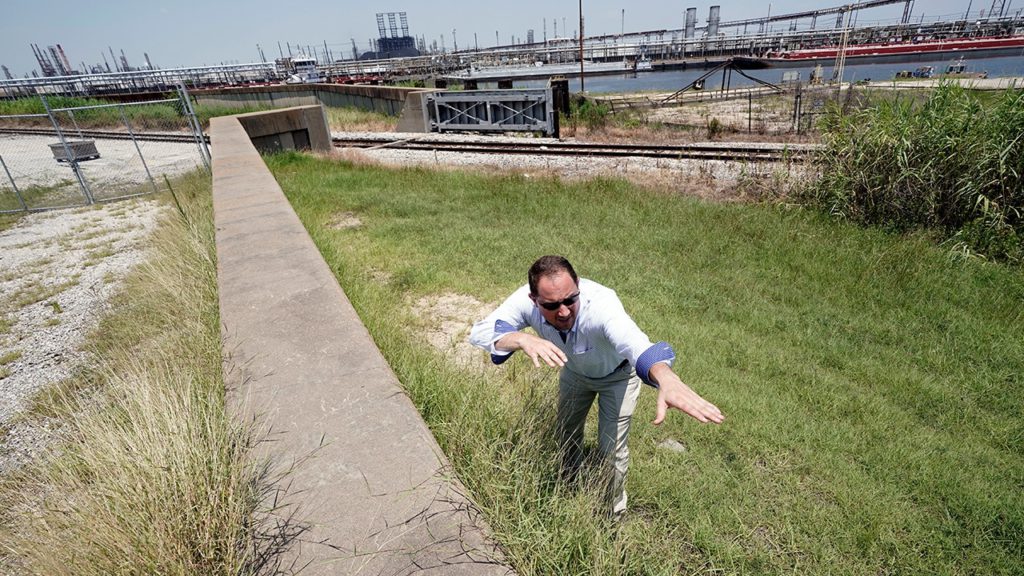 Resident Engineer Steve Sherrill, with the US Army Corps of Engineers, shows how much height will be added to some of the levees and seawalls near a refinery in Port Arthur, Texas. (AP Photo/David J. Phillip)

“Our regulations tell us what benefits we need to include, and they have to be national economic benefits,” Willey said.
Once work is complete on the three sections, they could eventually be integrated into a larger coastal spine system. In some places along Texas’ 370-mile Gulf Coast, 18 feet is lost annually to erosion, threatening to suck more wetlands, roads and buildings into rising seas.
Protecting a wide expanse will be expensive. After Harvey, a special Texas commission prepared a report seeking $61 billion from Congress to “future proof” the state against such natural disasters, without mentioning climate change, which scientists say will cause heavier rains and stronger storms.
Texas has not tapped its own rainy day fund of around $11 billion. According to federal rules, 35 percent of funds spent by the Army Corps of Engineers must be matched by local jurisdictions, and the GOP-controlled state Legislature could help cover such costs. But such spending may be tough for many conservatives to swallow.
Texas “should be funding things like this itself,” said Chris Edwards, an economist at the libertarian Cato Institute. “Texans are proud of their conservatism, but, unfortunately, when decisions get made in Washington, that frugality goes out the door.”

A Matter of National Security

State officials counter that protecting the oil facilities is a matter of national security.
“The effects of the next devastating storm could be felt nationwide,” Rep. Randy Weber, a fiercely conservative Republican from suburban Houston who has nonetheless authored legislation backing the coastal spine.
Major oil companies did not return messages seeking comment on funding for the projects. But Suzanne Lemieux, midstream group manager for the American Petroleum Institute, said the industry already pays into programs such as the federal Harbor Maintenance Trust Fund and the Waterways Trust Fund, only to see Congress divert that money elsewhere.
“Do we want to pay again, when we’ve already paid a tax without it getting used? I’d say the answer is no,” she said.
Phillips 66 and other energy firms spent money last year lobbying Congress on storm-related funding post-Harvey, campaign finance records show, and Houston’s Lyondell Chemical Co. PAC lobbied for building a coastal spine.
“The coastal spine benefits more than just our industry,” Bob Patel, CEO of LyondellBasell, one of the world’s largest plastics, chemicals and refining companies, said in March. “It really needs to be a regional effort.”

Black Bear Wandered Into Hotel That Inspired 'The Shining'