The reopening of iconic Yosemite Valley, a favorite destination of tourists worldwide, is finally here for Douglas Shaw.

A 20-day closure during peak tourist season at one of the busiest parks in the U.S. cost Shaw $200,000 in lost revenue at his hotel just outside Yosemite National Park. Most of the park reopened today.

The nearly three-week closure was the result of a wildfire that has burned 150 square miles and killed two firefighters since it started July 13. Though the blaze didn’t reach the heart of Yosemite Valley, it burned in remote areas of the park and choked popular areas with smoke.

During that time, Shaw wiped out his savings account, had to lay off eight of his 43 employees, and is considering early retirement to avoid a possible future with similar devastating wildfires.

“If I hadn’t had savings, which is depleted, I’d be scrambling for money or I wouldn’t have a business,” Shaw said Monday. “It’s a huge setback.”

Shaw is among hundreds of business owners in small communities surrounding Yosemite who depend on tourist dollars. Tens of thousands of visitors from across the globe canceled trips because of the park’s closure, which began July 25.

The Ferguson Fire is one of several devastating blazes in California that have killed at least a dozen people — the latest being a firefighter from Utah who died Monday while battling the largest fire in recorded state history north of San Francisco.

The Ferguson blaze was 86 percent contained as of Tuesday morning, fire officials said. It has scorched 96,606 acres.

In Yosemite, the wildfire peaked during the busiest month for tourism. The park draws more than 600,000 visitors during a typical August, according to the National Park Service.

“From an economic standpoint, it’s majorly significant to the region,” said Montalto, who visited one of the most popular attractions at the park, the Mariposa Grove of Giant Sequoias, when it reopened Monday ahead of the larger opening Tuesday.

“It’s like a big breath of fresh air to be able to get in there and explore these places again,” he said.

Weeks Before Bookings Return to Normal

While hotel owners and other business are relieved about the opening, they say it will likely be weeks before their bookings return to normal.

Shaw said his hotel probably won’t be more than 45 percent booked this week, when normally it’s sold out well in advance. There were just 10 people staying there Monday night, he said.

“Once the closure hit that three-week mark, there’s a full panic across the board for visitors, whether they’re from Beijing or Paris or San Francisco,” he said.

Tom Lambert, who rents out an apartment within the park, said he and his wife have lost about $20,000 in income because of the closure. And because the apartment is along the one entrance to Yosemite Valley that will remain closed for at least a week, he said his next booking isn’t until Aug. 31.

“And now people are starting to cancel into September, and we have October people asking about canceling,” Lambert said. “It’s still rough. The summer is pretty much lost.”

Officials are trying to get the word out that the park is back open. They have posted pictures of themselves and visitors at attractions holding red paddleboards that say #YosemiteNOW, and they’re encouraging visitors to do the same.

As for the park, a drop in visitor fees will impact park improvements, such as fixing roads and updating facilities, ranger Scott Gediman said.

Because those projects are planned years in advance, all improvements for this year will be covered but projects in the future will be affected, Gediman said, though it was too soon to know which ones.

It’s not the only national park struggling with wildfires.

A Montana blaze destroyed structures and forced evacuations Monday from the busiest area of Glacier National Park. Park officials said did not provide details on the structures lost on the north end of Lake McDonald. 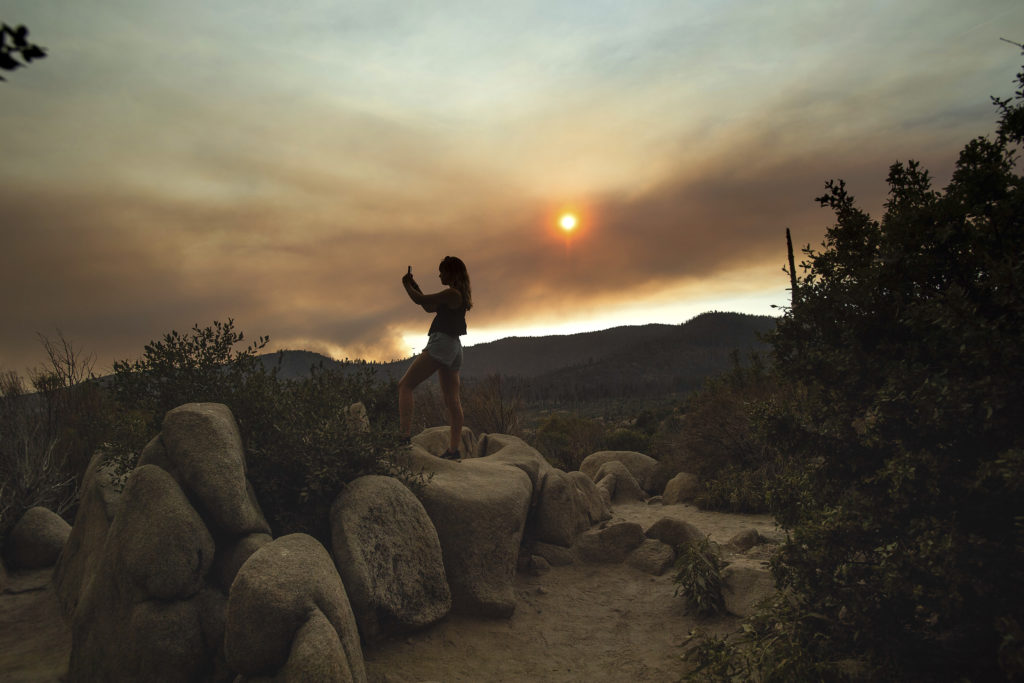 In this Tuesday, July 24, 2018, photo, Mara Schumann photographs a plume of smoke from the Ferguson Fire in Yosemite National Park, Calif. Yosemite Valley reopened Tuesday, Aug. 14, 2018, 14 days after a wildfire choked the park with smoke at the peak of tourist season. (AP File Photo/Noah Berger)

In Yosemite, visitors likely will notice some smoke and may even see flames on their way in, though the fire is almost entirely contained, Gediman said.

“People won’t have the crystal clear blue skies they’re used to,” he said, but added that the smoke “is the best I’ve seen it in several weeks.”

A major road from the south, Highway 41, and a popular park attraction known as Glacier Point will remain closed for likely at least another week for fire operations, Gediman said.

But as Gediman walked around the park Monday, he said there was a newfound sense of anticipation among workers who were tidying up campsites and preparing entrance stations.

“We are very excited to get the park reopened,” he said. “It seems like a long time and it’s certainly been very quiet.”

When Shaw heard the good news, he said he felt pure joy.

“It’s a beautiful thing,” he said. “You realize that roads are actually paved with money.”