Bank of America Delivers $1.85 Million in Grants to Fresno and Visalia Nonprofits
Share with friends

The few remaining campers in Yosemite Valley packed up their gear Wednesday and cleared the area for firefighters battling a huge wildfire near Yosemite National Park.


“So, this is a new memory. I’ve never been evacuated before.” — Yosemite visitor Miguel Martinez
The sun rose in a smoke-filled sky over the scenic valley, which normally bustles with summer tourists but has largely emptied out after authorities reluctantly ordered the closure a day earlier.
Officials were quick to point out that Yosemite wasn’t under imminent danger from the fire. Authorities decided on the closure to allow crews to perform protective measures such as burning brush along roadways without having to deal with traffic in the park that welcomes 4 million visitors annually.
One couple checked out of the Majestic Yosemite Hotel, while a large extended family from Los Angeles on an annual trip to the national park prepared to leave the Upper Pines campground.
“Very disappointed,” Lisa Salgado said. “We look forward to this all year. This is the trip of our summer.”
The group arrived Monday and had planned to stay through Saturday. Instead, they packed tents and other gear into vehicles, hoping they could find another campground elsewhere.
“So, this is a new memory,” said Miguel Martinez. “I’ve never been evacuated before.”

Yosemite Valley will be closed until at least Sunday, along with a winding, mountainous, 20-mile stretch of California’s Highway 41 that leads into the area, park spokesman Scott Gediman said.
At least 1,000 campground and hotel bookings will be canceled — to say nothing of the impact on daily visitors, park workers and small businesses along the highway, Gediman said. Rangers went to campsites one at a time to inform visitors of the closures. Hotels guests got phone calls and notes on their doors.
“This is the prime visitor season, so this wasn’t an easy decision to make,” Gediman said. “This was purely for safety’s sake.”
The last time the 7.5-mile-long valley was closed because of fire was 1990, he said.

Yosemite Valley is the centerpiece of the visitor experience, offering views of landmarks such as Half Dome, Bridal Veil Fall, El Capitan and Yosemite Falls. The glacial valley has been enveloped by a choking haze of smoke from the Ferguson Fire.


The fire command reported Wednesday morning that 3,434 personnel are engaging the Ferguson Fire. They are aided by 220 engines, 47 water tenders, 16 helicopters, 88 crews, and 59 dozers.
Over nearly two weeks, flames have churned through 60 square miles (38,522 acres) of timber in steep terrain of the Sierra Nevada just west of the park in Mariposa County. The fire was just 25 percent contained.
The fire was relatively calm throughout much of Tuesday night and into Wednesday morning as a heavy inversion layer kept fire activity to a minimum, officials said.

Mandatory evacuations are in place in several communities while other people have been told to get ready to leave if necessary.
The fire command reported Wednesday morning that 3,434 personnel are engaging the Ferguson Fire. They are aided by 220 engines, 47 water tenders, 16 helicopters, 88 crews, and 59 dozers.
One firefighter, Braden Varney, was killed July 14, and six others have been injured.
Community Meeting Wednesday Night
Representatives from the U.S. Forest Service, Cal Fire, and the Mariposa County Sheriff’s Office will present an overview of the current situation and containment efforts at 6 p.m. today at the
Greeley Hill Community Center.

Rhonda Salisbury, CEO of Visit Yosemite/Madera County, said the regional visitors bureau has been relocating tourists statewide following the closure.
“People are heartbroken,” she said. “Some want to ride it out for a few days and see if they can get back in the park.” Others want help finding places to stay away from Yosemite.
Gediman suggested valley visitors divert to Tuolumne Meadows, on Yosemite’s northern edge, or to Sequoia and Kings Canyon National Parks to the south.
“There are wonderful places to visit in the region, so we’re asking people to consider alternative plans,” he said. 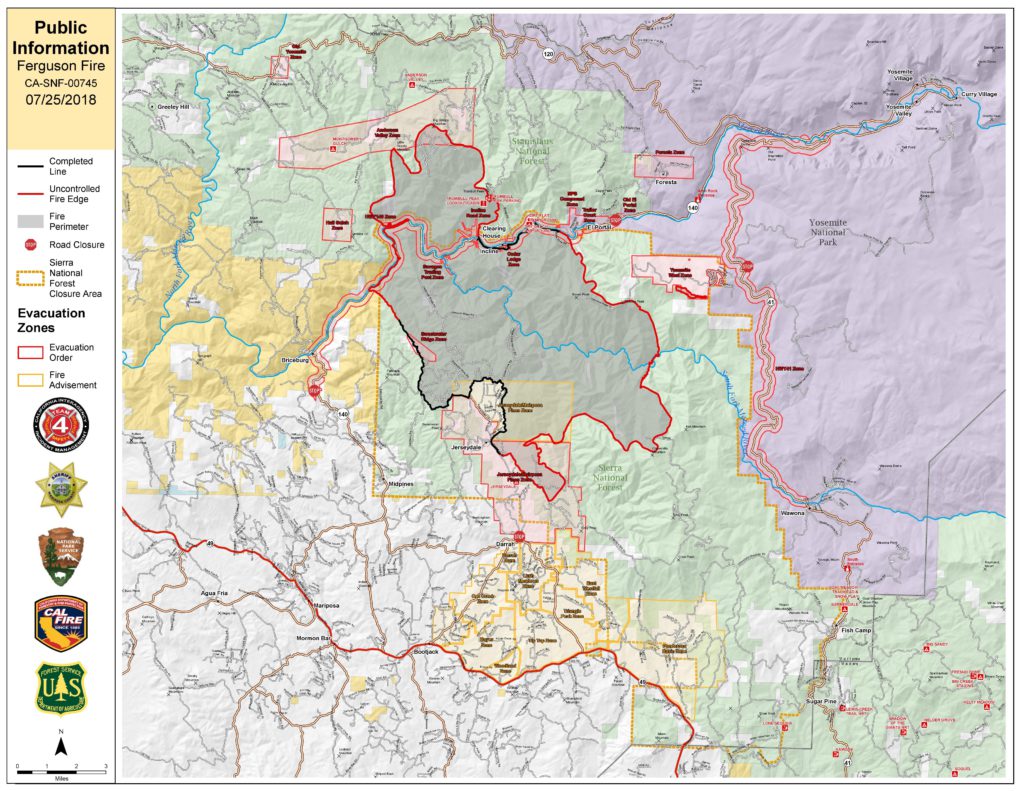 Ivanka Trump Is Shutting Down Her Clothing Company