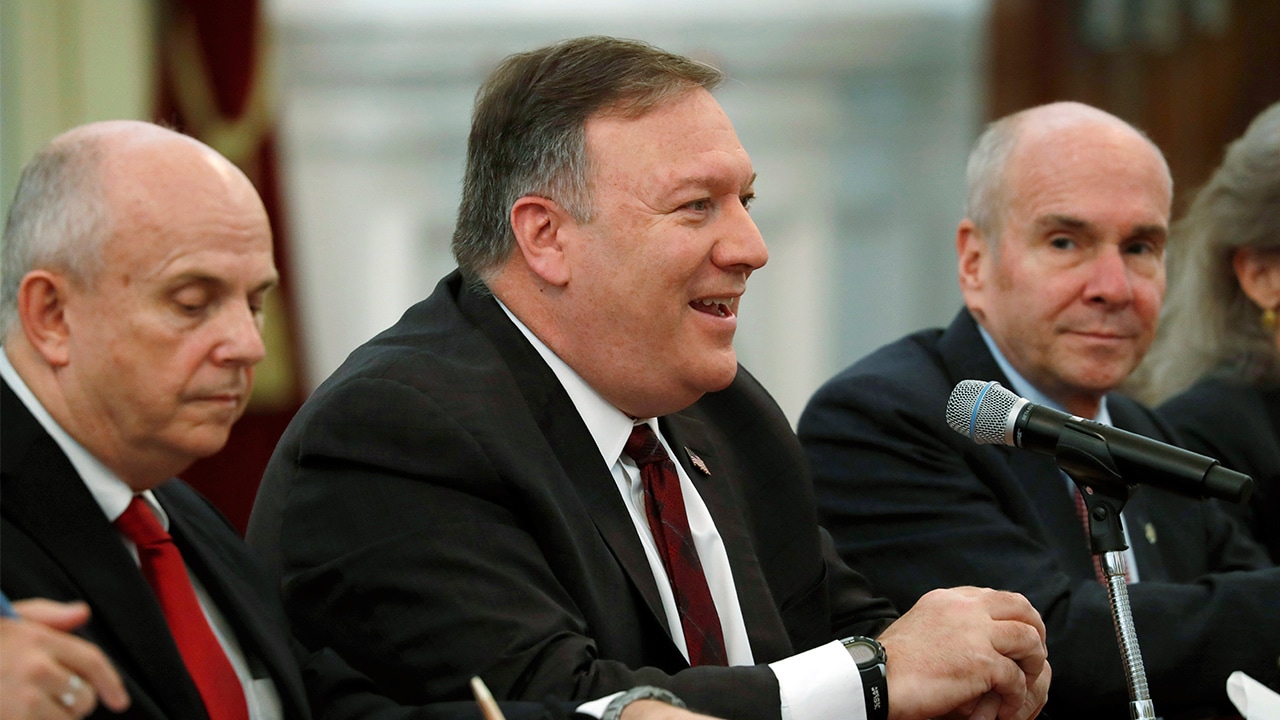 WASHINGTON — Secretary of State Mike Pompeo says renewed U.S. sanctions on Iran will be rigorously enforced and remain in place until the Iranian government radically changes course.
Speaking to reporters en route from a three-nation trip to Southeast Asia, Pompeo said Monday’s re-imposition of some sanctions is an important pillar in U.S. policy toward Iran. He said the Trump administration is open to looking beyond sanctions but that would “require enormous change” from Tehran.
“We’re hopeful that we can find a way to move forward but it’s going to require enormous change on the part of the Iranian regime,” he said Sunday. “They’ve got to behave like a normal country. That’s the ask. It’s pretty simple.”
European foreign ministers said Monday they “deeply regret” the re-imposition of U.S. sanctions.
A statement by European Union foreign policy chief Federica Mogherini and foreign ministers of France, Germany and the United Kingdom insisted that the 2015 Iran nuclear deal “is working and delivering on its goal” of limiting Iran’s nuclear program.

The ministers said the Iran deal is “crucial for the security of Europe, the region, and the entire world.”
A senior administration official said the United States is “not particularly concerned” by EU efforts to protect European firms from the re-imposition of sanctions.
The official was not authorized to discuss the matter by name and spoke Monday on condition of anonymity.


“Perhaps that will be the path the Iranians choose to go down. But there’s no evidence today of a change in their behavior. (In the meantime) we’re going to enforce the sanctions.” — Mike Pompeo, U.S. Secretary of State
The European Union issued a “blocking statute” Monday to protect European businesses from the sanctions set to snap back Monday at midnight.
The official says the U.S. will use the sanctions aggressively and cited Iran’s severe economic downturn this year as evidence the sanctions would prove to be effective despite opposition from the EU, China and Russia.
Pompeo called the Iranian leadership “bad actors” and said President Donald Trump is intent on getting them to “behave like a normal country.”
A first set of U.S. sanctions that had been eased by the Obama administration under the terms of the landmark 2015 Iran nuclear deal takes effect on Monday, following Trump’s May decision to withdraw from the accord. Those sanctions target Iran’s automotive sector as well as gold and other metals.
A second batch of U.S sanctions targeting Iran’s oil sector and central bank will be re-imposed in early November.
Pompeo noted that the U.S has long designated Iran as the world’s foremost state sponsor of terrorism and said it cannot expect to be treated as an equal in the international community until it halts such activities.
Related Topics:IranIranian governmentMike PompeosanctionsSecretary of Statesponsor of terrorismTrump administration
Up Next