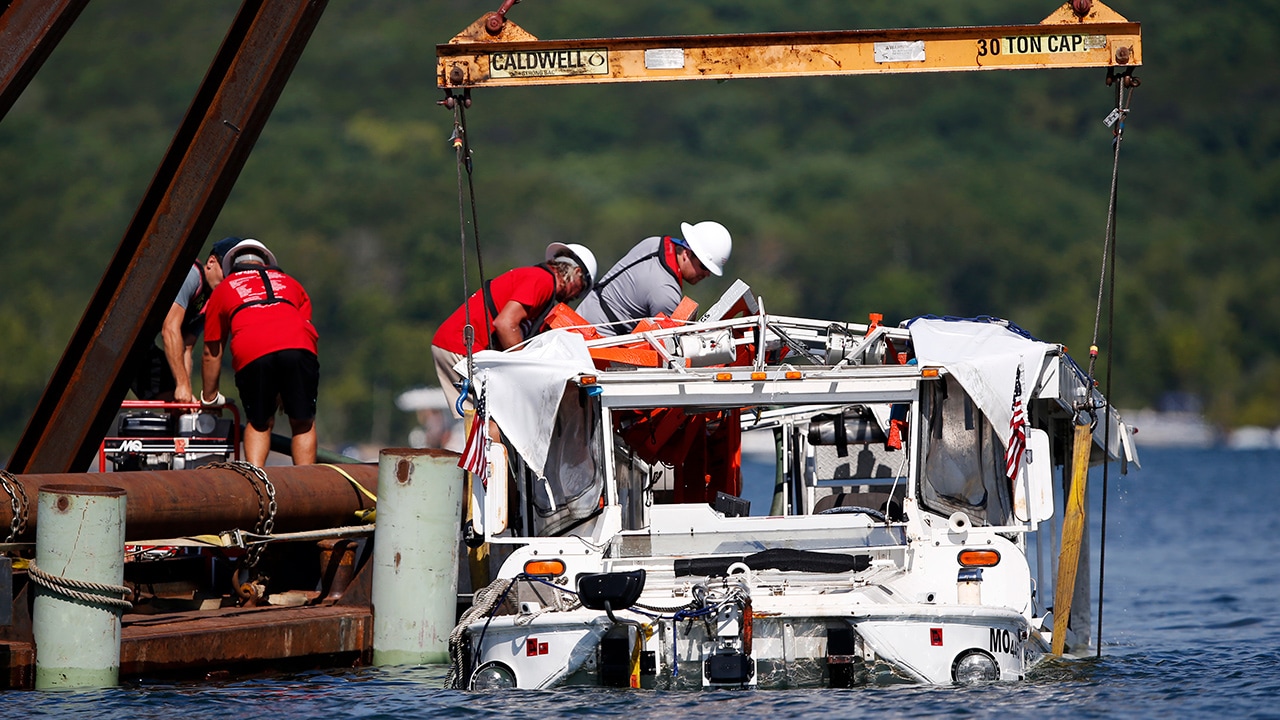 The investigation into the sinking of a sightseeing boat that claimed 17 lives will look at whether operators violated Coast Guard rules by venturing onto a Missouri lake as thunderstorms rolled in, a Coast Guard official said Monday.
More than three days after the deadly accident, a crane attached to a barge pulled the amphibious duck boat from Table Rock Lake near Branson, where it was submerged in 80 feet of water.
Divers attached a sling to the 33-foot, 4-ton vessel, then raised and drained it, officials said. It was to be loaded onto a vehicle and turned over to the National Transportation Safety Board.
Coast Guard Lt. Tasha Sadowicz of the agency’s St. Louis office said the boat that capsized and sank was known as “Stretch Duck 07.” Like all 22 duck boats in operation in Branson, it was required to undergo annual inspections. The most recent was in February.
But Sadowicz said the Coast Guard’s “certificate of inspection” placed limits on when the boats can enter the water based on wind speed and “sea state,” which refers to the height of waves.
Sadowicz did not have information on Stretch Duck 07’s limits but said they will be a focal point of the investigation.

Some witnesses have said the lake was calm and the storm came up suddenly Thursday evening. Sadowicz said investigators want to find out if operators were adequately monitoring the weather and should have reasonably known a storm was approaching.
Turbulent weather has caused trouble for duck boats before.
Coast Guard records show that a similar duck boat in Philadelphia took on a 3- or 4-foot wave on Oct. 3, 2015, as it carried 12 passengers on a tour of the Delaware River. Water got into the engine compartment, causing the engine to stall and setting the vessel adrift.
The boat was safely towed to shore. The cause of the failure was determined to be “the rapidly worsening river conditions.” But the Coast Guard also cited a “failure to anticipate the change in the weather conditions.”
“The change of the tide from slack to flood and the strong northerly winds caused the waves to quickly build and exceeded the restriction on the vessel’s COI (certificate of inspection),” the Coast Guard report stated.
Duck boats were designed for military use in World War II. The Missouri boat that sank was built in 1944.

Stretch Duck 07 Had Other Problems

Stretch Duck 07 had a few apparently minor problems in recent years.
In 2011, the vessel “lost steering while underway on Table Rock Lake” with 30 passengers on board. The driver was able to make it back to shore, according to Coast Guard records.
On June 6, 2015, water got into the engine compartment as the boat entered the lake from land, a process known as “splash down.”
A January 2016 inspection found inoperable heat detectors, which were later fixed.
The Coast Guard prohibited the vessel from operating from January 2015 to April 2015, but the report does not state a reason other than “hazardous/unsafe condition.” Another report from February 2015 cited leakage in a wheel well caused by sealant failure.
The owner of an inspection service in the St. Louis area said he issued a written report in August 2017 to the Branson duck boat operator, Ripley Entertainment, after inspecting two dozen boats. In the report, Steve Paul of Test Drive Technologies explained that the vessels’ engines — and pumps that remove water from their hulls — might fail in inclement weather. 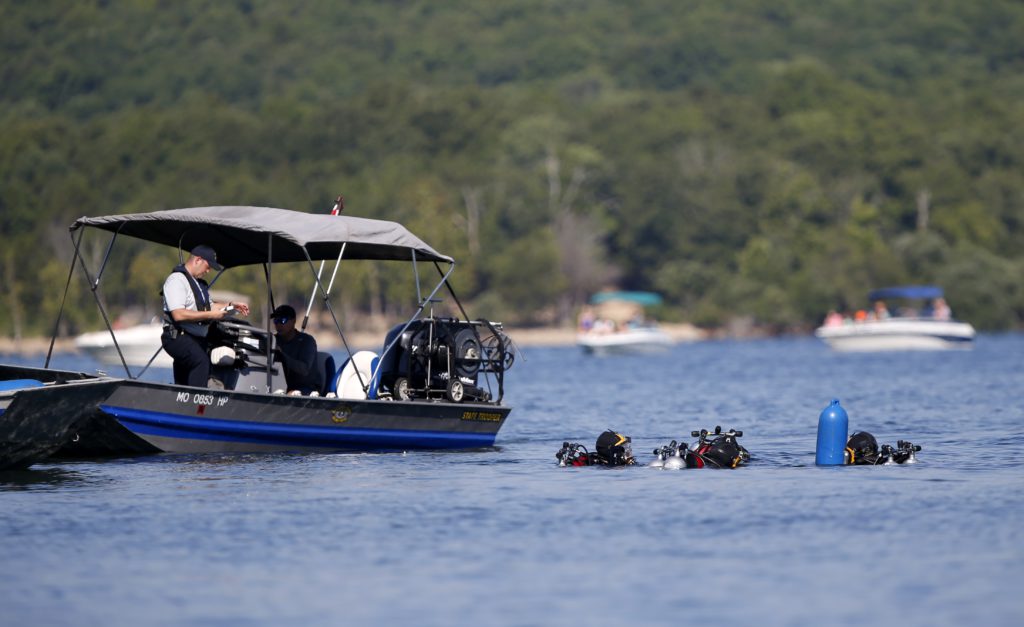 Duck Boats Prone to This Type of Accident

On Saturday, former NTSB chairman James Hall said the design of duck boats makes them prone to the type of accident that occurred in Missouri, particularly when weather turns bad. He said they should be banned.
At a news conference Monday in Branson, Coast Guard Capt. Scott Stoermer said the investigation will also look into whether the boat captain followed company guidelines regarding use of life jackets.
Missouri law requires boat passengers ages 7 and younger to wear life jackets, but commercial vessels like the duck boats are exempt. The law requires enough life jackets for passengers and crew, and jackets that fit all of the children. Whether to advise passengers to use life jackets is an “operation decision” made by the captain, Stoermer said.
Several survivors made it to safety by climbing aboard another sightseeing boat that was nearby.
Many survivors told Missouri State Highway Patrol chaplain Steve Martin that they were able to swim to the Branson Belle paddle-wheeler. Some climbed up the paddle wheel itself. Others clung to the side of the boat until bystanders pulled them to safety.
“The waves were kind of pushing them toward the boat,” Martin said.
Ripley Entertainment’s website said it was offering to pay for all medical and funeral expenses for victims, to return all personal items from the accident scene and to help with families’ travel or accommodations. The company also said it was offering grief counseling for its own employees.
Nine of the people who died belonged to one Indiana family. Others killed came from Missouri, Arkansas, and Illinois. The dead included five children. Fourteen people survived.
Divers recovered a video-recording device from the boat and sent it to the NTSB lab in Washington, D.C. Agency spokesman Keith Holloway said it was unclear what the recorder captured.