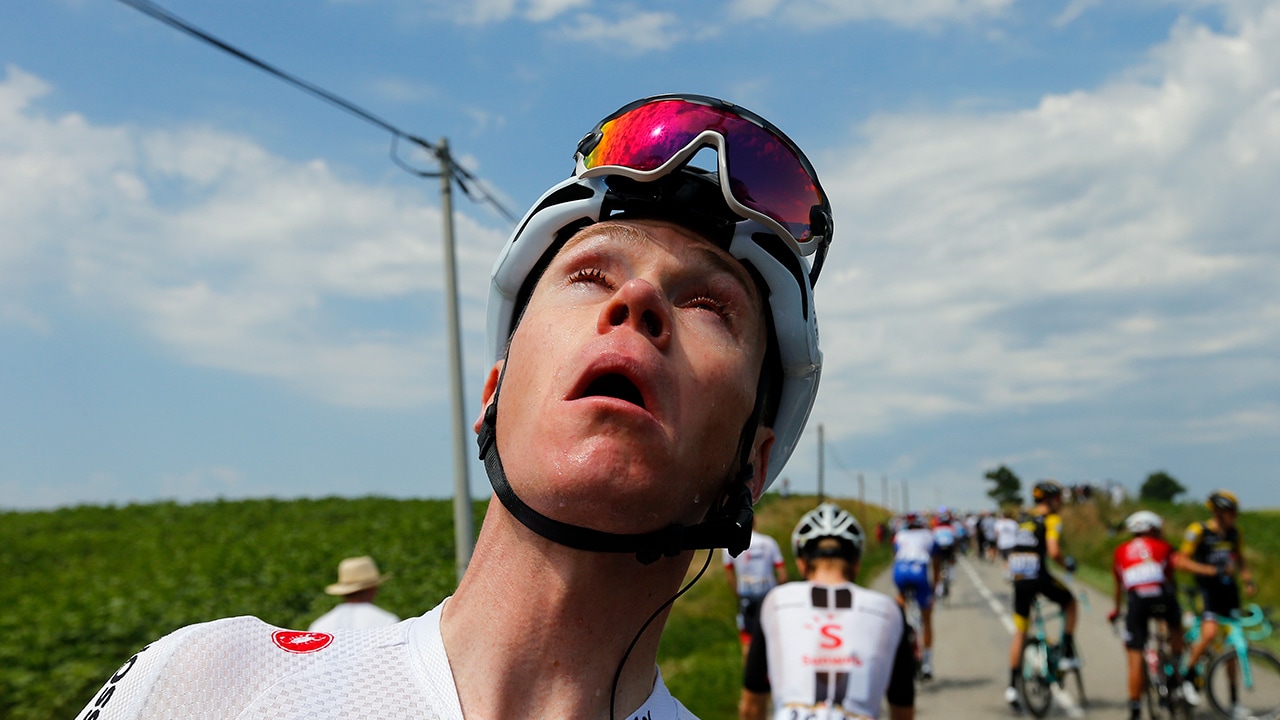 BAGNERES-DE-LUCHON, France — After fans had caused chaos in the Alps by setting off flares, tear gas from police accidentally played havoc with Tour de France riders during the first stage in the Pyrenees on Tuesday.
Four-time champion Chris Froome was among a large group of riders whose eyes needed treatment when police intervened to disperse farmers protesting funding cuts by disrupting cycling’s biggest race.
Bales of hay blocked the road 18.6 miles into the 135-mile stage from Carcassonne to Bagneres-de-Luchon. Tour organizers said police used tear gas to move the protesters as the peloton approached.
Four-time champion Froome, race leader Geraint Thomas, and world champion Peter Sagan were among those affected. Froome was treated with eye drops and Sagan poured water over his face to clean his eyes.
Stage 16 resumed after a 15-minute delay.


“I was lucky that it did not affect me too much, I had a bit of tingling in the back of the throat but I used some water to wash it out.”— Geraint Thomas, Tour de France race leader
Froome, who remained in second place overall, 1 minute, 39 seconds behind Sky teammate Thomas, said the effects of the gas did not last long.
“I just sprayed some water, water in the eyes, water on the face,” he said. “Just felt throat and nose were burning, eyes were burning afterwards. But I think quite a lot of riders were in a similar situation. I think we’re all grateful for temporary neutralization and to clear, to have a couple of (kilometers) to clear our eyes, nose out, then the racing continued again.”
Frenchman Pierre Latour, who wears the white jersey for the best young rider, said he noticed police were using tear gas when he arrived at the road blockade.
“With the headwind, the gas came back to the peloton. Lots of us had to stop to drink and douse water over our eyes,” Latour said.

Respect for the Riders

Tour director Christian Prudhomme condemned the farmers’ action and demanded more respect for riders.
“The road should remain free, we are not going to lock the riders in a stadium or on a tennis court,” he said. “The riders’ job is extremely dangerous, they are taking risks every day, people should not block the road, no matter what causes they are fighting for.”
Belgian classics specialist Greg Van Avermaet said race organizers made a good decision by neutralizing the stage, allowing the peloton to resume competing after three kilometers.
“I was not affected because I was not in the first 10 of the group,” he said. “I heard some of the guys had problems so I thought it was a good decision to stop and wait and bring everything together.”
According to a statement from French authorities in the local Aude department, a small group of 20 activists made the intervention to protest a planned reduction of European Union funding in their area. Standing on the side of the road with a herd of about 50 sheep, the farmers threw hay bales on the race route just minutes before the peloton arrived.

An Ugly Tour For Froome

This Tour has been marred by incidents.
Race organizers have struggled to deal with angry fans protesting Froome’s participation. After fans threw flares at riders in the climb to the ski resort of Alpe d’Huez, Tour organizers banned the use of smoke flares for the rest of the race.
Froome raced all season under the cloud of a potential ban for using twice the permitted level of salbutamol during his victory at the Spanish Vuelta in September. He was cleared only just before the Tour. He said he has been repeatedly spat at since the race started, and spectators have punched him and tried to make him fall off his bike.