WASHINGTON —President Donald Trump said Thursday he wants another meeting with Russia’s Vladimir Putin to start implementing ideas they discussed in Helsinki, casting the summit as a starting point for progress on a number of shared concerns.

Pushing back against criticism of first meeting, Trump accused the news media of trying to provoke a confrontation with Moscow that could lead to war, although concerns about the summit came have been raised by a broad cross-section of Republicans and Democrats.

Trump tweeted a list of topics discussed at the summit, including terrorism, security for Israel, Mideast peace, Ukraine, North Korea and more, and wrote: “There are many answers, some easy and some hard, to these problems… but they can ALL be solved!”

“I look forward to our second meeting so that we can start implementing some of the many things discussed,” he wrote. Trump also met with Putin last year in Germany and Vietnam.

Despite bipartisan criticism, Trump pointed blame at the media, tweeting: “The Fake News Media wants so badly to see a major confrontation with Russia, even a confrontation that could lead to war. They are pushing so recklessly hard and hate the fact that I’ll probably have a good relationship with Putin. We are doing MUCH better than any other country!”

“The Summit with Russia was a great success, except with the real enemy of the people, the Fake News Media,” he tweeted.

Numerous lawmakers have criticized Trump for his post-summit statements raising doubts about Russia’s meddling in the 2016 U.S. elections, and past and current intelligence community officials also differed with many of his statements.

Sen. Lindsey Graham, R-S.C., a Trump ally, acknowledged Thursday that Trump has had a “bad week” on Russia.

“I think it’s imperative that he understands that he’s misjudging Putin,” Graham told reporters. “I don’t think he was prepared as well as he should have been.”

Graham says Trump is right to criticize previous administrations for their handling of Russia. But he says Trump “is not making the problem better, he’s making it worse.”

Thursday marked the third day of Trump trying to manage the political fallout from his widely criticized performance at the summit meeting with Putin in Finland.

Putin, in his first public comments about the summit, told Russian diplomats Thursday that U.S.-Russian relations are “in some ways worse than during the Cold War,” but that the meeting with Trump allowed them to start on “the path to positive change.”

“We will see how things develop further,” Putin said, evoking unnamed “forces” in the U.S. trying to prevent any improvement in relations and “putting narrow party interests above the national interest.”

What Did Trump Really Say?

Trump had toughened his tone about Russia on Wednesday, saying in a CBS News interview that he told the Russian president to his face during Monday’s summit to stay out of America’s elections “and that’s the way it’s going to be.”

That rhetoric marked a turnabout from Trump’s first, upbeat description of the sit-down. Still, Trump backtracked on whether Russia is currently targeting U.S. elections. Asked the question Wednesday, he “no” answer put him sharply at odds with recent public warnings from his own intelligence chief.

Hours later, the White House stepped in to say Trump’s answer wasn’t what it appeared.

The zigzagging laid bare the White House’s search for a path out of trouble that has dogged the administration’s discussions of Russia from the start, but spiraled after Trump’s trip to Helsinki.

The scale of the bipartisan outcry at Trump’s stance toward Putin has only been rivaled by his 2017 waffling over condemning white supremacist demonstrators in Charlottesville, Virginia.

Trump has refined and sharpened his presentation since Helsinki.

At the news conference with Putin, he was asked if he would denounce what happened in 2016 and warn Putin never to do it again, and he did not directly answer. Instead, he delivered a rambling response, including demands for investigation of Hillary Clinton’s email server and his description of Putin’s “extremely strong and powerful” denial of meddling.

Trump asserted Wednesday at the White House that no other American president has been as tough on Russia. He cited U.S. sanctions and the expulsion of alleged Russian spies from the U.S., telling reporters that Putin “understands it, and he’s not happy about it.” 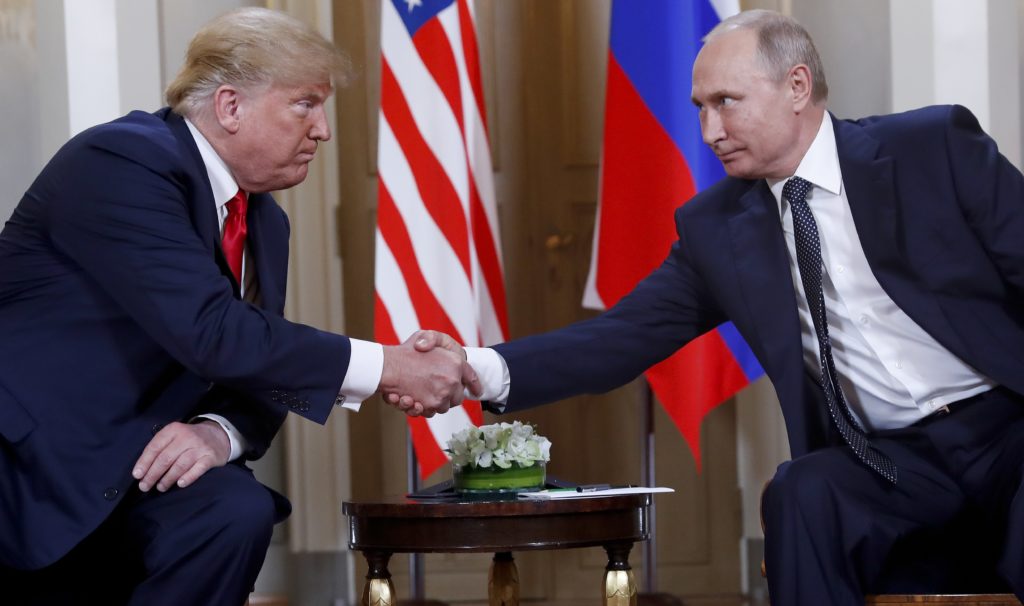 The muddied waters have deepened critics’ concerns that Trump is not taking threats to the U.S. electoral system seriously enough. Pressed on why Trump has repeatedly passed on opportunities to publicly condemn Putin’s actions, press secretary Sarah Huckabee Sanders suggested Trump was working to make the most of an “opportunity” for the two leaders to work together on shared interests.

One such opportunity is what Trump termed an “incredible offer” from Putin to allow the U.S. access to Russians accused of election hacking and other interference. In exchange, Putin wants Russian interviews of Americans accused by the Kremlin of unspecified crimes.

Sanders said Trump was still weighing the offer with his team, adding, “We’ve committed to nothing.” Russian officials have said they want to interview Kremlin critics Bill Browder and former U.S. Ambassador to Russia Michael McFaul.

McFaul tweeted Wednesday that he hoped the White House would denounce “this ridiculous request from Putin.”

Lawmakers have urged Trump to reject the deal.

A number of senators are swiftly signing on to a bipartisan bill from Sens. Marco Rubio, R-Fla., and Chris Van Hollen, D-Md., to slap new sanctions on Russia or any other country caught posting ads, running fake news or otherwise interfering with election infrastructure.

Sanders called the legislation “hypothetical” and declined to say whether the president would back it.

Two other lawmakers, Sens. Jeff Flake, R-Ariz., and Chris Coons, D-Del., will try to force a vote Thursday on a resolution backing the intelligence community’s findings that Russia interfered in the 2016 election and must be held accountable. A similar House vote Tuesday failed on a party-line vote.

At the Hudson Institute think tank in Washington last Friday, Coats said, “We are not yet seeing the kind of electoral interference in specific states and voter data bases that we experienced in 2016; however, we fully realize that we are just one click on a keyboard away from a similar situation repeating itself.”

His comments came the same day the Justice Department unveiled an indictment against 12 Russian military intelligence officers for their role in hacking Democratic groups during the 2016 campaign.