Gruden Is Back and Already Giving Back to the Game 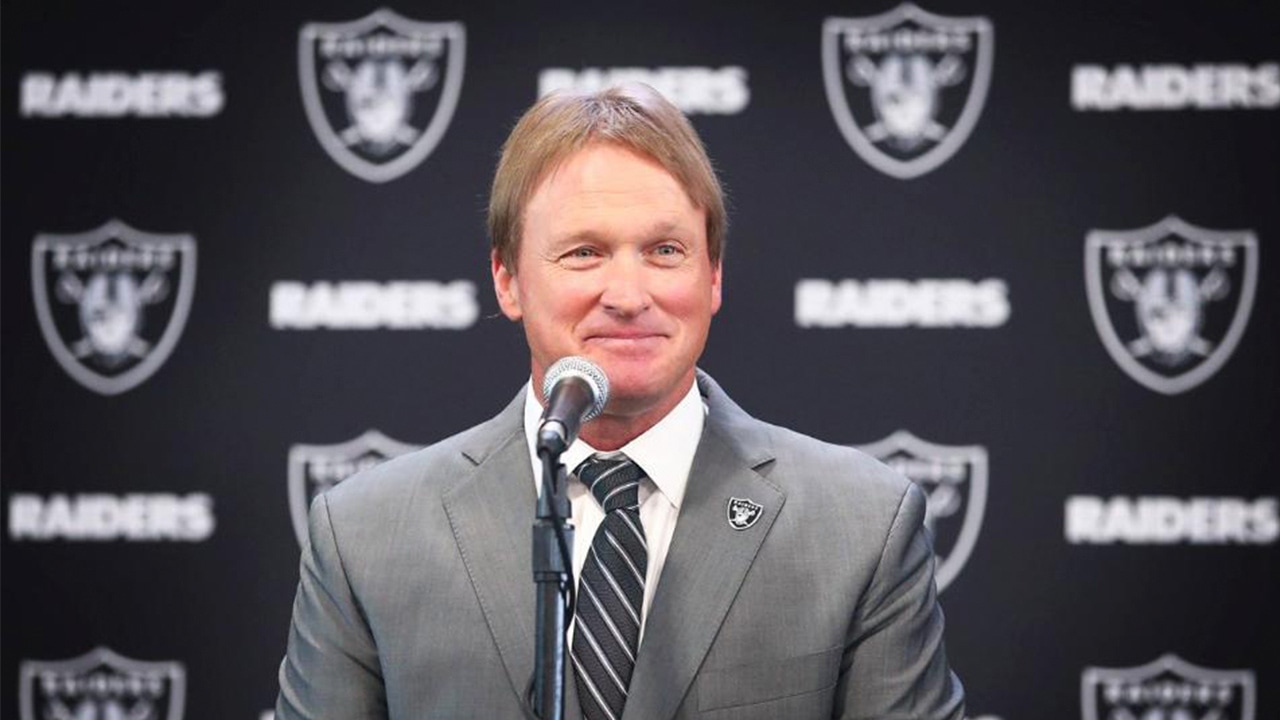 Jon Gruden is football through and through. It doesn’t matter what level, what age, or where.


“Seeing these kids’ faces light up and knowing that sports will teach them so many valuable lessons they will carry with them off the field is really special.” — Raiders Coach Jon Gruden
The former and now current coach of the Raiders displayed that again Tuesday by overseeing the distribution of funds and equipment to four Oakland youth football programs through the DICK’S Sporting Goods Sports Matter Program. Gruden has been a major spokesman for that initiative for more than four years.

In the afternoon at Raiders headquarters, Gruden presented grants of $15,000 to the head coaches of McClymonds High School and Oakland Tech. He invited the coaches of both teams to the Raiders main office for a “special behind- the-scenes tour” and discussion of football in Oakland. When the tour ended, Gruden handed over the checks to the surprised coaches.
At night, coaches and players from the East Bay Panthers and San Leandro Crusaders headed to a “friendly scrimmage” at Burrell Field. When the teams ran onto the field, they were stunned to see new football helmets, pads, balls and water bottles laid out on the field for them.
Each league received a $50,000 grant.
“Being back in Oakland and getting back into coaching has only fired me up more to work with DICK’S Sports Matter program to help more kids have the opportunity to play,” said Gruden, who also gave the Panthers and Crusaders a pep talk. “Like so many other cities in the U.S., we have an issue with youth sports funding here in Oakland. Costs are rising — kids can’t afford to play and coaches can’t afford to coach.
“Seeing these kids’ faces light up and knowing that sports will teach them so many valuable lessons they will carry with them off the field is really special.”
Gruden encourages other youth sports program struggling to get by “to visit SportsMatter.org to apply for help.”
“If you give your absolute best effort on the field, the lessons that sports teach will stay with you forever, and help you to be your best in every part of your life,” he said.

Billions of Dollars Have Been Cut From School Sports Budgets

Oakland has an 18.9 percent poverty rate, and the highest crime rate of any city in California.
Many areas in cities across the country need funding for their youth sports and school athletic programs. According to Up2Us Sports, a nonprofit whose research, training, and on-the-ground initiatives empower sports programs to become an agent of positive social change, billions of dollars have been cut from school sports budgets in recent years. These cuts disproportionately impact students in low-income areas, and students from low-income families are four times more likely to decrease participation in sports due to costs.
Student-athletes have an 11 percent higher graduation rate than non-athletes, Up2Us Sports reports. The U.S. Department of Education adds that students who participate in sports are four times more likely to attend college.
DICK’S and its foundation created Sports Matter in 2014, pledging more than $50 million to support youth sports programs in need and raise awareness of the funding crisis. To date, Sports Matter has helped fund tens of thousands of youth sports programs and impacted hundreds of thousands of young athletes nationwide.
“It’s days like today that make it all worth it, and we can’t thank coach Gruden and DICK’S enough,” said Jacob Davis, president of the East Bay Panthers. “We love these kids and know how important sports are to keep them off the streets and doing positive things in their lives. This money will go a long way in helping our leagues survive and thrive.”