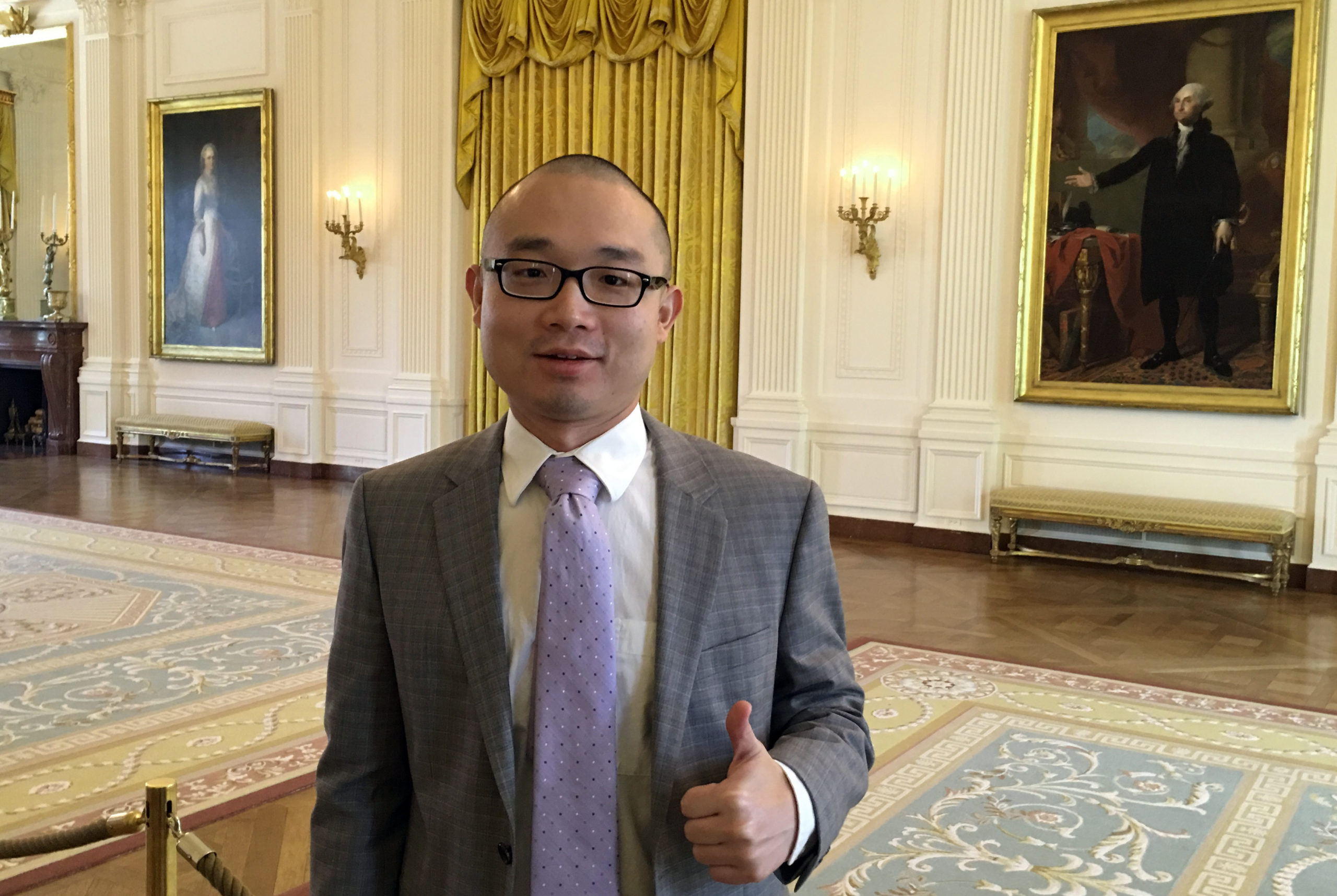 SAN FRANCISCO — Growing up in eastern China, Panshu Zhao fell in love with America. He read the Bible his parents gave him, watched Hollywood movies and studied the ideals of democracy. He jumped at the chance to attend graduate school at Texas A&M University.


“I need justice. This is America. This is not China. This is not the Middle East. This is not a dictatorship. And that’s why I love America.” — Discharged U.S. Army recruit Panshu Zhao
In 2016, Zhao enlisted in the U.S. Army as part of a special recruitment program offering immigrants in the country legally a path to citizenship.
The future, he said, was bright.
Now, he is one of the dozens of immigrant recruits and reservists struggling with abrupt, often unexplained military discharges and canceled contracts. They traded being willing to risk their lives for the prospect of U.S. citizenship, a timeworn exchange that’s drawn linguists, medical specialists and thousands of other immigrants to the military since the Revolutionary War.
“It’s just like you’re dropped from heaven to hell,” Zhao told The Associated Press on Friday.

It is unclear how many men and women who enlisted through the special recruitment program have been ousted from the Army, but immigration attorneys told the AP that they know of more than 40 recruits who recently have been discharged or whose status has become questionable.
Some recruits say they were given no reason for their discharge. Others said the Army informed them they’d been labeled as security risks because they have relatives abroad or because the Defense Department had not completed background checks on them.
The Pentagon said Friday that there has been no policy change since last year when Defense Secretary Jim Mattis said no one could enter basic training without completion of a background investigation.
And Army spokeswoman Cynthia O. Smith said that any enlistee entering the military undergoes security screenings.
“Each recruit undergoes an individualized suitability review and the length of time for the review is dependent upon each individual’s unique background,” Smith said. 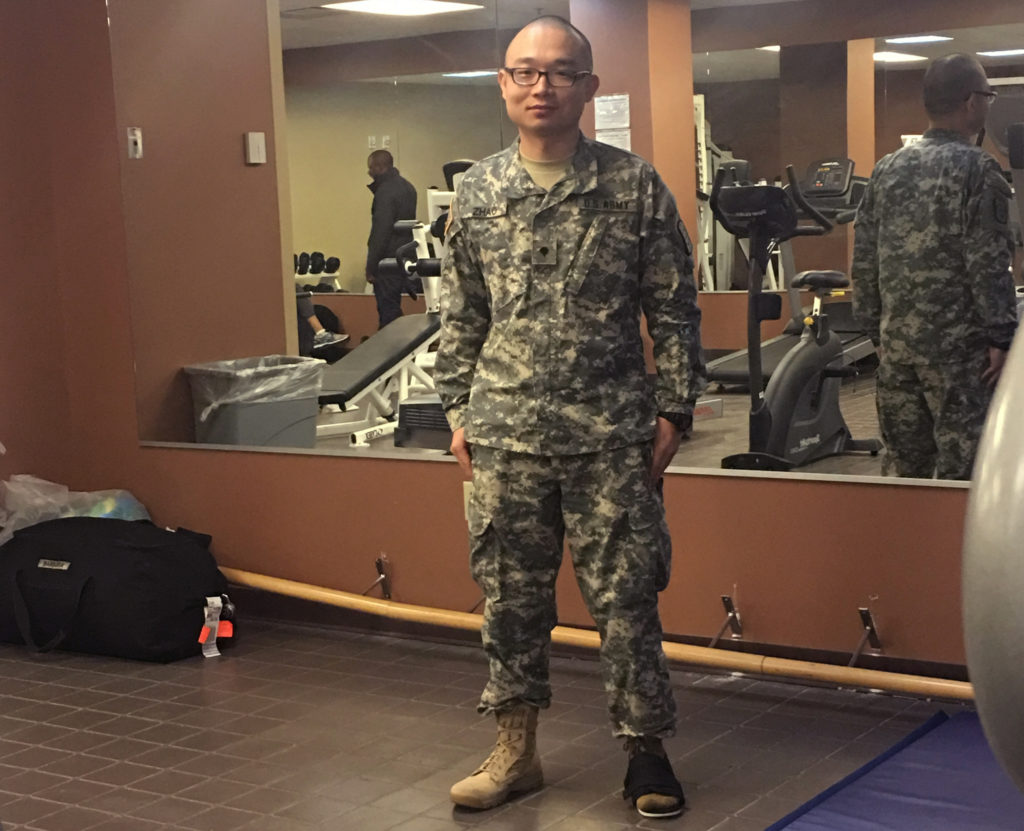 This photo provided by Panshu Zhao shows Zhao in uniform on Feb. 11, 2018, at a U.S. Army Reserve installation in Houston. “It’s just like you’re dropped from heaven to hell,” Zhao told the Associated Press on Friday, July 6, 2018. (Panshu Zhao via AP)

Zhao, 31, said his “ship out” date to basic training was delayed for two years as he underwent background checks, counterintelligence interviews and rigorous reviews added as requirements for immigrant enlistees.
He continued to pursue his Ph.D in geography at Texas A&M but also hit the gym, prepping for boot camp. And he trained — in uniform — with his unit. He had military identification and health care, he said.
In April, Zhao visited Washington, D.C., for the first time, touring the White House and visiting the Republican National Committee.
That same month, he got word from his unit commander: He was being discharged. He was told simply that his discharge was “uncharacterized,” he said.
“I’m not a national threat,” Zhao said. “On the contrast, I’m a national merit because people like me with higher education and critical skills, we want to serve this great U.S. Army. I’m a good scientist no matter what.”
To become citizens, immigrant recruits are required to have served honorably for 180 days. But the recently discharged members have had their basic training delayed, so they can’t be naturalized.
Immigration attorneys told the AP that many immigrants let go in recent weeks received an “uncharacterized discharge,” which is neither dishonorable nor honorable.

A Brazilian reservist, Lucas Calixto, filed a lawsuit in Washington, D.C., last week contending that he was booted without the Defense Department giving him a chance to defend himself or appeal.
President George W. Bush ordered “expedited naturalization” for immigrant soldiers in 2002 in an effort to swell military ranks. Seven years later, the Military Accessions Vital to the National Interest program, known as MAVNI, became an official recruiting program.
The program came under fire from conservatives when President Barack Obama added DACA recipients — young immigrants brought to the U.S. illegally — to the list of eligible enlistees. In response, the military layered on additional security clearances for recruits to pass before heading to boot camp.

Donald Trump’s administration added even more hurdles, creating a backlog within the Defense Department. Last fall, hundreds of recruits still in the enlistment process had their contracts canceled. A few months later, the military suspended MAVNI.
Republican Congressman Andy Harris of Maryland, who has supported legislation to limit the program, told the AP that MAVNI was established by executive order and never properly authorized by Congress.
“Our military must prioritize enlisting American citizens, and restore the MAVNI program to its specialized, limited scope,” he said.

According to Air Force Maj. Carla Gleason, a Pentagon spokeswoman, the “overwhelming majority” of MAVNI candidates are from Asia and Africa because those are the critical language skills needed in the military.
As of April, 1,100 immigrant recruits were awaiting basic training while undergoing security reviews, the Pentagon said.
Eligible recruits are required to have legal status in the U.S., such as a student visa, before enlisting. More than 5,000 immigrants were recruited into the program in 2016, and an estimated 10,000 are currently serving. Most go the Army, but some also go to the other military branches.
Zhao is now rethinking his future but said he wishes he had a chance to appeal.
“I need justice,” he said. “This is America. This is not China. This is not the Middle East. This is not a dictatorship. And that’s why I love America.”