In a single day, beverage companies, a wealthy real estate developer and the paint industry all withdrew initiatives that were poised to go before voters after winning something from the Legislature. A powerful business group and beverage companies persuaded the Legislature to enact a ban on local soda taxes through 2030; in exchange, its supporters spiked a measure that would have hindered cities and counties from raising taxes.

Putting a measure on the ballot — a process intended to give ordinary Californians more of a say in the laws that govern them — has become prohibitively expensive for people without personal wealth or interest group backing. It can cost millions to collect enough signatures to qualify a measure and many millions more to convince voters to pass it.

California is the largest of 24 states that let residents pass laws through ballot initiatives, according to the National Conference of State Legislatures. It’s not the only place where corporations have used ballot measures to pressure government.

After Seattle passed a $275-per-worker tax on companies to fund homeless services and affordable housing, Amazon and other companies began funding an effort to repeal it at the ballot. The City Council reversed course and repealed the tax soon after. And in Massachusetts, policymakers passed a law to raise the minimum wage and expand paid leave this year as part of a deal to keep some measures off the November ballot.

In California, some lawmakers accused powerful interests of weaponizing the ballot process to ensure concessions, but others said threatening a ballot initiative brought lawmakers to the table on issues they’d otherwise avoid. A law passed in 2014 allows proponents to withdraw measures if they reach a compromise with lawmakers.

“It is truly not what should be happening in a well-functioning democracy,” Nalder said. “Although a wealthy individual might end up doing something that’s good for the state, there’s no guarantee of that.”

In California, initiatives cannot be altered after they are placed on the ballot and are very difficult to change once enacted. There’s more room for refinement in the legislative process.

Democratic Assemblyman Evan Low said initiatives don’t face the same line-by-line scrutiny and refinement as bills. Initiative backers also don’t have the same accountability as lawmakers, who can be voted out of office, he said.

“With the initiative process, how do we hold the soda industry accountable?” Low asked. “Do you write to Pepsi?”

Democrats harshly criticized the soda industry before passing a law barring local soda taxes for the next 12 years. Shortly after Gov. Jerry Brown signed the ban into law, the California Business Roundtable withdrew an initiative primarily funded by the beverage industry that would have crippled local governments’ ability to raise any taxes.

The California Medical Association and the California Dental Association filed an initiative Monday for the 2020 ballot to overturn the ban and tax soda statewide. In a statement, the associations accused the soda industry of holding the Legislature “hostage.” 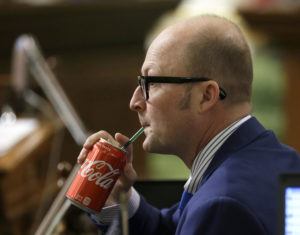 Assemblyman Matthew Harper, R-Huntington Beach, sips a Coke as Assembly members debate a ban on local soda taxes, Thursday, June 28, 2018, in Sacramento, Calif. Lawmakers passed a bill to ban local taxes on soda for the next 12 years. Harper did not cast a vote on the bill. (AP Photo/Rich Pedroncelli)

William Dermody, a spokesman for the American Beverage Association, rejected the idea that the industry’s backing of the anti-tax initiative was improper. He said soda companies supported it because it aimed to keep all taxes lower and help “keep groceries more affordable for people.”

“Beverage companies are active members of the communities in California and across the country, employing and supporting thousands of people and local businesses who are hurt by these kinds of taxes,” he said. “That’s why we stood up with those local businesses and consumers.”

Paint Companies Get Their Way on Lead Cleanup

On data privacy, San Francisco real estate developer Alastair Mactaggart forced lawmakers to the negotiating table by spending $3 million to qualify an initiative for the ballot. It aimed to give Californians more control over their data, including letting them prevent companies from selling it.

Lawmakers passed a law with many similar provisions to pre-empt the ballot measure. Even some opponents asked lawmakers to pass it in the hopes it will be amended later. Mactaggart said he financed the ballot measure because lawmakers weren’t doing enough to protect consumers’ data privacy due to the telecommunication industry’s power over the Legislature.

“The Legislature could have taken on this issue at any point since I’ve been in the Legislature, and we chose not to because it was difficult,” he said in a committee hearing last week. “The initiative process has actually worked quite well because we’re now delving into an issue that we know is very important to the public.”