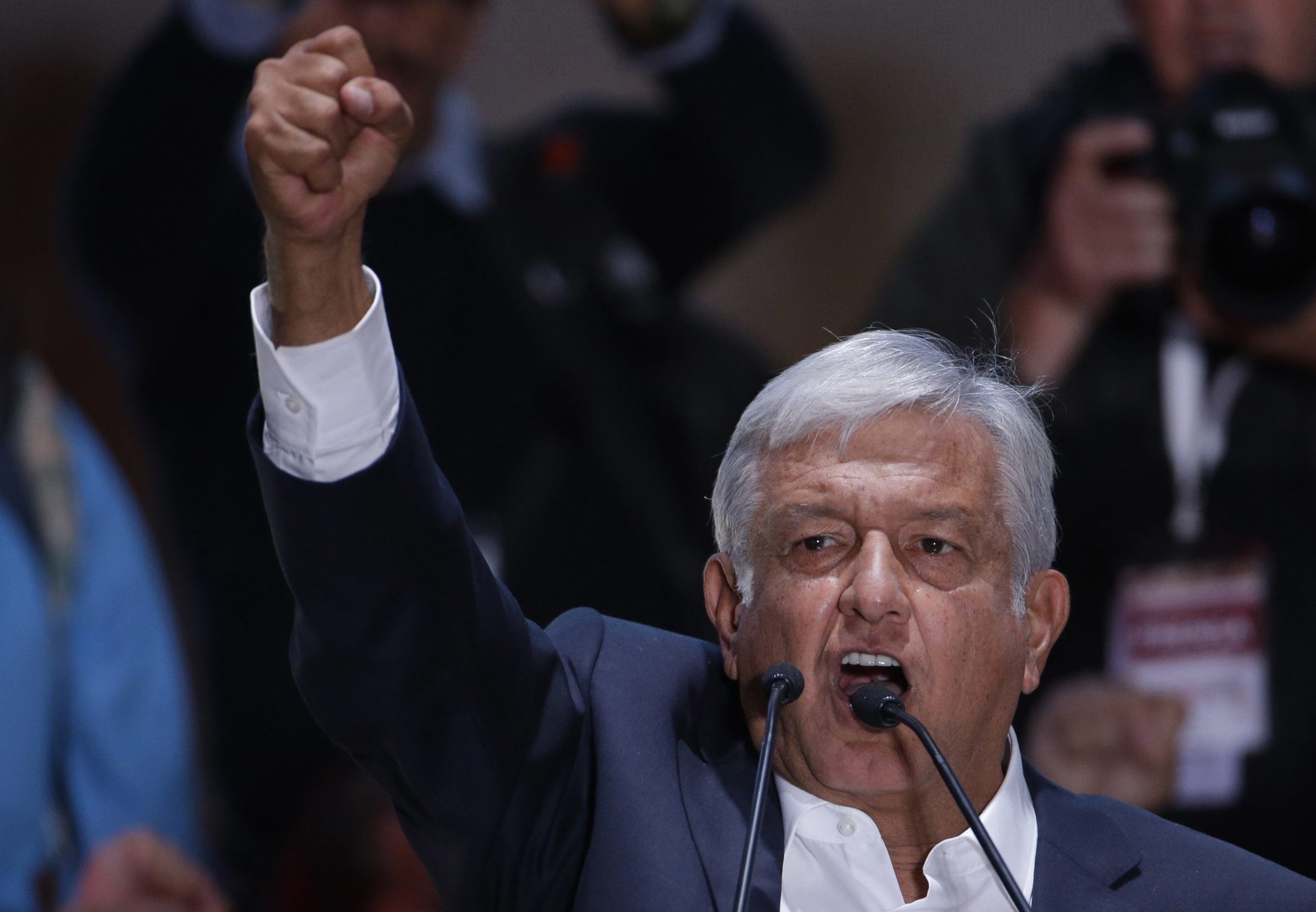 
“We are never going to disrespect the U.S. government because we want them to respect us.” — Andres Manue Lopez Obrador
Lopez Obrador said in an interview Monday with the Televisa news network that Trump’s Tweet Sunday night “was very respectful. That is what we always want to maintain with the U.S. government, that there be mutual respect.”
Trump tweeted Sunday that “I look very much forward to working with him. There is much to be done that will benefit both the United States and Mexico!”

Congratulations to Andres Manuel Lopez Obrador on becoming the next President of Mexico. I look very much forward to working with him. There is much to be done that will benefit both the United States and Mexico!

“We are never going to disrespect the U.S. government because we want them to respect us,” Lopez Obrador said. “At the appropriate moment, we are going to get in touch, to reach an understanding” with the Trump administration.
“We are conscious of the need to maintain good relations with the United States,” he added. Lopez Obrador had been compared to Trump for his populist, nationalist rhetoric and sometimes touchy personality — as well as his past skepticism about the trade deal.

But Lopez Obrador said he supports reaching a deal on renegotiating the North American Free Trade Agreement with the United States and Canada. The talks have been stalled over the Trump administration demands for higher U.S. content and a “sunset clause” in the 1994 trade agreement.
Lopez Obrador said he will propose that his own team of experts be included in the talks. The winning candidate said he will make that proposal in a meeting Tuesday with current President Enrique Pena Nieto.
Lopez Obrador told Televisa that he will respect the current team of negotiators, and let them continue representing Mexico until he takes office Dec. 1.
Lopez Obrador said he wants to have information on what’s being discussed and “to help as much as we can.”

With just over half of votes counted on Monday, Lopez Obrador had about 53.7 percent of the votes, a remarkable margin not seen in the country for more than three decades.
A prominent exit poll predicted his party allies were poised to score big victories in congressional and governorship races.
Lopez Obrador, who campaigned on vows to transform Mexico and oust the “mafia of power” ruling the country, rode widespread voter anger and discontent with the governing Institutional Revolution Party, or PRI, of President Enrique Pena Nieto and had led opinion polls since the beginning of the campaign.
The PRI, which dominated Mexican politics for nearly the entire 20th century and recaptured the presidency in 2012, was set to suffer heavy losses, not just for the presidency but in other races as well.

In brief remarks at a hotel in central Mexico City late Sunday, Lopez Obrador called for reconciliation after a polarizing campaign and promised profound change but with respect for the law and constitutional order. 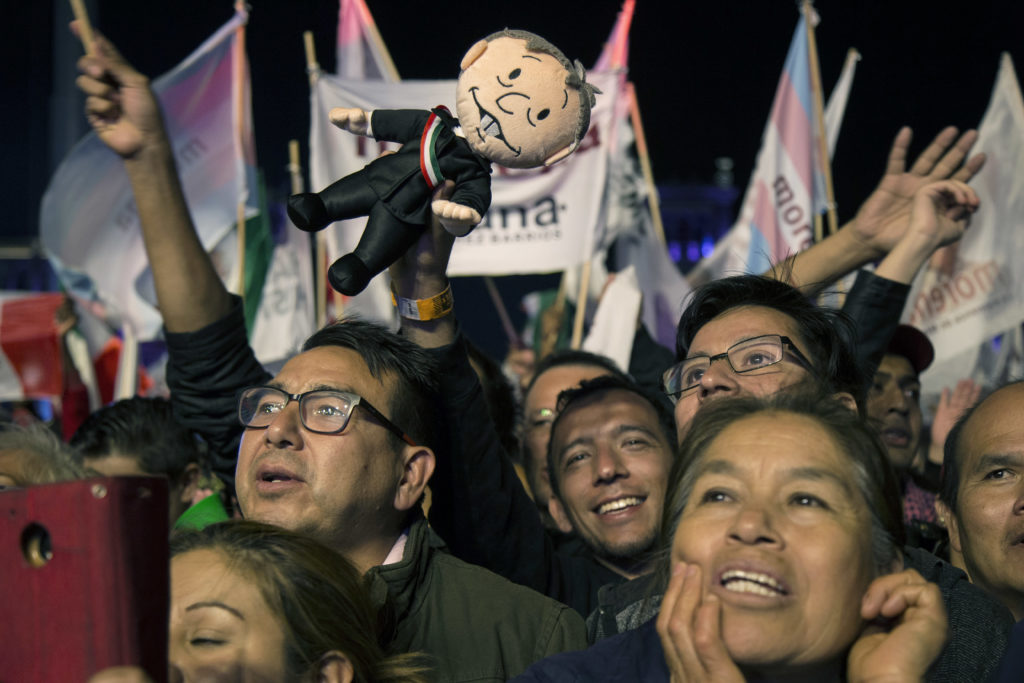 “I confess that I have a legitimate ambition: I want to go down in history as a good president of Mexico,” said Lopez Obrador, who had lost in the previous two presidential elections. “I desire with all my soul to raise the greatness of our country on high.”
Lopez Obrador said he would “seek to establish an authentic democracy and we do not intend to establish a dictatorship.” He said, “The changes will be profound, but in accordance with established order.”
Conservative Ricardo Anaya of a right-left coalition and the PRI’s Jose Antonio Meade acknowledged defeat shortly after polls closed nationwide. The quick count had them around 22 percent and 16 percent, respectively.

Property Rights Will Be Guaranteed

Lopez Obrador said individual and property rights would be guaranteed, promised respect for the autonomy of the central Bank of Mexico and said his government will maintain financial and fiscal discipline.
He said contracts obtained under energy reforms passed under President Enrique Pena Nieto will be scrutinized for any corruption or illegality, but otherwise contracts will be honored.
“There will be no confiscation or expropriation of assets. … Eradicating corruption will be the principal mission,” he said.

Lopez Obrador also spoke of reducing Mexican immigration to the United States through economic development.
“Mexicans will be able … to work and be happy where they were born,” he said.
And rather than the use of force to fight spiraling violence, he will look to fix root causes such as inequality and poverty.
Partial vote counts also showed probable gubernatorial wins for allies of Lopez Obrador’s Morena party in at least four of eight state races on the ballot plus for the head of government in Mexico City. The central state of Guanajuato was expected to go to a candidate of the conservative National Action Party.
The polling firm Consulta Mitofsky predicted Morena allies would take between 56 and 70 seats in the 128-member Senate and between 256 and 291 spots in the 500-seat lower house.

Fresh Grounds for Coffee: Study Shows It May Boost Longevity