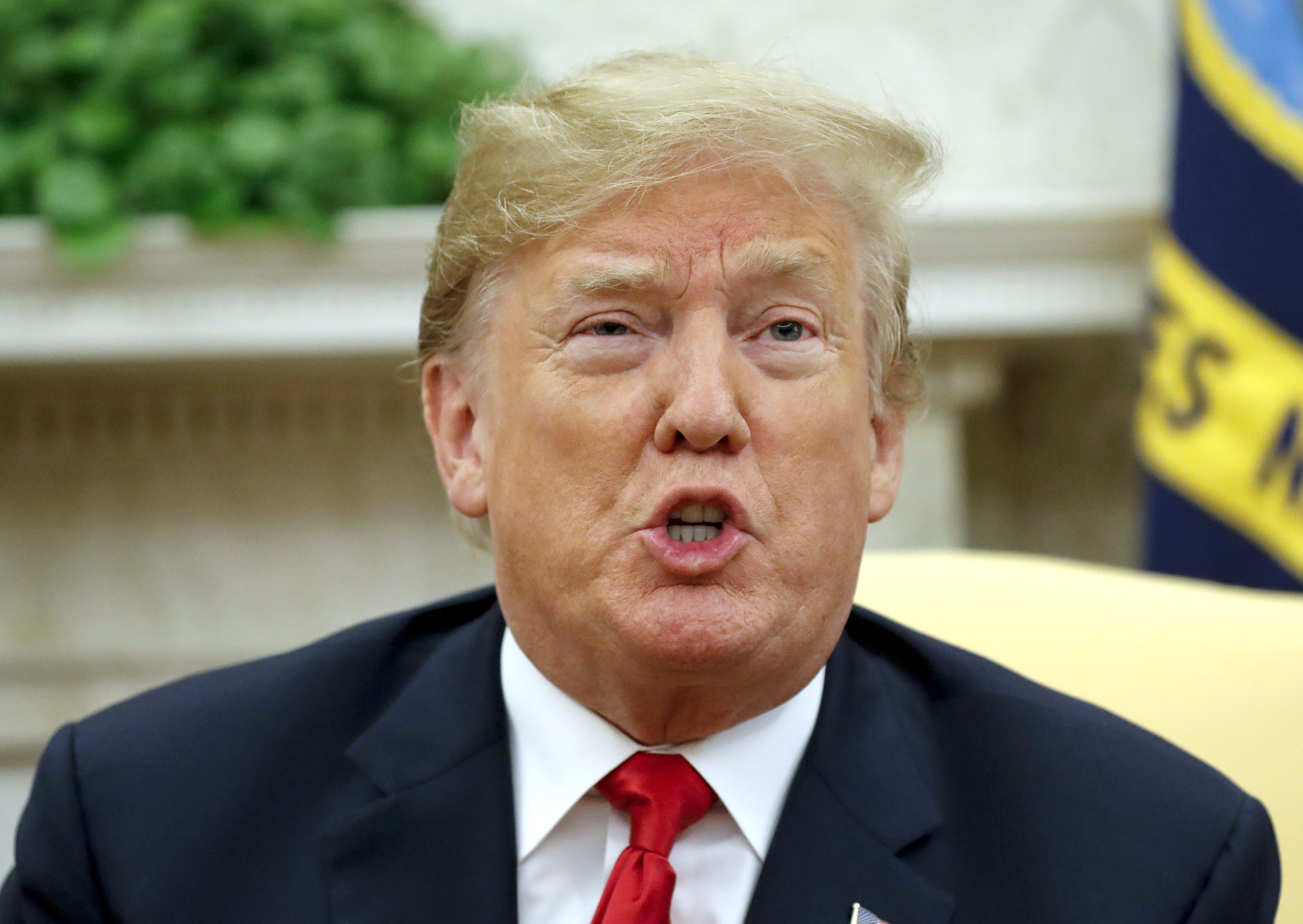 WASHINGTON — Justice Anthony Kennedy’s retirement is setting off a momentous confirmation battle for President Donald Trump’s next Supreme Court nominee that is certain to consume the Senate, inflame partisan tensions and shape the outcome of the midterm elections.
All sides quickly mobilized Wednesday after Kennedy — a singular voice on the court whose votes have decided issues on abortion, affirmative action, gay rights, guns, campaign finance and voting rights — sent shockwaves through Washington by announcing his retirement plans. Trump said he would start the effort to replace Kennedy “immediately” and would pick from a list of 25 names that he updated last year.
“We have to pick a great one. We have to pick one that’s going to be there for 40 years, 45 years,” Trump told supporters at a rally in Fargo, North Dakota, on Wednesday evening. “You know there’s so many elements (that) go into the making of a great justice of the Supreme Court.”

Senate Majority Leader Mitch McConnell declared that the Senate “will vote to confirm Justice Kennedy’s successor this fall.”
With Kennedy’s departure, Republicans have a longed-for opportunity to tip the balance of the court. It already has four justices picked by Democratic presidents and four picked by Republicans, so Trump’s pick could shift the ideological balance toward conservatives for years to come.
Republicans also have a chance to make judicial nominees a top campaign issue, which could help motivate conservatives and evangelicals to vote in November. The playbook worked in 2016, when Republicans rallied around McConnell’s successful block of then-President Barack Obama’s nominee to the court, Merrick Garland.

Only 51 Senate Votes Needed To Confirm

If Republicans unite behind Trump’s selection, there’s little that Democrats can do to stop it. Republicans changed the Senate rules last year so that Supreme Court nominees cannot be filibustered, meaning only 51 votes will be required to confirm.
Last year, Trump’s first nominee to the court, Neil Gorsuch, was confirmed 54-45, with three Democrats voting in favor. Those Democrats — Sen. Joe Manchin of West Virginia, Sen. Joe Donnelly of Indiana and Sen. Heidi Heitkamp of North Dakota— are facing difficult re-election races and could find it difficult to oppose the president’s second pick.

But while Republicans are aiming for speedy action, Democrats quickly argued that any decision should be put on hold until after midterm elections, citing McConnell’s 2016 moves. Senate Minority Leader Chuck Schumer, D-N.Y., said it would be the “height of hypocrisy” to vote sooner.
He said the voices of millions of Americans heading to the polls this fall “deserve to be heard.”
McConnell refused to consider Garland because it was a presidential election year. He said the seat should be left open for the next president to fill.
Sen. Chuck Grassley, R-Iowa, the chairman of the Judiciary Committee, told reporters that the 2016 delay on Supreme Court confirmations only applied to presidential election years. He noted that Justice Elena Kagan was confirmed in 2010, a midterm election year.

Abortion Will Be a Flashpoint

Another flashpoint in the court debate will be abortion rights, which puts a spotlight on key female Republican senators, Sen. Susan Collins of Maine and Sen. Lisa Murkowski of Alaska. Both have supported abortion access. The abortion issue could also prove difficult for Sen. Dean Heller of Nevada, the most endangered Senate Republican running for re-election this fall, whose views have shifted against abortion rights.
Schumer said the Senate should reject “on a bipartisan basis any justice who would overturn Roe v. Wade or undermine key health care protections.”
Speaking to reporters at the White House, Trump deflected a question on whether he should wait until after the midterm elections to announce a successor to Kennedy, saying he hasn’t “really thought about that. I think you want to go as quickly as possible.”
The president stressed his confidence in the picks on his list, saying, “You see the kind of quality we’re looking at when you look at that list.”
Some possible nominees being eyed include Thomas Hardiman, who serves alongside Trump’s sister on the Philadelphia-based 3rd U.S. Circuit Court of Appeals, and Raymond Kethledge, a federal appeals court judge who clerked for Kennedy.
Also of interest are Amul Thapar, a federal appeals court judge from Kentucky who is close to McConnell; Brett Kavanaugh, a former clerk for Kennedy who serves on the federal appeals court in Washington, D.C.; and Amy Coney Barrett, who serves on the federal appeals court in Chicago.

Among Trump’s counselors is Leonard Leo, who is taking a leave of absence as executive vice president of the Federalist Society to serve as an outside adviser to the process. Leo said Wednesday that it was important to first focus on Kennedy’s legacy and demonstrate appreciation. From there, he said, the “White House will begin to winnow the president’s list to a manageable short list.”
“The president has been very clear over and over what his standards are,” Leo said.
Senators were bracing for the tough days ahead.
Republican Sen. Ben Sasse of Nebraska, a member of the Judiciary Committee, bluntly talked of the “blood sport” likely to be triggered by the nomination fight.
“Americans ought to aim higher,” he said.

Putin, Trump Will Hold Summit in Helsinki on July 16

Amazon Wants To Set You Up in Delivery Business For $10K