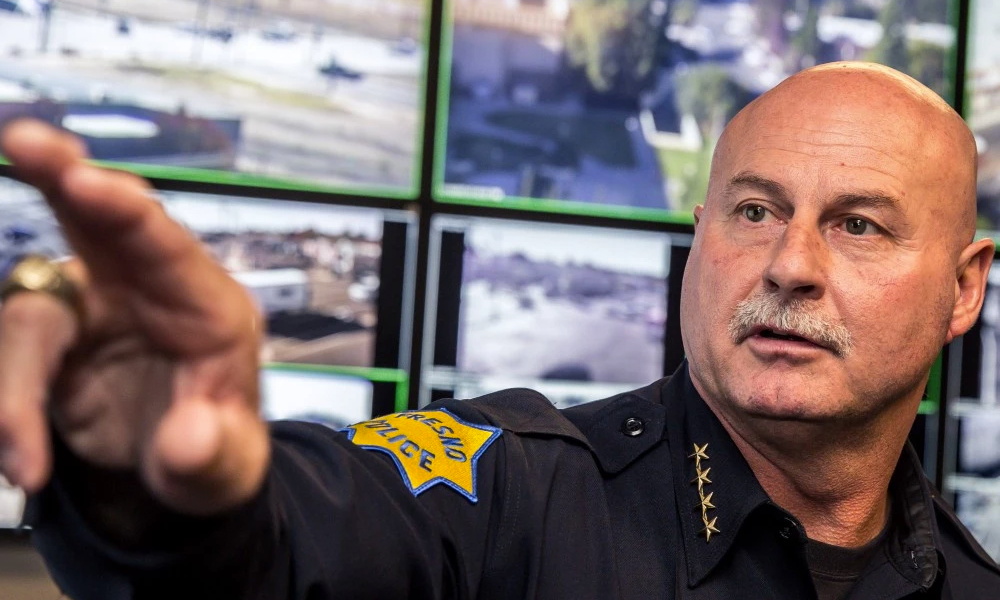 When he campaigned for mayor two years ago, Lee Brand often cited 1,000 sworn officers as the goal for the Fresno Police Department. Listen to any of his recent speeches, like during a recent campaign fundraiser, and his goal remains 1,000 officers.
Does Chief Jerry Dyer agree that 1,000 is the magic number?

During city budget hearings last week, Councilman Steve Brandau asked how many officers Dyer needed to run a successful department.
“I would say what we really truly need in this organization today would be about 900 officers, that would allow us to be able to do the things we need to do proactively in terms of reducing crime,” Dyer responded.
Today’s roster is 804 officers, although not every one of them is active because of injuries and long-term leaves of absence. The budget allows for 830 officers. Dyer says the department will be there soon, thanks to  a graduating cadet class and other new hires.
Keep in mind, there are discussions of placing a public safety tax on the November ballot. This would go along with a parks tax (that promoters are actively gathering signatures for), and a potential cannabis business license tax (which the city council will discuss placing on the ballot).
The deadline for ballot measures for the Nov. 6 election is Aug. 10.

The city is banking that green turns to green.
The Fresno City Council will vote Thursday (June 14) whether to place an initiative in front of voters detailing how to tax cannabis businesses. The city estimates such taxes would generate $3 million to $10 million annually.
However, regulations to allow medicinal (or recreational) marijuana shops are pending.
The city would place a $12 per canopy square foot tax on growing commercial marijuana and up to a 10% of gross receipts for retail operations.
The city would split tax revenue two ways: 90% to the general fund and 10% in a “Community Benefit Fund.” How to spend money in the latter fund would be decided upon by the city council, and dispensed through a nine-member commission, which the initiative would also create.
For a tax to go on the ballot, the approval of five council members is required. To become law, the tax initiative needs two-thirds passage from voters. In 2016, 51% of city voters approved Proposition 64 — the statewide initiative which legalized marijuana use.
GV Wire interviewed Councilman Clint Olivier, who is behind the tax plan. You can read and watch the interview here.

Fresno Unified trustees will consider hiring a consulting firm Wednesday night to conduct a survey “to gauge potential support for a potential parcel tax in support of education.” The superintendent’s office is asking the board to approve $41,750 to hire Fairbank, Maslin, Maullin, Metz & Associates of Los Angeles.

No New Central Superintendent Yet

After meeting nearly seven hours in closed session, the Central Unified school board did not announce the hiring of a new superintendent Saturday (June 9).
The board interviewed candidates at Central High School west campus Saturday in semi-secretive fashion. The board opened the special meeting in open session to a sparse audience. Only teacher Bernice Bailey spoke, urging the board to hold off hiring until after the November elections.
After closing the public portion of the meeting, the trustees and members of the district’s HR staff moved to another location on campus, away from any public scrutiny.
The superintendent is once again on the board’s closed session agenda for the regularly scheduled meeting Tuesday night.
The board fired Mark Sutton as superintendent on Feb. 27 without cause.
The meeting starts 6 p.m. at the Hodge Performing Arts Center on the Central High School east campus (3535 N. Cornelia Ave., Fresno).