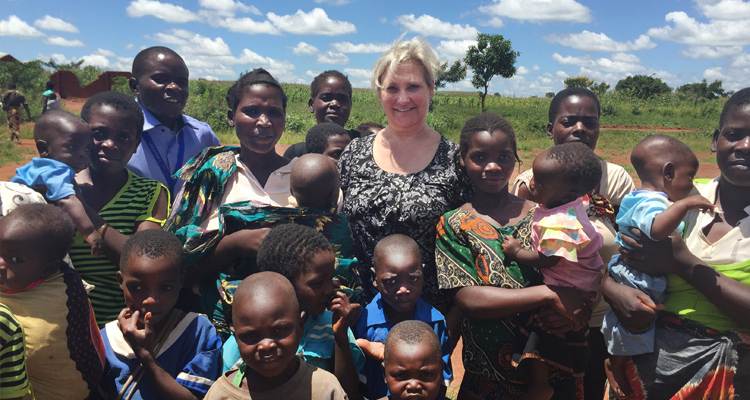 One of Fresno’s most remarkable people is fearless, compassionate and always ready to take on new challenges. She has been to war-torn Afghanistan nine times and can’t wait to touch down there again.

She’s a registered nurse, a respiratory therapist, an accountant, a fundraiser and a nonprofit executive. She has seen mothers give birth and coordinated the harvesting of donor organs from people declared brain dead.

“I’ve always had this passion for equality,” says Witcher, executive director of Alliance for Medical Outreach & Relief (AMOR). “If you have a goal, I will help you toward that goal.”

Based on what her team has accomplished in Afghanistan, the Mendota center — which will expand access to healthcare and house nine nonprofits already active in the area — will be a godsend.

You should know that Witcher’s office is 30 feet from my desk and that AMOR shares space with GV Wire on the Granville Homes campus. Those facts don’t change this fact: Witcher and AMOR are doing life-changing work.

Before Witcher joined AMOR in 2011, the nonprofit’s Afshar Hospital in Kabul and its community clinics served 2,300 patients monthly. The number is 7,000 a month now. Last year, 1,974 babies were delivered at the hospital. In addition, AMOR has brought all-important healthcare education and neonatal care to the country.

“It’s the best experience in the whole world. Knowing where we started and where we are now, there is no better reason to get up in the morning.” — Davena Witcher, on her visits to Afghanistan

Understand: 80% of Afghan women give birth in non-medical settings with no trained medical professionals on hand. To break through cultural barriers that in the past discouraged pregnant moms from accessing care, AMOR’s maternity, prenatal and community outreach units are now entirely staffed by women. Midwives go into surrounding neighborhoods to teach the importance of prenatal care, healthy diets and family planning.

Not only are babies delivered, lives saved and young children educated by AMOR, the hospital and 10 clinics employ 160 people — all of them Afghans and all hired without regard to gender, tribe or religion.

“Child and maternal mortality rates in Afghanistan are among the highest in the world. They have improved slightly in recent years, with the Afshar nursery at the forefront of attempts to expand and improve neonatal care and health practices among Afghan women,” The Los Angeles Times reported in 2013.

Why Is AMOR in Afghanistan?

Humanitarianism drives AMOR’s efforts. But something else is at work, too. It’s what some people call “soft power.”

Witcher says the goal is to show Afghans that America’s presence there isn’t only about its political and military interests.

“You are talking about a country where war has been traumatizing the people for three generations,” she says. “We need to build their trust. They need to know that we’re there for them.

“Our goal is to become their Rock of Gibraltar, so to speak, and give them something to stand on. When they’re healthy and they’re educated, they’ll be able to stand on their own.”

And those visits to Afghanistan?

“It’s the best experience in the whole world,” Witcher says. “Knowing where we started and where we are now, there is no better reason to get up in the morning.”

A Big Ask from Afghan Government

Even the Afghan government is taking notice of AMOR’s accomplishments. It has asked AMOR to establish a cardiology center.

“Not impossible,” Witcher says, “but we can’t do it alone. It will take lots of partners.” Aid packages are distributed at Aschiana Clinic in Kabul, Afghanistan

A Winding Road to Today

Born in a middle-class family, it was at Vandalia Elementary School in Porterville that a young Davena observed that many of her classmates, some of them Yokuts and many of them from migrant labor families, “just didn’t have what I have.”

There, too, Witcher witnessed the great equalizer in action from her mother, Doris, who taught fourth grade at the school.

“She had a gift,” Witcher says, “and a teaching method that brought every kid who was behind up to grade level by the end of the year. That impressed upon me the value of education.”

Raised in a strict home, she couldn’t wait to break loose and explore the world after graduating from Monache High School in 1981. It was off to Denver to learn accounting at a business school and then to a job in San Diego. But Witcher found crunching numbers in an office confining and uninspiring.

Returning to the Valley, she earned an associate’s degree in respiratory therapy at Freno City College and then joined Valley Children’s Hospital. Seven years later, she added a bachelor’s degree in nursing. Witcher says she was happy in her work on the hospital’s transport unit. She was part of a team that assisted with high-risk births in rural Valley communities. The work was fulfilling. But she was also curious about other ways she could serve others.

“I would go to where the donor was brain dead, stabilize the patient and register the organs into the transplant system,” Witcher says. “It was very rewarding, but not easy. It was emotionally exhausting.”

Why Build in Mendota?

While with the donor network, Witcher was asked to join AMOR’s board of directors. In 2011, she became AMOR’s development director — despite, she says “not knowing a thing about fund-raising.” In 2013, she moved up to the executive director.

AMOR’s board asked Witcher to fly to Afghanistan and Africa to check out sites for a second major project on the scale of Afshar Hospital. She spent three months in Asia and Africa. But the conditions she found there weren’t that much different than parts of the Valley.

A few years ago, AMOR’s board asked Witcher to fly to Afghanistan and Africa to check out sites for a second major project on the scale of Afshar Hospital. She spent three months in Asia and Africa. But the conditions she found there weren’t that much different than parts of the Valley.

“In Mendota, there are kids living in places with dirt floors, intermittent electricity and no wi-fi so they can do their homework,” Witcher says. “There’s a lot of good work going on in Mendota. So that raised the question, why are people still living in these conditions?”

That’s how the Mendota center became AMOR’s newest project. The rest of the world could wait. Children in AMOR’s own backyard needed a chance to grow up and prosper. Mendota needed to learn how to become a more nurturing community.

About 75,000 people — half of them undocumented immigrants who pick the crops for our dinner tables — live within a 15-mile radius of where the center will be constructed. Many of them are farmworkers who don’t have transportation to Fresno for medical care and access to specialists. Or they are working in the fields when any nearby health clinic is open.

The new clinic, which will be staffed and operated by Madera Community Hospital, will address those problems.

“At AMOR, we talk about dignity, empowerment and opportunity.  When you acknowledge someone’s dignity, they become empowered. They learn to take advantage of the opportunity in front of them.” — Davena Witcher

The community center will house nonprofits working in Mendota. AMOR will provide a program coordinator at the start and hopes to fund a youth services coordinator in the future.

“Nonprofits often occupy individual silos because of funding streams,” Witcher says. “That leaves them without the flexibility to address real needs. The community center provides the opportunity for everyone to team up.

“It takes all of us to solve problems. Everybody has to have a piece of the pie and nobody goes it alone.”

Witcher acknowledges that attracting donations for the project has been challenging at times. And she hears from nay-sayers. But she stays the course.

“Yes, there are drugs. There are gangs. There is alcohol abuse,” she says. “But we need to promote opportunity for those who want it.

“At AMOR, we talk about dignity, empowerment and opportunity.  When you acknowledge someone’s dignity, they become empowered. They learn to take advantage of the opportunity in front of them.”

Witcher’s Words To Live By

Witcher says that her Afghanistan experiences better equipped her for the Mendota effort: “What I learned is, you can’t fix a problem unless you’re willing to work at it relentlessly.”

Those are words to live by.

So, too, are the words of Marcus Aurelius that hang on a wall in her office:

“The happiness of your life depends on the quality of your thoughts.”