Dan Richard, the longtime chairman of the California High-Speed Rail Authority, told a Bay Area newspaper columnist Thursday that he is “OK” with allowing voters a second say on the controversial, budget-busting bullet-train project.
“I actually would be OK with that,” Richard told Richard Borenstein, a columnist and editorial page editor of the East Bay Times. “I do think this is a choice that people ought to make. … At some point, sure, I’m happy to call the question with the voters.”

“I do think this is a choice that people ought to make. … At some point, sure, I’m happy to call the question with the voters.” — High-Speed Rail Authority Chair Dan Richard
Richard’s comments came six days after the rail authority revealed that the cost of connecting Los Angeles to San Francisco would be $77.3 billion and could rise as high as $98.1 billion. That was an increase of about $13 billion from 2016 estimates.
In addition, the rail authority said in its 2018 draft business plan released March 9 that the full system would not begin operations until 2033. The authority also pushed back the opening of the statewide bullet-train system’s first phase —San Francisco to Bakersfield — by four years to 2029.
Noted Borenstein in his column: “In 2008, the ride from Los Angeles to San Francisco was forecast to take about 2 1/2 hours and cost $50 one-way, or about $61 in today’s dollars. Today, the authority estimates the ride will take nearly three hours and the fare will be $93.”

Voters approved the project, which was placed on the ballot by the Legislature, 52.7% to 47.3% in 2008. Proposition 1A authorized the state to issue $9.95 billion in bonds for high-speed rail. The remainder of the construction funding, proponents said, would come from the federal government and private investors.
To date, private investors have contributed nothing. Federal funding has stalled at the $3.5 billion provided by the Obama administration before the Republicans gained control of Congress.
But contributions from California’s cap-and-trade program are keeping the project afloat. High-speed rail is counting on $8 billion from the fund through 2030. 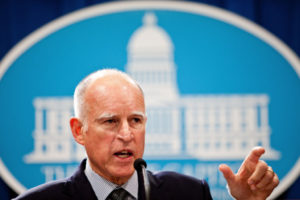 Despite the construction delays and soaring costs, Gov. Jerry Brown remains a big supporter of high-speed rail. In fact, he wrote an open letter to President Donald Trump this week exhorting him to back California’s ambitious but troubled effort.
“You have lamented that ‘we don’t have one fast train’ in our country,’ ” Brown wrote. “Well, Mr. President, in California we are trying to fix that. We have a world-class train system under construction.”
You can read Borenstein’s entire column at this link.