Bredefeld Floats Money Back Guarantee. Will it Sink or Swim? 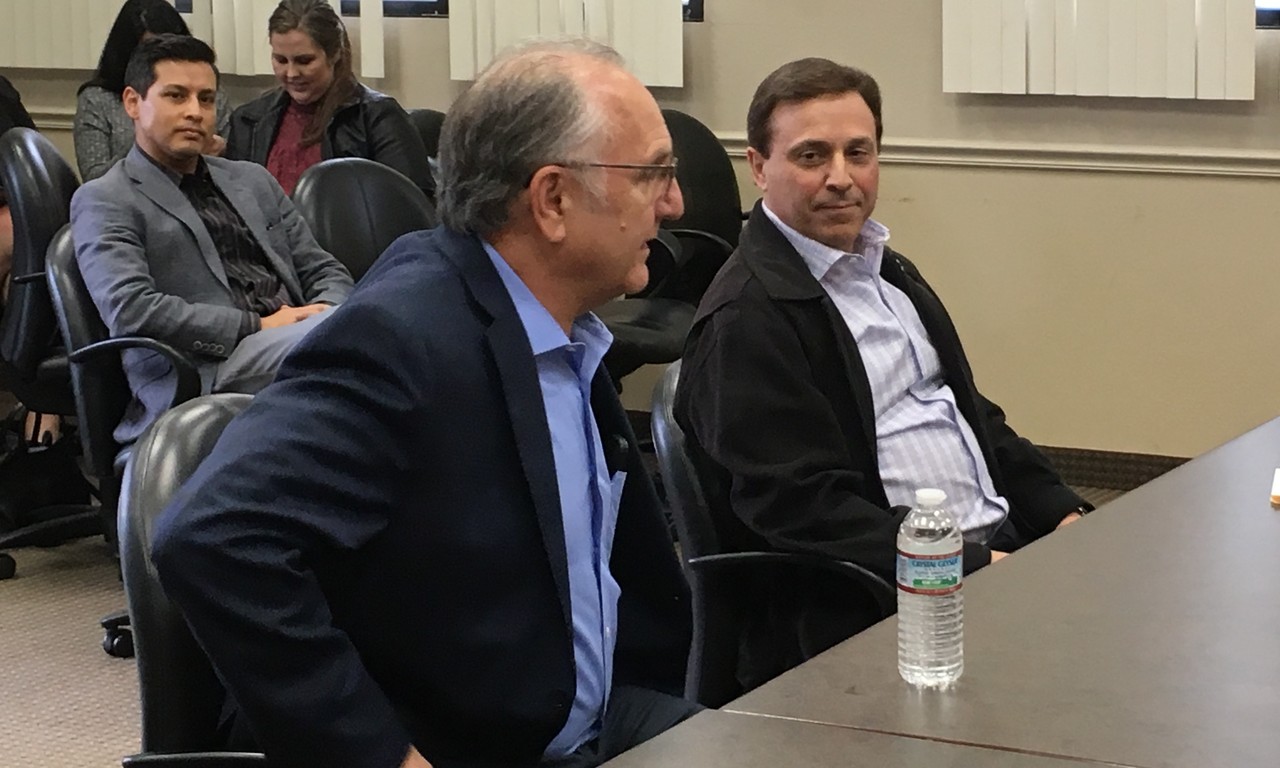 Dueling ideas for improving Fresno’s reputation for business friendliness are headed for another showdown.
Fresno City Councilman Garry Bredefeld plans to officially introduce his “Money Back Guarantee” ordinance to his colleagues next Thursday (March 22).
Showdown No. 1 happened Wednesday at the Fresno Chamber of Commerce Government Affairs Council in a meeting with an ever-changing agenda, social media influence and a surprise appearance by Fresno Mayor Lee Brand.
Brand, who does not support Bredefeld’s proposal and has organized his own panel of experts to help fix the problem, won that round.
“The Chamber’s Government Affairs Council voted to oppose Councilmember Bredefeld’s money-back guarantee proposal,” Chamber President/CEO Nathan Ahle said.
But the mayor also held the door slightly ajar to incorporating a money back guarantee into his own efforts to stimulate the Fresno economy.

Bredefeld floated his plan in January, under a simple premise: Fresno has long been business unfriendly — improve it by fixing the planning department.


“The Chamber’s Government Affairs Council voted to oppose Councilmember Bredefeld’s money-back guarantee proposal.” Chamber President/CEO Nathan Ahle
On Wednesday, Bredefeld filled in the details, previewing his plan for the GAC, which is composed of a cross-section of Fresno business interests. While the GAC has no official legislative authority, politicians value its role as a supporter of new ideas.
The GAC’s vote came in closed session. Ahle would not reveal the final tally nor the flavor of the debate behind closed doors.
Publicly, anyway, GAC members gave Bredefeld’s proposal a mixed reaction.

During the meeting Wednesday, Bredefeld’s office released what is officially titled the Money Back Guarantee/Business Streamlining Act.
“The purpose of this act is to streamline the business/development approval process, making the process more transparent and user friendly, while increasing accountability at City Hall to provide efficient customer service,” the ordinance reads.
The plan sets forth 18 specific deadlines to meet, from 75 business days to approve a development or conditional use permit to construction plans approved within 60 days.
The planning department (officially known as Development and Resource Management or DARM) would assign a person to follow through on the application to ensure timelines are met.
If not, the applicant would receive a credit applicable to future development and business license fees. Additionally, the applicant could request a fee voucher that is transferable to another person, business or nonprofit group.
The plan does carve exemptions: If a delay is the fault of the applicant, or an outside agency (a water district or air board, for example) or even the council itself, the fee wouldn’t be returned. The plan also sets up a process for dispute resolution through the city’s hearing officer.
In addition, Bredefeld built in a voluntary customer satisfaction survey, with results to be released publicly, four times a year.
(Disclosure: GV Wire Publisher Darius Assemi, is president/CEO of Granville Homes. Granville regularly deals with the city’s planning department for its projects. Assemi participated in Bredefeld’s January announcement of his plan).

The fact that the GAC heard Bredefeld’s proposal is a story in and of itself. On the first version of the agenda released last week, the GAC did not list the Bredefeld plan.
On the agenda distributed at the meeting, the item did appear. But, because Bredefeld did not supply documentation to the GAC, they decided not to discuss it.
Bredefeld said he that backed off as not to upstage a scheduled presentation from City Councilman Luis Chavez regarding his business-friendly plan. The GAC unanimously supported Chavez’s proposed legislation to incentivize businesses opening in the Ventura/Kings Canyon corridor. 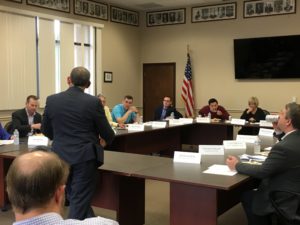 Also in attendance: Brand’s chief of staff, Tim Orman. He offered a rebuttal to Bredefeld’s money-back program —even though at that point there was nothing on the agenda to rebut.
Orman called Bredefeld’s idea dramatically premature and said that it would do more harm than good.
“If you gave money back, you are making the problem worse,” Orman told the GAC.
Orman also warned that if the city had to refund fees, members of the planning department could be laid off. Or even police officers.
“This is a soundbite in search of a problem,” Orman said.
Orman said that things are getting better. He noted that a new software system to help streamline permits is coming online April 23. Also, Brand’s Business Friendly Fresno 2.0! task force will hold its first meeting next month.
“Give us patience to do our work,” Orman said. 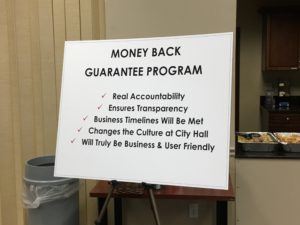 Orman took off after his presentation. A short while later, Chamber VP of Government Affairs Nathan Alonzo announced to the group that Bredefeld read Orman’s comments on social media (from GV Wire’s tweet), and would deliver his presentation after all.

“Fresno is known for not being user-friendly. We have a culture problem.” Fresno Councilman Garry Bredefeld
Making good on his word, Bredefeld entered with chart and stand in tow.
“Fresno is known for not being user-friendly,” Bredefeld said. “We have a culture problem.”
While wishing Business Friendly Fresno 2.0! well, Bredefeld opined, “It is time to act, not time to study anymore.”
Bredefeld also answered Orman’s prediction that his plan would take money away from the General Fund or jeopardize public safety. In his plan, if deadlines are not met by the city, developers would receive credits, he said. Those would be applied against the budget of the department at fault, whether it planning, public utilities or public works.
“Politicians come and go. This will change the culture,” Bredefeld said

As Bredefeld started his pitch, Brand arrived and sat next to Bredefeld at the presentation table.
Brand told the group that business friendliness is a complex issue that won’t be solved overnight. He said that it would be unfair to punish the planning or fire departments for failure to meet “arbitrary timelines.”
He also expressed concern that Bredefeld’s plan would violate the City Charter on the budget. And he said that disciplining employees could cause a union issue.
“We need to make Fresno better. (Business Friendly Fresno 2.0!) will be successful,” Brand promised.
Finally, Brand expressed some conciliation of working with Bredefeld’s plan: “Maybe in a modified effort, it might work.”
“It is what it is. We had a healthy dialogue. I expressed my point of view. The mayor expressed his. I don’t see this ordinance as opposition to what the mayor is doing. It works hand in hand,” Bredefeld told GV Wire after the meeting.

Bredefeld says he is undeterred by the GAC vote. While no vote is likely on March 22, Bredefeld expects members of the business community to attend and testify to their hardships dealing with the city.