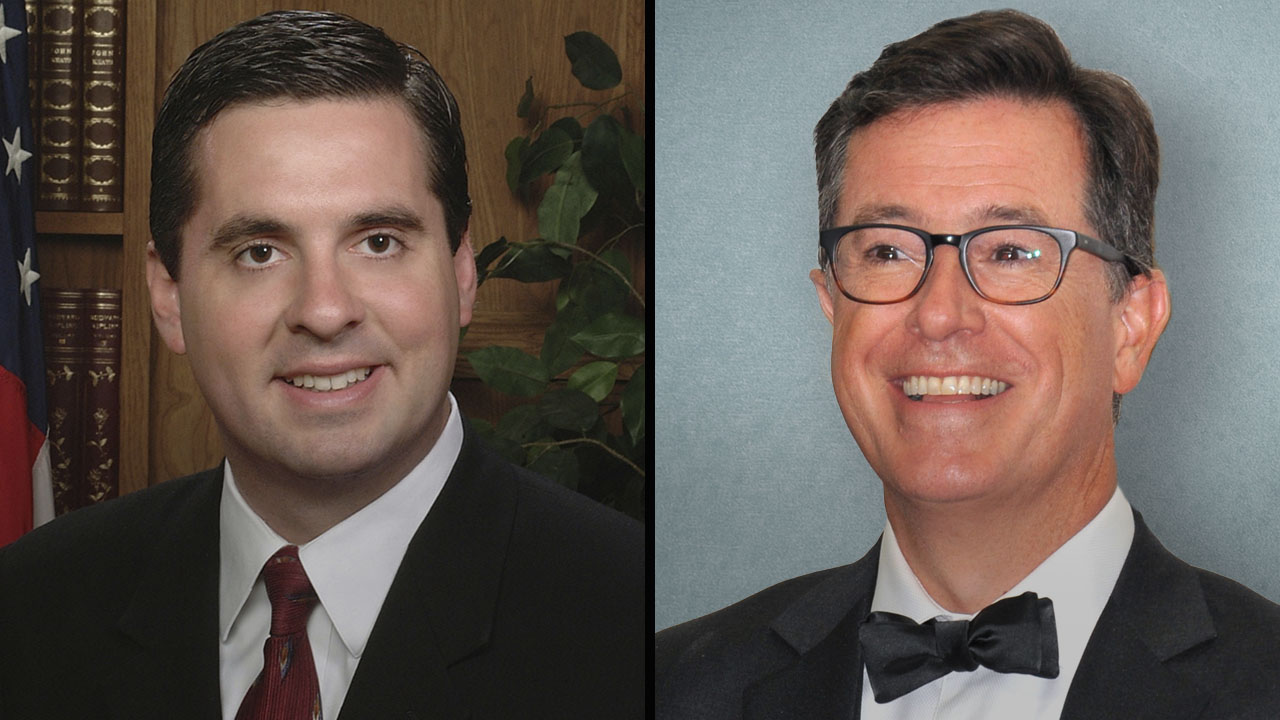 It hasn’t been on display lately and Stephen Colbert would never vouch for it, but Rep. Devin Nunes does have a sense of humor.
So I’ve made it my job to help my congressman laugh again.

On the March 2 edition of “The Late Show with Stephen Colbert,” the host skewered Nunes about his infamous Russia investigation memo.
Rep. Adam Schiff, the ranking Democrat on the House Intelligence Committee and Nunes’ arch-rival, played along. As did Sen. Jeff Flake, a Republican from Arizona, in a skit shot on Capitol Hill.

In one scene, the comedian asked Flake, “Do you have any guesses as to what it might say underneath?”

Colbert was referring to a redaction in his spoof memo about Nunes.

Replied Colbert: “Former dairy farmer? Really? Because he seems to be milking it right now.”

How did Nunes take it?
Not very well.
Instead of considering a rip job from Colbert a badge of honor, he turned up on Fox News. Forget loaded AR-15s aimed at schoolkids. In Nunes’ mind, the clear and present danger is a loaded punchline.
“This is the danger that we have in this country,” Nunes told Fox News’s Neil Cavuto. “The left controls not only the universities in this country, but they also control Hollywood in this country, and the mainstream media, so conservatives in this country are under attack … They attack people who are trying to get to the truth.”

It’s not hard to imagine this exact quote coming from the mouth of Colbert’s own tongue-in-cheek conservative persona from “The Colbert Report.” The only difference is, no one would mistake it for being anything other than extreme satire.

Colbert is a danger to no one. Unless, of course, he gets folks laughing so hard they fall off their couches and break a rib.

No One Immune from Colbert’s Darts

As for the mainstream media being controlled by leftists, Nunes should try telling that to The Sacramento Bee, which recently lost its sense of humor, too.
In case you missed it, Colbert jabbed the city of Sacramento in an interview with “Lady Bird” star Saoirse Ronan.
The film is based on director Greta Gerwig’s experiences growing up in California’s River City, and Sacramentans are justifiably proud of their city and the widely lauded hit movie.
But Colbert has a job to do. Part of his schtick is embarrassing his guests. No one goes on his show thinking he or she will exit unscathed. Nor does anyone in the social media spin cycle think that Colbert will spare them in his monologue.  Just ask alleged sexual harasser and assaulter Harvey Weinstein, the Hollywood mogul. Or Kendall Jenner, who starred in that ridiculous (and quickly pulled) Pepsi protest movement ad.
Thus Colbert told Ronan that he had been to Sacramento and he was “aware of how boring it is.”
Ronan then called Sacramento “a beautiful place,” opening the door for Colbert to shoot back “very beautiful, but there’s not a lot to do.”
What did The Bee do?
Publish a clickbait story under the headline “Stephen Colbert trashes Sacramento in interview with ‘Lady Bird’ star.”
Just like Nunes, those in charge at The Bee rose to the bait — either forgetting or not caring that the more publicity the better for Colbert. Their reaction was so over the top you would have thought some smart aleck editorial board had proclaimed Fresno, not Sacramento, as “America’s Farm-to-Fork Capital.”

The Best Way to React When Colbert Pushes Your Buttons?

I doubt that Nunes has seen the Colbert show where he destroys MSNBC’s Rachel Maddow. Her sin was promising a big reveal about President Donald Trump’s tax returns and delivering nothing. I mean Geraldo Rivera found more in Al Capone’s vault than Maddow found in the two pages she had of Trump’s 2005 tax return.
Even worse, said Colbert, she forced viewers to sit through “like, 20 minutes of explaining what taxes are and who Donald Trump is” before getting to the point: Trump paid his taxes in 2005.

Did Maddow get mad? Or tell her liberals-gone-crazy MSNBC audience that Colbert’s mind was now controlled by Rush Limbaugh? Or speculate that the Trump White House had received scandalous information from the Russians and was using it to blackmail Colbert? If Maddow had, she would have sounded exactly like Nunes did on Fox News.
Instead, she made herself part of the joke. Her Twitter response: Guilty, as charged.

OH MY GOD HOW DOES HE KNOW I HAD A PET CHICKEN. https://t.co/a05dW7LruR

I Need Help on This Assignment

Odds of Nunes listening to me are zero. Even so, you can’t deny he needs to laugh again.
If Nunes doesn’t, he risks free fallin’ (with apologies to Tom Petty) down the liberal-conspiracy rabbit hole all the way to … Moscow.
My recommendation: One of his fellow Republican congressmen from the Valley — or even Democrat Rep. Jim Costa, you know how he loves bipartisanship! — should introduce the Comprehensive Devin Nunes Sense of Humor Recovery and Sustainability Act of 2018.
Corporate donations gladly accepted to get this done. Don’t be shy, D.C. lobbyists, about pitching in with sage advice.
I want to see Devin Nunes laugh again.
Just like he used to when he visited my leftist-rag mainstream media office in his good ol’ carefree days of the past.