Bengals Return to AFC Championship With 27-10 Rout of Bills 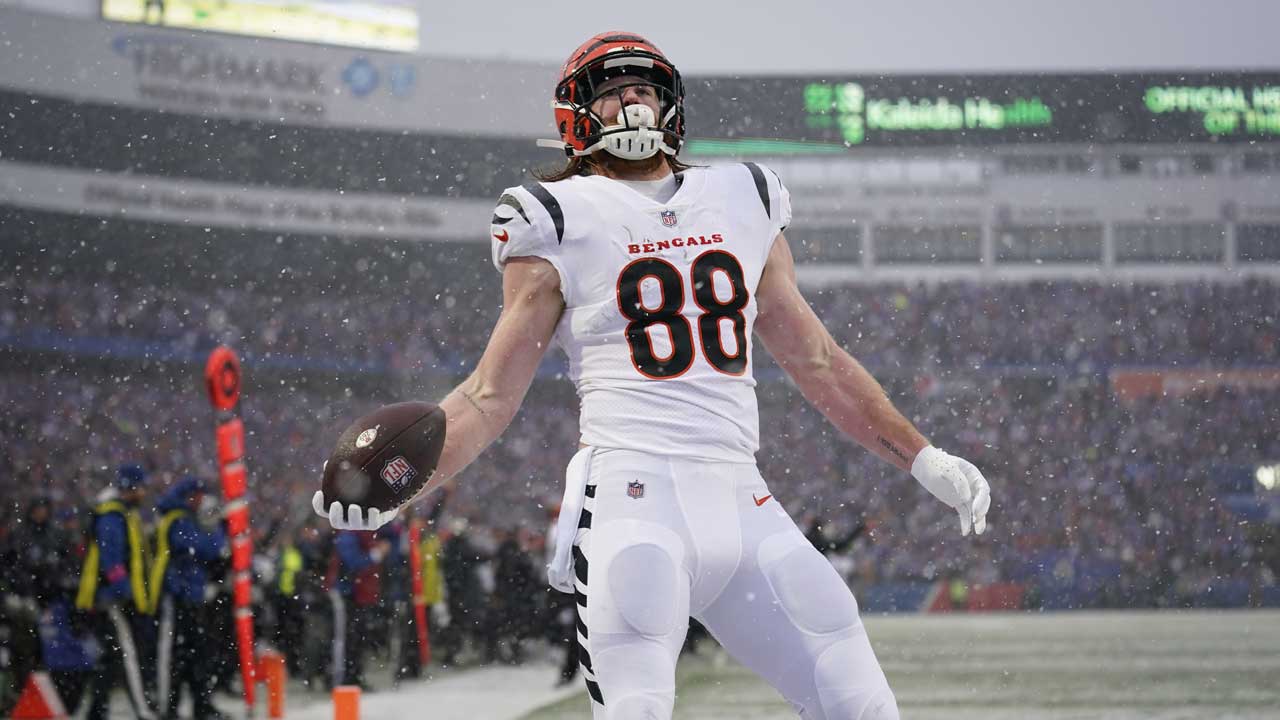 Joe Burrow and the Cincinnati Bengals threw a big wrench into the highly anticipated travel plans of the Buffalo Bills, their fans and perhaps even the NFL offices.

Burrow threw two touchdown passes and Cincinnati’s defense swarmed Josh Allen on a snow-slicked field in a 27-10 win Sunday to send the Bengals to the AFC championship game for the second straight year.

And it’ll be in Kansas City again — instead of in Atlanta, the neutral site where the game would’ve been played if Buffalo had beaten Cincinnati.

“Better send those refunds,” Burrow said, referring to the 50,000 or so tickets already sold for a game that will never be played.

“See y’all in Atlanta,” one Bengals player was heard yelling sarcastically while the team made its way to the locker room, where cornerback Eli Apple and a couple of teammates conducted interviews smoking cigars.

The Bengals entered the game already feeling disrespected when the NFL began selling tickets for a would-be game at Atlanta, that was dependent on the Bills and Chiefs winning this weekend.

The league decided on the first of its kind conference championship neutral site setting because the Bills (13-3) finished the season a half-game behind the Chiefs (14-3) after their game at Cincinnati was canceled on Jan. 2 when Bills safety Damar Hamlin went into cardiac arrest and had to be resuscitated on the field.

Hamlin’s inspirational presence while watching the game from an end-zone suite was not enough to spark the Bills.

Instead, it was “Joe Cool” showing poise while playing in a persistent snowfall.

Burrow completed his first nine passes for 105 yards as Cincinnati raced to a 14-0 lead after its first two possessions. Ja’Marr Chase opened the scoring with a 28-yard TD catch 3:20 into the game, followed by Burrow’s 15-yard TD throw to Hayden Hurst eight minutes later. Joe Mixon scored on a 1-yard run, and Evan McPherson made field goals from 20 and 28 yards in a game the Bengals never trailed.

“The bigger the moment gets, the calmer he gets,” Bengals coach Zac Taylor said of Burrow, who improved his playoff record to 5-1. “Our guys believe. They walk on the field ready to attack.”

Cincinnati advanced to consecutive AFC championship games for the first time in franchise history and will prepare for a rematch of last year’s title game. The Bengals defeated Patrick Mahomes and the Chiefs 27-24 to advance to last year’s Super Bowl, which they lost to the Los Angeles Rams.

Cincinnati has won the past three meetings against Kansas City, including a 27-24 victory last month. The Chiefs are making their fifth straight appearance in the AFC championship game following a 27-20 win over Jacksonville on Saturday.

The Bills’ playoff run ended in the divisional round for a second straight season, including a 42-36 overtime loss to Kansas City last year.

Bills receiver Stefon Diggs was so upset, he was spotted leaving the locker room with much of his gear on shortly after the game ended before being coaxed by a teammate to return.

“He’s a competitive guy. What makes him good is what you saw,” coach Sean McDermott said of Diggs. “It hurts. I wouldn’t want a guy that doesn’t hurt. We put it all on the line out there and tonight it wasn’t good enough.”

It was a dud of an outing for the Bills, who opened the season with Super Bowl aspirations, and eventually ran out of emotional and physical gas. Aside from the stunning sight of Hamlin’s collapse, the Bills had their schedule twice disrupted by severe winter storms.

“We were expecting their best punch and they came out and punched us,” said Allen, who finished 25 of 42 for 265 yards, and scored on a 1-yard plunge. “We just didn’t have it today.”

The Bengals mixed in their running attack to keep the Bills off balance in a first half during which Cincinnati outgained Buffalo in total yards by a margin of 274-135, and 412-325 overall. Mixon’s 105 yards rushing alone were 1 short of how many the Bengals combined in their past two games, both against Baltimore.

“Domination from start to finish,” Burrow added. “That’s what we expected. Job’s not finished.”

The Bengals held one of the NFL’s top offenses to season-low 10 points. And the unit got a chance to celebrate by making snow angels in the end zone after Cam Taylor-Britt intercepted Allen’s attempt at the goal line to essentially end the game with 62 seconds remaining.

Hamlin was whisked into the stadium in a security vehicle, and led directly into the Bills’ locker room about an hour before kickoff. He was later joined by his mother, Nina, and younger brother, Damir. He watched the game from a suite in one end zone and was pictured on the videoboard at the 2-minute warning in the first half, with Cincinnati facing second-and-goal at Buffalo’s 5.

Hamlin raised his arms in his suite to a roar of cheers, before making a heart sign with his hands. The Bills limited the Bengals to a field goal, and trailed 17-7 at the half.

“We’ll be back,” Hamlin tweeted a few hours after the game. “Don’t even trip.”

The Bengals extended their franchise-best streak to 10 straight wins. They haven’t lost since a 32-13 defeat at Cleveland on Halloween. The Bengals’ 30 first downs were a franchise postseason record.

They were the most allowed by the Bills since allowing 30 in last year’s playoff loss at Kansas City.

The Bills dropped to 13-2 when hosting an NFL playoff game. And they were 4-0 under McDermott.

US Proposes Once-a-Year COVID Shots for Most Americans