Update: The Madera County Office of Emergency Services issued a mandatory evacuation order Monday morning for residents of the Bass Lake RV Resort and Sierra Springs Mobile Home Park due to flooding in the area.

An evacuation shelter has been opened at the Oakhurst Community Center, 39800 Fresno Flats Road, for evacuated residents.

Meanwhile, Fresno County announced that Lost Lake Park day use and campgrounds have been closed due to heavy flooding, effective Monday.

The arrival of the latest in a series of atmospheric river storms in California is bringing heavy rain and gusty winds across the Valley, with more of the same forecast for Tuesday.

By the time the storm ends on Wednesday, the Fresno area could record as much as 2.5 inches of rain, said Jeff Barlow, a National Weather Service meteorologist in Hanford.

That means Fresno will be close to its annual average total of 10.99 inches as measured by the National Oceanic and Atmospheric Administration. NOAA’s weather calendar is October through September.

The Merced River in downtown Merced is forecast to reach record flooding levels, he said.

The NWS issued a flash flood warning for Bass Lake on Monday.

Rain also is raising river levels elsewhere in the Valley, but no flood warnings are being issued at this point for the San Joaquin, Kings, Tule, or Fresno Rivers, he said.

While drainage basins and river channels are filling, both have some capacity yet because of the drought, he said. But “we’re watching those rivers,” and people who live near them or creeks should be prepared for potential flooding,” Barlow said.

The coastal town of #Capitola in #California has suffered extensive damage due to flooding from this week’s #BombCyclone. Heed all weather warnings, and stay safe! https://t.co/3v4hmcqRiN

Belmont Avenue between H Street and Golden State Boulevard is closed due to a power outage and minor flooding, Fresno officials said early Monday afternoon. The city says it expects the closure to continue throughout the day.

Drivers are advised to use north Olive Avenue via Weber Avenue or Golden State Boulevard or find an alternate route. 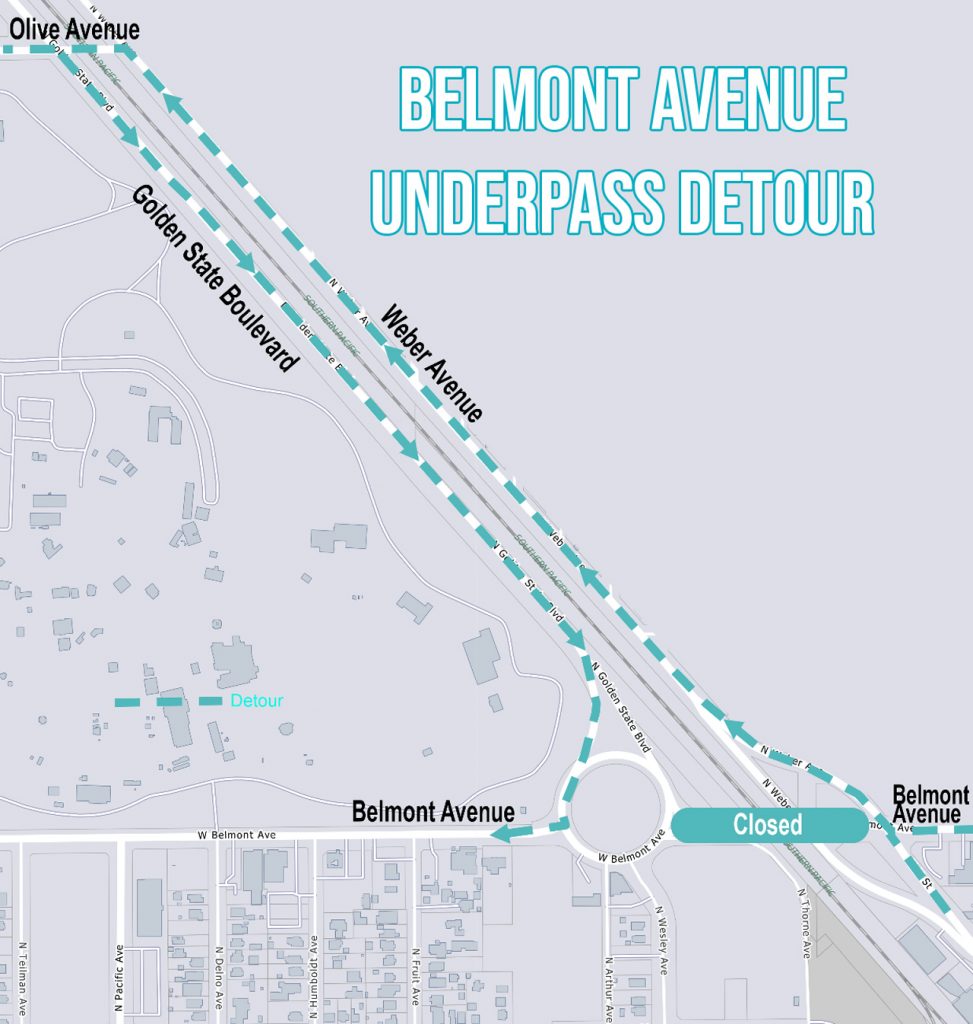 The California Highway Patrol is urging residents to limit travel through Wednesday whenever possible. Motorists need to be prepared for the potential for hydroplaning — when a buildup of water under tires causes the tires to lose their grip on the roadway — Barlow said.

“You could be driving into a heavy shower, maybe it’s kind of light and then it gets real heavy. So we’re just encouraging people to be careful if you’re out there driving,” he said.

Roadways in the Fresno area with poor drainage are subject to flooding, especially in the shoulder and right-hand lanes.

“We are seeing storm reports of downed trees, mudslides, localized flooding, and high winds. Much of that is heading our way still,” Boyles said in an email.

PG&E has opened a temporary transfer yard at the Clovis Rodeo Grounds, where mutual assistance crews from other states and Canada will stage prior to going out to restore power. 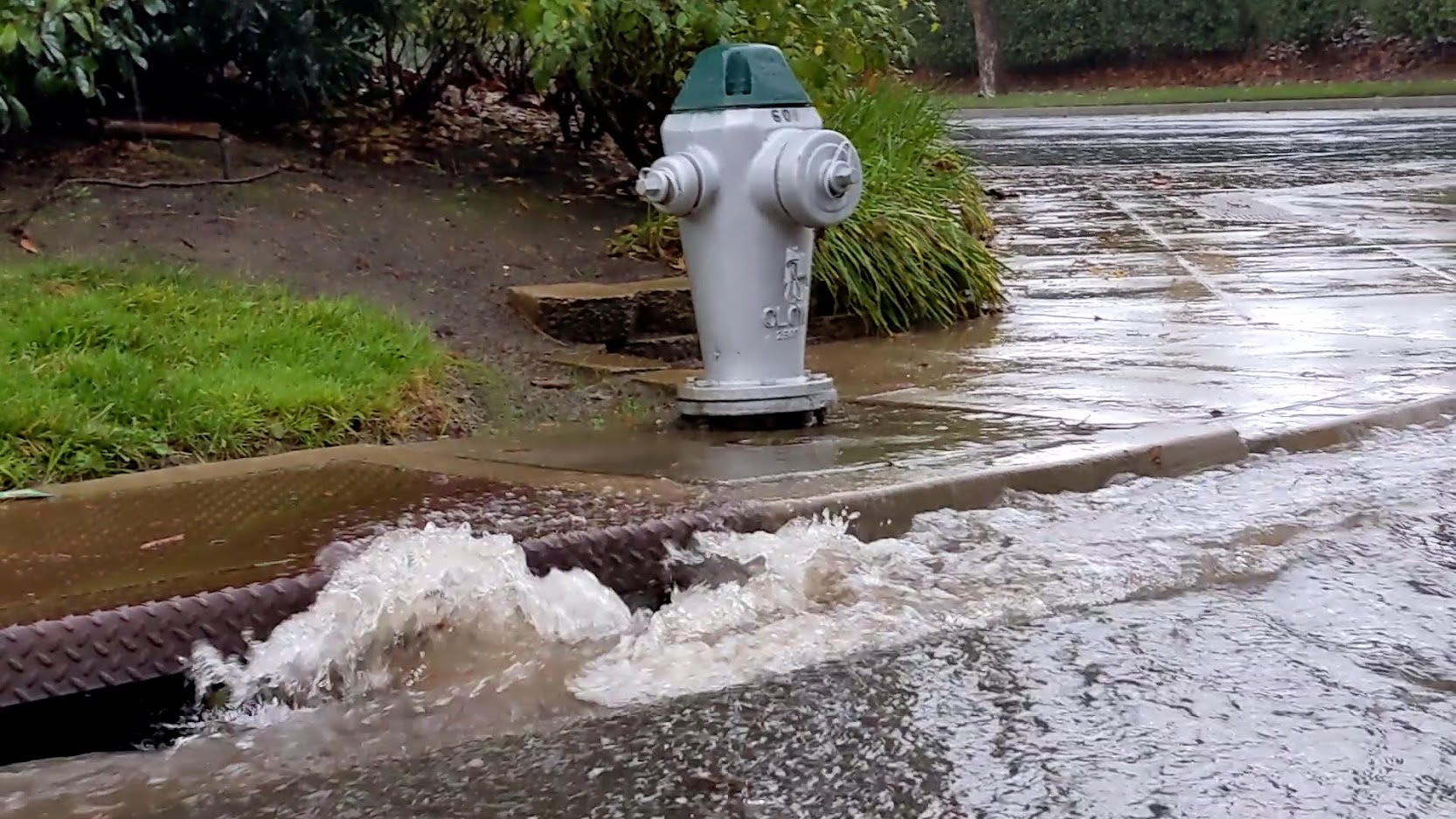 Water spills out of the gutter and well into the street in northeast Fresno, Monday, Jan.9, 2023. This latest storm could dump 2.5 inches of rain on the Fresno area. (GV Wire/Johnny Soto)

The city of Clovis advises motorists to avoid Ashlan Avenue between Thompson and Highland avenues because of storm-related damage. Traffic is being detoured away from the area.

The city has distributed more than 4,000 sandbags to residents. A self-service sandbag fill station is located at the Clovis Corporation Yard, 155 N. Sunnyside Ave. Sandbags are limited to 10 per household.

City crews are pumping water between areas where water retention is available, and such pumping operations are normal during storms. The city is working with the Fresno Metropolitan Flood Control District to coordinate efforts.

To report a problem such as flooding, fallen trees, or other storm-related issues please contact the Clovis Public Utilities Department at (559) 324-2600 or use the GoClovis app.

The severe storm pummeling the state is forecast to diminish overnight Monday but then will resume with high winds and heavy rains on Tuesday, Barlow said.

The forecast is for sustained windy conditions at 15 to 25 mph, with gusts as high as 45 mph through 4 p.m. Monday, he said.

TREE DOWN
Three cars were damaged after a tree fell over this morning. The residents have been working to get what they can out of the road. City workers just got here. @ABC30 pic.twitter.com/Jj5Zg2NKAT

Because the storm is being fueled by subtropical moisture, rain is pelting snow-laden hillsides, and the amount of water flowing downhill is increasing due to the snowmelt.

The pressure of the increased water also is causing hillsides, especially those damaged by wildfires, to slide onto nearby roadways.