Israel Swears in Netanyahu as PM of Hard-Line Government 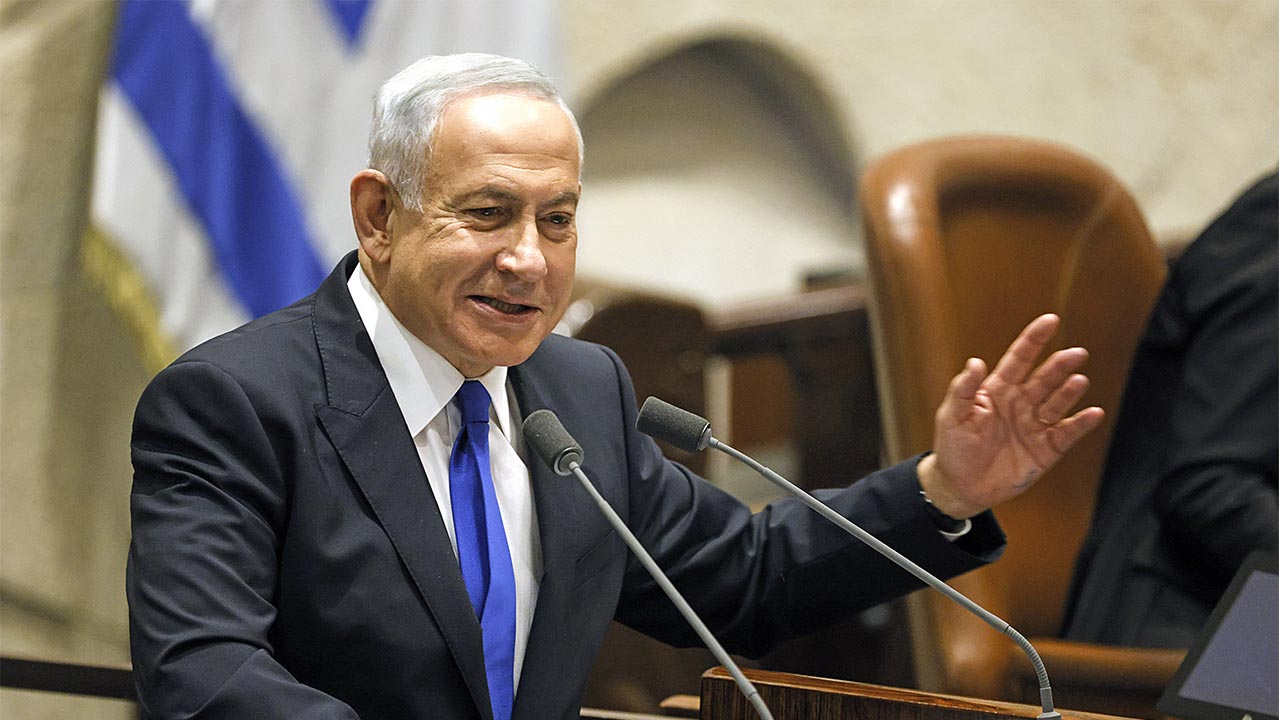 Benjamin Netanyahu was sworn into office Thursday, taking the helm of the most right-wing and religiously conservative government in Israel’s history and vowing to enact policies that could cause domestic and regional turmoil and alienate the country’s closest allies.

Netanyahu took the oath of office moments after parliament passed a vote of confidence in his new government. His return marks his sixth term in office, continuing his more than decade-long dominance over Israeli politics.

His new government has pledged to prioritize settlement expansion in the occupied West Bank, extend massive subsidies to his ultra-Orthodox allies and push for sweeping reform of the judicial system that could endanger the country’s democratic institutions. The plans have sparked an unprecedented uproar from across Israeli society, including the military, LGBTQ rights groups, the business community and others.

Netanyahu is the country’s longest serving prime minister, having held office from 2009 until 2021 and a stint in the 1990s. He was ousted from office last year after four deadlocked elections by a coalition of eight parties solely united in their opposition to his rule.

Despite his political comeback, he remains on trial for charges of fraud, breach of trust and accepting bribes in three corruption cases. He denies all charges against him, saying he is the victim of a witch hunt orchestrated by a hostile media, police and prosecutors.

The diverse yet fragile coalition that toppled Netanyahu collapsed in June, and Netanyahu and his ultranationalist and ultra-Orthodox allies secured a clear parliamentary majority in November’s election.

“I hear the constant cries of the opposition about the end of the country and democracy,” said Netanyahu after taking the podium in parliament ahead of the government’s formal swearing-in on Thursday afternoon. His speech was interrupted repeatedly by heckles and jeers from opposition leadership, who at times chanted “weak.”

“Opposition members: to lose in elections is not the end of democracy, this is the essence of democracy,” he said.

His allies are pushing for dramatic changes that could alienate large swaths of the Israeli public, deepen the conflict with the Palestinians and put Israel on a collision course with some of its closest supporters, including the United States and the Jewish American community.

Netanyahu’s government platform says that “the Jewish people have exclusive and indisputable rights” over the entirety of Israel and the Palestinian territories and promises to advance settlement construction in the occupied West Bank. That includes legalizing dozens of wildcat outposts and a commitment to annex the entire territory, a step that would draw heavy international opposition by destroying any remaining hopes for Palestinian statehood and add fuel to calls that Israel is an apartheid state if millions of Palestinians are not granted citizenship.

Netanyahu’s previous administrations have been strong proponents of Israel’s West Bank settlement enterprise, and that is only expected to be kicked into overdrive under the new government.

Israel captured the West Bank in 1967 along with the Gaza Strip and east Jerusalem — territories the Palestinians seek for a future state. Israel has constructed dozens of Jewish settlements that are home to around 500,000 Israelis who live alongside around 2.5 million Palestinians.

Most of the international community considers Israel’s West Bank settlements illegal and an obstacle to peace with the Palestinians. The United States already has warned the incoming government against taking steps that could further undermine hopes for an independent Palestinian state.

The White House National Security Council said on Thursday that it does not “support policies that endanger the viability of a two-state solution or contradict our mutual interests and values.”

“We support policies that advance Israel’s security and regional integration, support a two-state solution, and lead to equal measures of security, prosperity, and freedom for Israelis and Palestinians,” it added.

Israel’s new government has also raised concerns about the rollback of minority and LGBTQ rights. Outside parliament, several thousand demonstrators waved Israeli and rainbow Pride flags. “We don’t want fascists in the Knesset!” they chanted.

Earlier this week, two members of the Religious Zionism party said they would advance an amendment to the country’s anti-discrimination law that would allow businesses and doctors to discriminate against the LGBTQ community on the basis of religious faith.

Those remarks, along with the ruling coalition’s broadly anti-LGBTQ stance, have raised fears that the new administration would jeoopardize their limited rights. Netanyahu has tried to allay those concerns by pledging no harm to LGBTQ rights.

Netanyahu loyalist Amir Ohana, who is openly gay, was voted in as speaker of parliament as his partner and their two children watched from the audience. Onstage, he turned to them and promised the new government would respect everyone. “This Knesset, under the leadership of this speaker, won’t hurt them or any child or any other family, period,” he said.

Yair Lapid, the outgoing prime minister who will now reassume the title of opposition leader, told parliament that he was handing the new government “a country in excellent condition, with a strong economy, with improved defensive abilities and strong deterrence, with one of the best international standings ever.”

“Try not to destroy it. We’ll be back soon,” Lapid said.