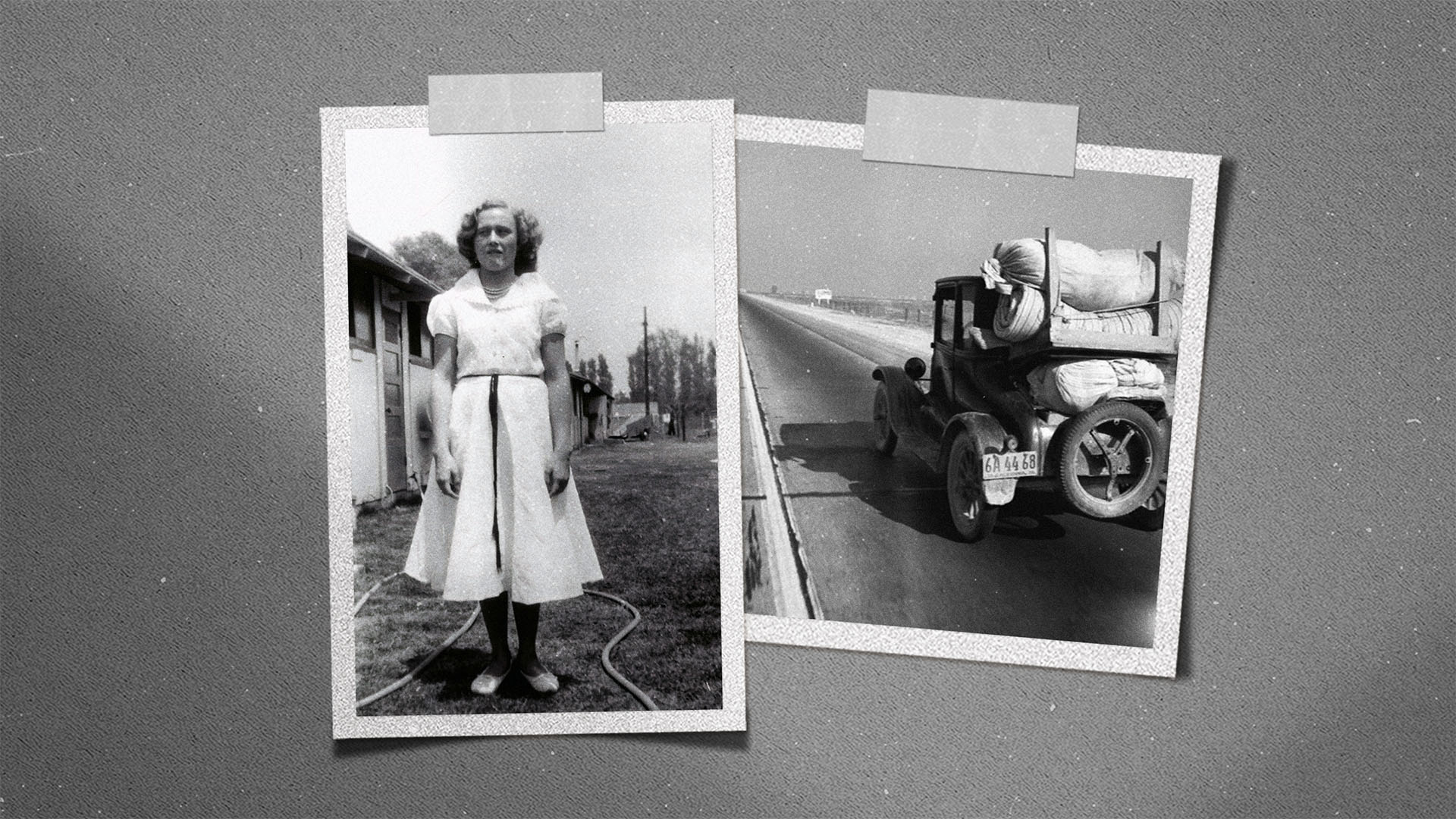 “They had qualities of humor and courage and inventiveness and energy that appealed to me. I thought that if we had a national character and a national genius, these people, who were beginning to be called Okies, were it.” – John Steinbeck, “America and Americans”

My Great-Aunt Fern was the last member of our big California family to be born in Oklahoma. But she never much cared for author John Steinbeck’s portrayals of her fellow Okies, in The Grapes of Wrath and other books, as the noble epitome of American working-class struggle.

We Okies were just people, she would say — no better than all the other people who migrated to California, and who sent their kids to the public schools where she taught for more than 40 years.

She was right about that, with one big caveat. Migrant families sometimes have one person who is more than ordinary, and thus changes the family’s trajectory. On my mother’s side of the family, that person was Fern. Before her, we were a family of poorly-educated migrant cotton-pickers in eastern Oklahoma. Today, we’re mostly middle-class Californians, some of us with fancy university degrees.

Whenever I saw her — usually at Thanksgiving or other family gatherings in Redlands—I’d try to thank her personally. But I can’t do that anymore.

Fern Humphrey Dewees, a force of faith and family who taught two generations of kindergarteners how to love school, died Oct. 28, after a long struggle with Alzheimer’s disease. She was 84.

Fern was the fifth of five children born to William and Linnie Humphrey in Okemah, Oklahoma, best known as Woody Guthrie’s hometown. Her mother had wanted to call her Lothera, an uncommon name, but when her father, known as Bull, went to register the birth, he couldn’t spell it. So, he named her Fern.

Her birth was good news at an awful time, amidst the deepening Great Depression, coming war, and dust storms that plagued migrant farmworkers like the Humphreys. Bull left first, along with Fern’s big brother Dale; other siblings (including my grandmother) would follow. Fern and Linnie left for California in 1944, when Fern was 6. They roamed a bit, living in Kern County briefly before finding work in the fruit packing houses of East Highland, next to San Bernardino and Redlands.

At first, Fern did not feel welcomed. Years later, when I asked why she had become a teacher, she talked about an elementary school teacher who had told her she was a dumb Okie. Fern said she never wanted another student to feel like that.

This slight would fuel her. So would a profound feeling of faith that came not from her unchurched family but from within herself. She dreamed of becoming a missionary.

She was maybe 7, and living on the “Green Row” of packing house company housing in East Highland, when she convinced a neighbor to take her to services at the Assembly of God. Soon Fern was carrying a Bible, volunteering as a Salvation Army bellringer, and witnessing to the homeless on the San Bernardino streets. She eventually joined Temple Baptist Church (now Pathway), and convince her mother and others to come along with her, it would be her congregation for the rest of her life. 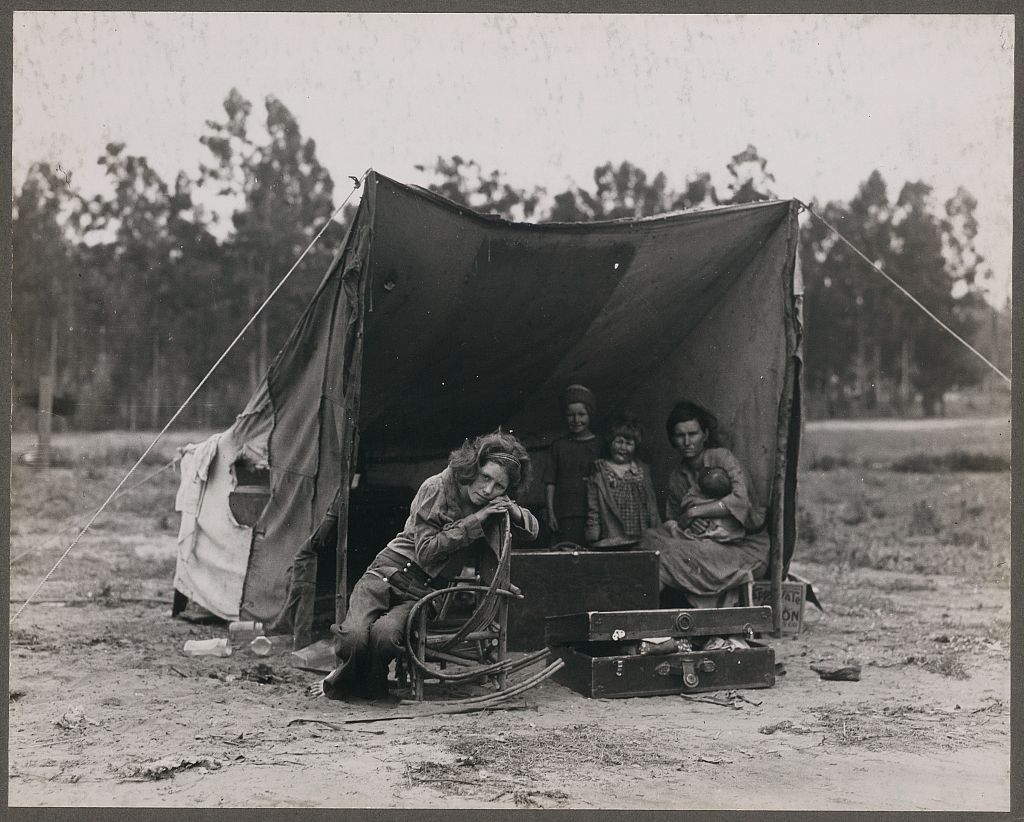 Life was hard for the migrating Oklahomans. (Dorothea Lange/Library of Congress)

First in Her Family to Earn a College Degree

Fern graduated from Redlands High in 1956 and attended Valley College in San Bernardino, where she was homecoming princess. She met Donald Thomas Dewees Jr., a Pennsylvania kid going to school on the GI bill, on the Valley College student council. They married in 1960.

She so enjoyed performing in college theatrical productions that she talked of becoming an actress at the Pasadena Playhouse. But then she took an aptitude test that confirmed her earlier instinct: She should be a teacher.

Bull Humphrey hadn’t wanted his youngest daughter to go to university. But her brother Dale, a truck driver, was hauling sand to build the campus now known as Cal State L.A. when he suggested that she get her bachelor’s there. Fern became the first member of our family to get a college degree.

She so enjoyed performing in college theatrical productions that she talked of becoming an actress at the Pasadena Playhouse. But then she took an aptitude test that confirmed her earlier instinct: She should be a teacher.

After a few years living and teaching in the Covina area, Fern and Don — and their two young boys, Donnie and Michael — moved back to Redlands. In 1967, they bought a three-year-old house in an unincorporated county neighborhood, on Redlands’ border.

It would be their home for the next 51 years.

As Much a Part of Redlands Landscape as the Orange Groves

Over the next half-century, Fern became as familiar a part of the Redlands landscape as the orange groves. She was the teacher whose classes parents tried to get their children into. She was the wife of one of the high school football and baseball coaches. She was a faithful church choir member who organized the annual, animal-filled Easter Pageants at the Redlands Bowl. She volunteered in dozens of community organizations, especially those supporting education, women, and faith.

And she was the linchpin of an enormous family extending across California deserts and valleys, convincing my cousins from Modesto to the Mojave to make the long drive home to Redlands for the holidays.

She applied her missionary zeal in the classroom. She kept her students constantly moving around and embraced project-based learning, well before such approaches were conventional wisdom. She was especially adept at supporting struggling kids; she even tutored particularly hard cases at home.

“Mom knew what it was like to be an outcast,” says her son Michael. “Her whole life, she was very protective of outcast kids.”

She inspired more than a few of her students to work in the classroom themselves. Today at Mariposa Elementary, the teacher in K1, Fern’s old classroom, is Mara Comadena, who was a student of Fern’s in the 1970s. When they became colleagues. Comadena was struck by “the way Fern talked to the students—she was very matter-of-fact, very to the point, firm and fair. She wanted them to learn, but being a kindergarten teacher is not just about learning. I recall her saying often, ‘You want kids to love coming to school.’”

Fern loved coming to school, too. There were no limits to her ambitions—after she wrote a new elementary school curriculum on weather, she cold-called the L.A. TV meteorologist “Dr. George” Fischbeck and convinced him to return to Redlands and teach a lesson.  She taped construction paper on the bottom of students’ desks and then had them lie down beneath and paint facing upward     —to show them how Michelangelo painted the ceiling of the Sistine Chapel.

Fern retired in 2004, after 41 years of teaching. In 2006, she became an actual missionary, traveling to South Africa with members of her church to work with children, many of them HIV-positive.

Throughout her life, Fern, who never quite lost her Okie twang, was skilled at getting along with people. If she had any enemies, they were probably the cardiologists of friends and relatives for whom she cooked delicious meals from old family recipes.

Her signature dish was a dessert — Aunt Fern’s chocolate pie, made with four eggs and two sticks of butter.

The pie wasn’t healthy. But it tasted good enough to make you believe in God almost as much as Fern did.