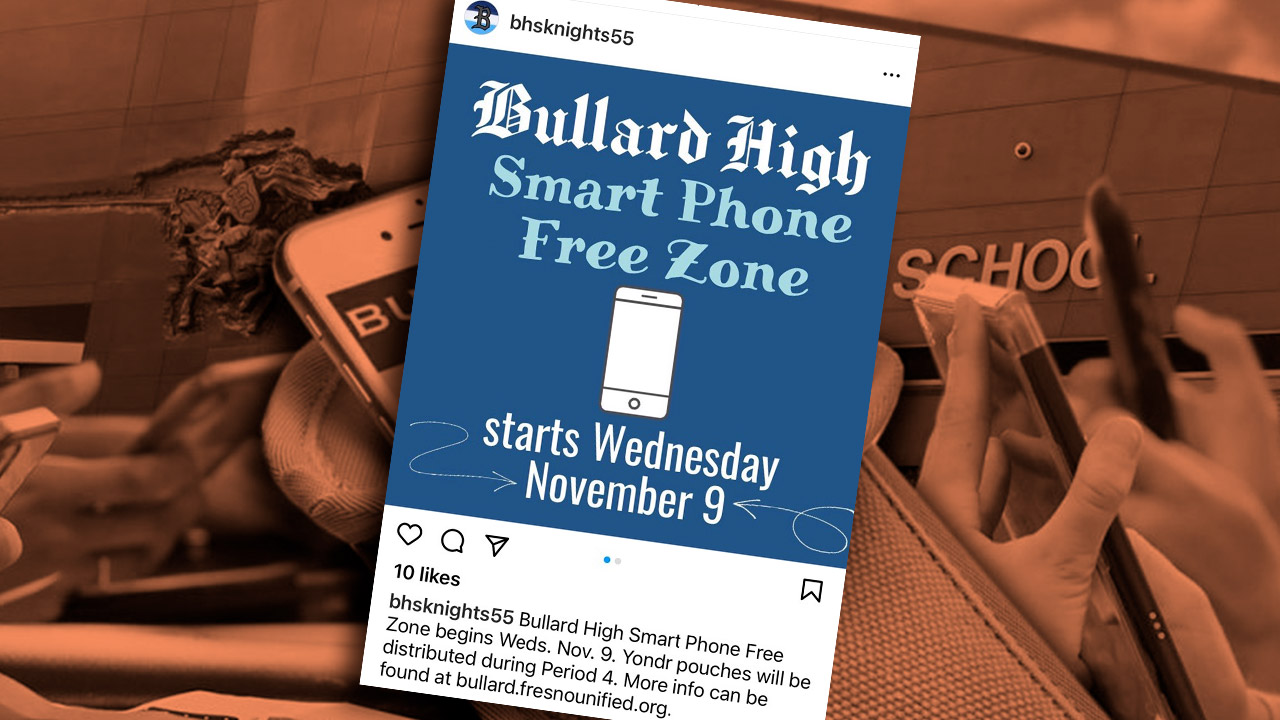 Bullard High School’s new policy restricting student access to their smart phones during the school day will start Wednesday, the school announced in messages to families, social media posts, and on the school’s website.

The controversial ban, which school officials say is designed to improve student academic performance by reducing distractions but critics say will limit the ability of students to record incidents at the northwest Fresno school, could prompt a student walkout on Wednesday, parent Marcelino Valdez Jr. told GV Wire.

Valdez said one of his two children who attends Bullard asked his permission to participate in the walkout, which he said he granted because of students’ rights to civic protest.

According to a memo on the school’s website, each student will be issued a magnetically locking pouch and will be expected to have it in their possession during the school day. Students can unlock their Yondr pouches at the end of the school day at unlocking stations that will be at school exits.

Even students who don’t have a smart phone will be issued a pouch and will have to hold onto it during the school day, the memo says:

“Students who don’t have a cell phone or smartphone, must fill out a form stating so. Student will still be issued a pouch and will be expected to always keep the pouch in their possession. A laminated card will be provided to the student to show staff that they will not have a smartphone in their pouch.”

Students will be responsible for the pouches, just as they are other school issued items such as textbooks and laptops, and they will have to pay $20 for lost or damaged pouches, the memo says.

The memo spells out the steps that will be taken by the school the first, second, and third times that students are caught with cellphones outside the pouches.

Those consequences could include banning students from school activities, such as the upcoming Winter Formal, Valdez said.

The roll-out of the cellphone ban, which was originally scheduled for September, was delayed until November after students and parents protested and the school held a town hall meeting.

Valdez said he’s doubtful that locking up cellphones will lead to a significant improvement in test scores, and he continues to question why the school is trying to limit access. He said that while he tells his children to put away their phones during class, on occasion he may need to reach out to his children or they to him during the school day. Requiring students to ask permission to use their phones can lead to situations where he is unable to provide advice to them in a timely fashion, he said.

In addition, the school has seen a number of incidents since the start of the school year, including a hoax report of a mass school shooting that prompted a large response by armed Fresno police officers and that prompted many students and parents to reach out to each other.

A school emergency drill last year showed how ill-prepared the school would be in the event of an actual event, Valdez said.

“For me, there’s too many concerns, too many things that have happened at Bullard for me to safely support such an extreme measure of taking away my kids’ cell phone,” he said. “Bullard has not earned that right. They need to work to get to that point, but they’re not there yet. So to prematurely roll out some sort of plan like this, to me, is irresponsible on their part.”

Valdez predicts that the policy will lead to less education as teachers are required to enforce the cellphone use policy over the objections of students.