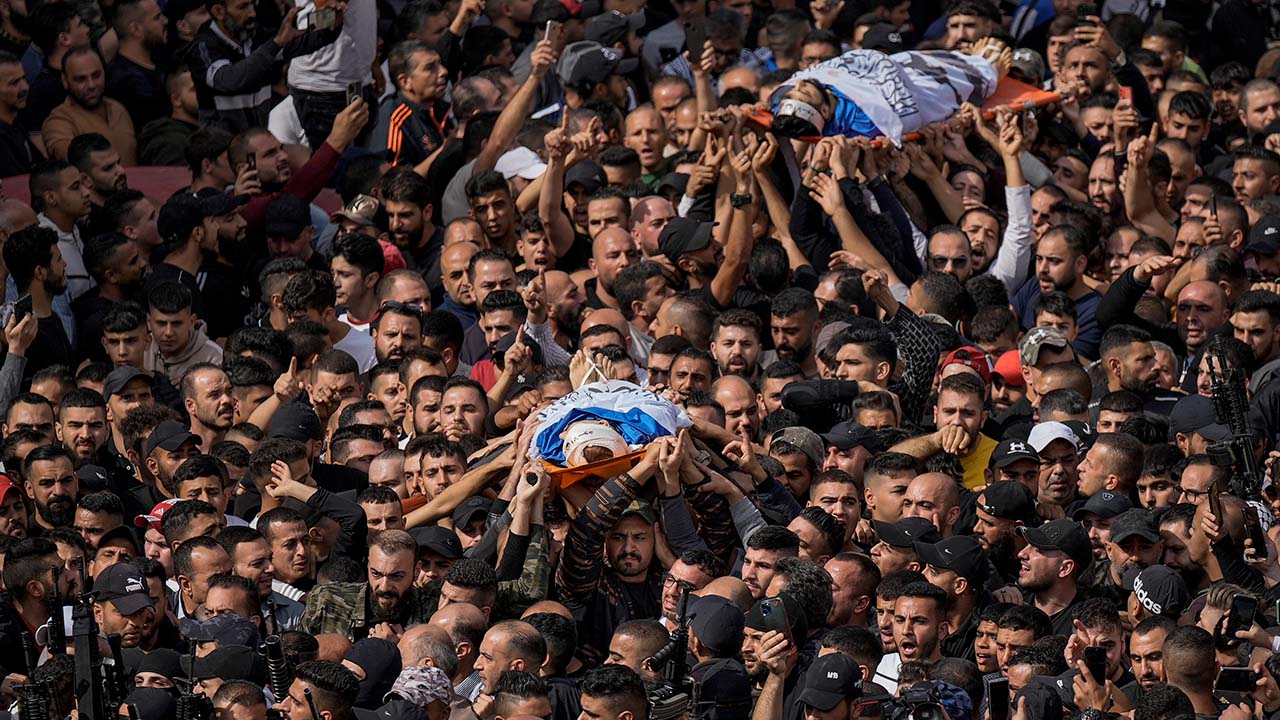 Mourners carry the bodies of Palestinians who were among five killed in an overnight Israeli raid, during their funeral Tuesday in the occupied West Bank city of Nablus. (AP Photo/Majdi Mohammed)
Share with friends

NABLUS, West Bank — Israeli forces raided a stronghold of an armed group in the occupied West Bank’s second-largest city, blowing up a bomb lab and engaging in a firefight, the military said Tuesday. Five Palestinians were killed and 20 were wounded, according to the Palestinian Health Ministry.

The overnight raid in the old city, or kasbah, of Nablus, was one of the deadliest in the West Bank in 2022 and comes at a time of escalating tensions.

The target of the raid was a group of Palestinian gunmen calling themselves the Lions’ Den. The group was responsible for the recent fatal shooting of an Israeli soldier and several attempted attacks, the army said.

The five men killed in the raid were in their 20s and 30s, the Health Ministry said. Several of the wounded were in serious condition, the ministry said.

Israel’s caretaker prime minister, Yair Lapid, confirmed that Wadie Houh, a leader of the Lion’s Den group, was killed in a shootout with Israeli troops overnight. In remarks at a conference, he said the operation was “an accurate and deadly strike at the heart of terror infrastructure trying to carry out attacks.”

Palestinians in the West Bank and Gaza Strip staged a general strike in protest of Tuesday’s killings. Stores remained shuttered throughout the day in Nablus, Ramallah, Gaza City, and other Palestinian cities.

Elsewhere in the West Bank, the army said troops fired at a suspect who threw an explosive at them during an arrest raid near the village of Nebi Saleh. The Palestinian Health Ministry reported the death of 19-year-old Qusai al-Tamimi.

Later on Tuesday, dozens of Palestinians gathered near the perimeter fence separating the Gaza Strip and Israel to protest the Israeli military raid in Nablus. The protesters waved Palestinian flags and burned dozens of tires, sending columns of black smoke into the air. The protest ended at sunset and there were no reports of injuries.

The location of the protest in east Gaza City was one of five that saw weekly protests in 2018 and 2019 in which dozens of Palestinians were killed by Israeli snipers. Gaza’s Hamas rulers launched those protests to demand an easing of the blockade. The protests wound to a halt with unofficial understandings reached between the two sides via regional mediators.

Ongoing Israeli arrest raids in the West Bank pose a serious challenge to the Palestinian self-rule government, which administers just over one-third of the territory.

Palestinian President Mahmoud Abbas relies on security cooperation with Israel, particularly against his Islamic militant rivals, to remain in power. At the same time, this cooperation is deeply unpopular among Palestinians who chafe against Israel’s open-ended occupation, now in its 56th year.

Younger Palestinians are particularly disillusioned. Small bands of gunmen have formed in some areas, first in the Jenin refugee camp, a stronghold of militants, and now in Nablus. These groups challenge the Palestinian Authority and carry out attacks against Israeli targets.

In Tuesday’s raid, Israeli forces blew up a bomb lab in an apartment in Nablus, the military said. The statement said a number of militants were targeted and noted that Palestinians were reporting casualties. From the wording of the statement it was not immediately clear if some of those killed and wounded were hit in an initial ambush rather than a subsequent firefight.

Abbas’ spokesman, Nabil Abu Rdeneh, issued a statement in which he described the ongoing Israeli raids as a war crime.

More than 125 Palestinians have been killed in Israeli-Palestinian fighting in the West Bank and east Jerusalem this year. The fighting has surged since a series of Palestinian attacks killed 19 people in Israel in the spring. The Israeli army says most of the Palestinians killed have been militants. But stone-throwing youths protesting the incursions and others not involved in confrontations have also been killed.

Israel captured the West Bank in the 1967 Mideast war and has built more than 130 settlements there, many of which resemble small towns, with apartment blocks, shopping malls, and industrial zones. The Palestinians want the West Bank to form the main part of their future state. Most countries view the settlements as a violation of international law.

Related Topics:IsraelPalestinianWest Bank
Up Next