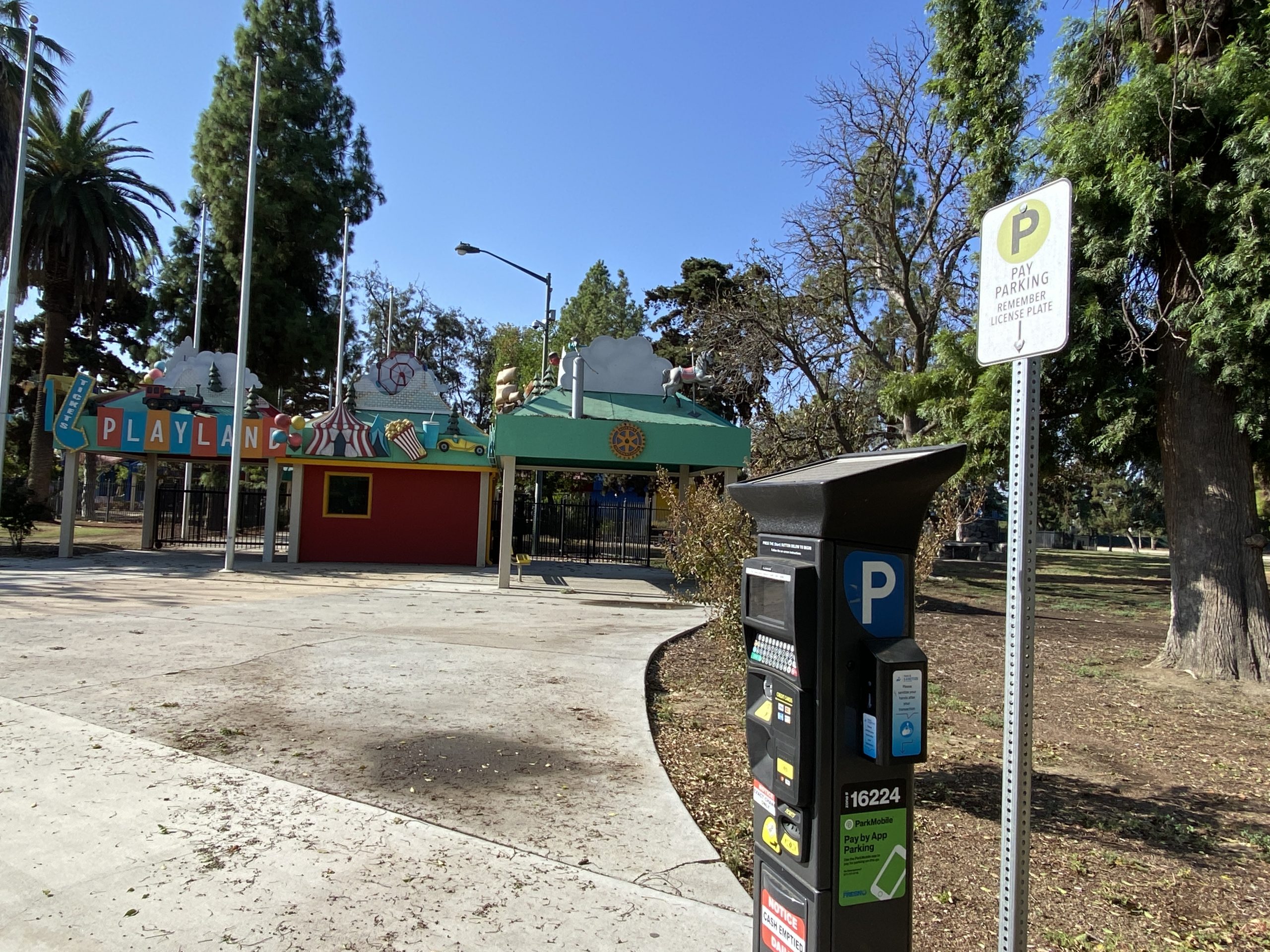 Despite a vote to not charge for parking at regional parks where Storyland/Playland is located, the fee remains. (GV Wire/David Taub)
Share with friends

Visitors to places like Storyland/Playland, the Fresno Chaffee Zoo, and Woodward Park will continue paying a $5 entry fee for vehicles.

More actually, since the kiosks only accept credit cards which charge an additional fee.

Councilman Miguel Arias wanted to eliminate those fees, calling it a “double tax” since city residents paid extra because of Measure P.

Even though the City Council approved the fee removal in a preliminary vote during the budget process, free parking never came to be.

It never made it to the final budget vote.

Arias told GV Wire that it would be unfair to charge when improvements are not there.

Parking kiosks were installed at the parks in 2021. They replaced staffed tollbooths at park entryways.

“What the administration brought to our attention was that the contract that the city had signed two years prior will require us to pay off all the hard equipment from vendor if we were to go away from the vendor,” Arias said.

In lieu of eliminating the parking fee, some of that money would be put into park programs, Arias said.

The city says a change in fees is still in play.

“As part of the fee analysis PARCS (parks department) is working on, we are looking at the ability to lower parking and other fees for city of Fresno residents that could be offset with Measure P revenue,” Mayor Jerry Dyer spokeswoman Sontaya Rose said.

Arias is proposing an alternate idea, agreeing that a parking fee levels the playing field for in-city residents and visitors.

“The regional parks (fee) provide us a way to charge … out of city residents for the cost of providing the regional amenities — they have to pay for parking. I think we have to come forward with a city of Fresno discount because they are already paying for Measure P,” Arias said.

During the annual budget process, the mayor presents the spending plan and the City Council votes to add or subtract items.

City councilmembers make those changes through budget motions that happen during various portions of the hearings. Through 93 motions, the budget was $60 million out of balance. The City Council, by law, must pass a balanced budget.

Ultimately, 92 of those motions were approved 7-0 in one June 23 vote.

The requirement for a balanced budget led to negotiations between a council subcommittee — Arias, Tyler Maxwell and Nelson Esparza — and members of the mayor’s staff.  Those talks slashed much of the requested spending — including eliminating park entry fees — before the final 7-0 vote by the City Council on June 30.

A Dyer spokeswoman said the city would “have to do a study to determine the nexus for the reduce fee.”

Before the vote, Esparza announced that the final budget vote would supersede the prior budget motions. But, it was not discussed what items — including the waiver of parking fees — did not make the cut.