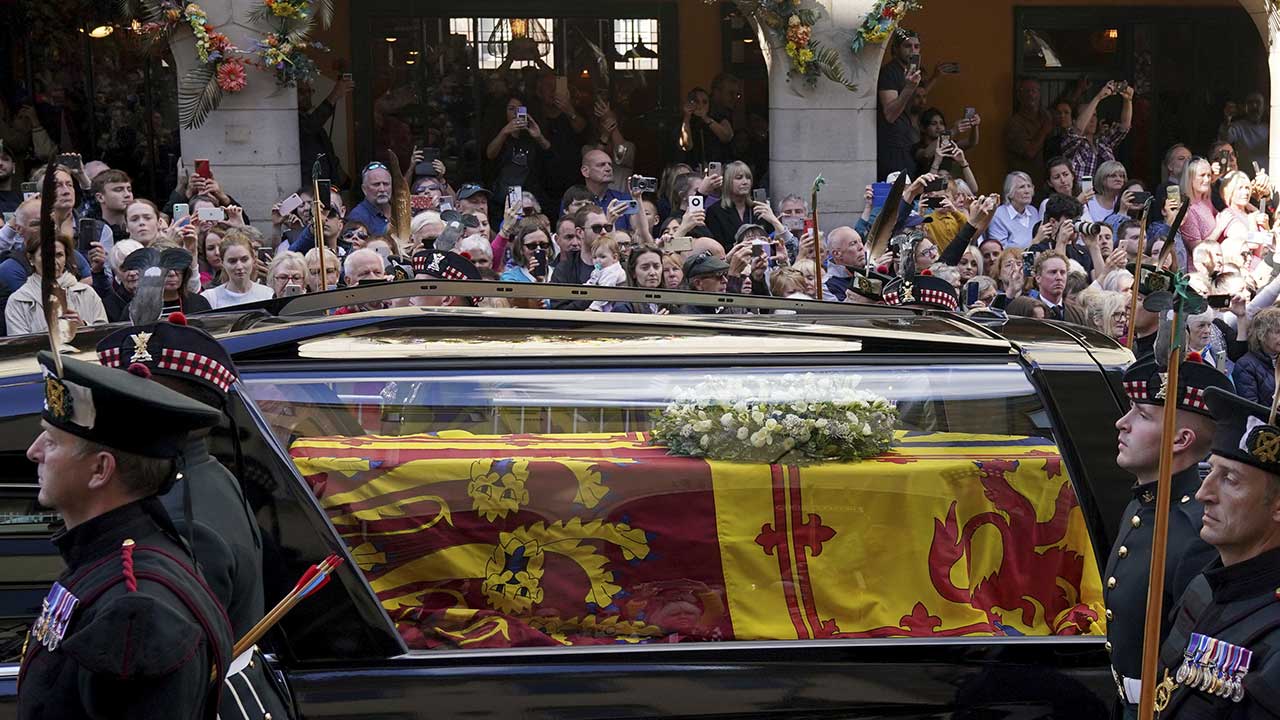 LONDON — Queen Elizabeth II has been likened to the invisible glue holding the United Kingdom together. Some think the reign of King Charles III will see those bonds come unstuck, giving new momentum to Scotland’s push for independence.

But the fact the queen died last week at her beloved Highland retreat, Balmoral Castle, has made Scotland the focus of commemorations watched around the globe in the first days after her death. That has served as a reminder of the monarchy’s deep ties to Scotland — and could provide a boost for the union.

Scottish historian Tom Devine said because by “extraordinary serendipity” the queen died in Scotland, “it was possible for the world to see the relationship between the queen and this country.”

“It was a fitting end to a life of service and a life of concern for the four nations — not simply one nation — of the U.K.,” he said.

In a touching display of respect, thousands of people on Sunday lined the 175-mile route from Balmoral to Edinburgh as the queen’s coffin was driven in a slow procession to the Scottish capital. On Monday, the coffin was carried along Edinburgh’s medieval Royal Mile to St. Giles’ Cathedral, where thousands more are expected to pay their respects over the next day.

The queen had deep ties to Scotland. Besides spending her summer months at Balmoral, her mother, the late Queen Mother, was Scottish and as a child the queen grew up playing on her grandparents’ estate of Glamis Castle in central Scotland.

So far there have been only tiny protests by anti-monarchist demonstrators. One woman was arrested in Edinburgh on Sunday for breaching the peace after brandishing a profane sign calling for the abolition of the monarchy.

King Charles III has moved quickly to stress that he will be a monarch for the whole of the U.K., undertaking a national tour during his first days on the throne. He was in Scotland on Monday accompanying his mother’s coffin, and he plans to visit Northern Ireland and Wales later in the week, attending memorial services in Belfast and Cardiff.

Scotland, Wales, and Northern Ireland are all part of the U.K. but have distinct histories — and complex ties with England, which dominates the U.K. in both population and politics.

Some Welsh nationalists have objected to Prince William being recently given the title of Prince of Wales — a title first given to the heir to the throne after the English conquest of Wales in the 14th century. 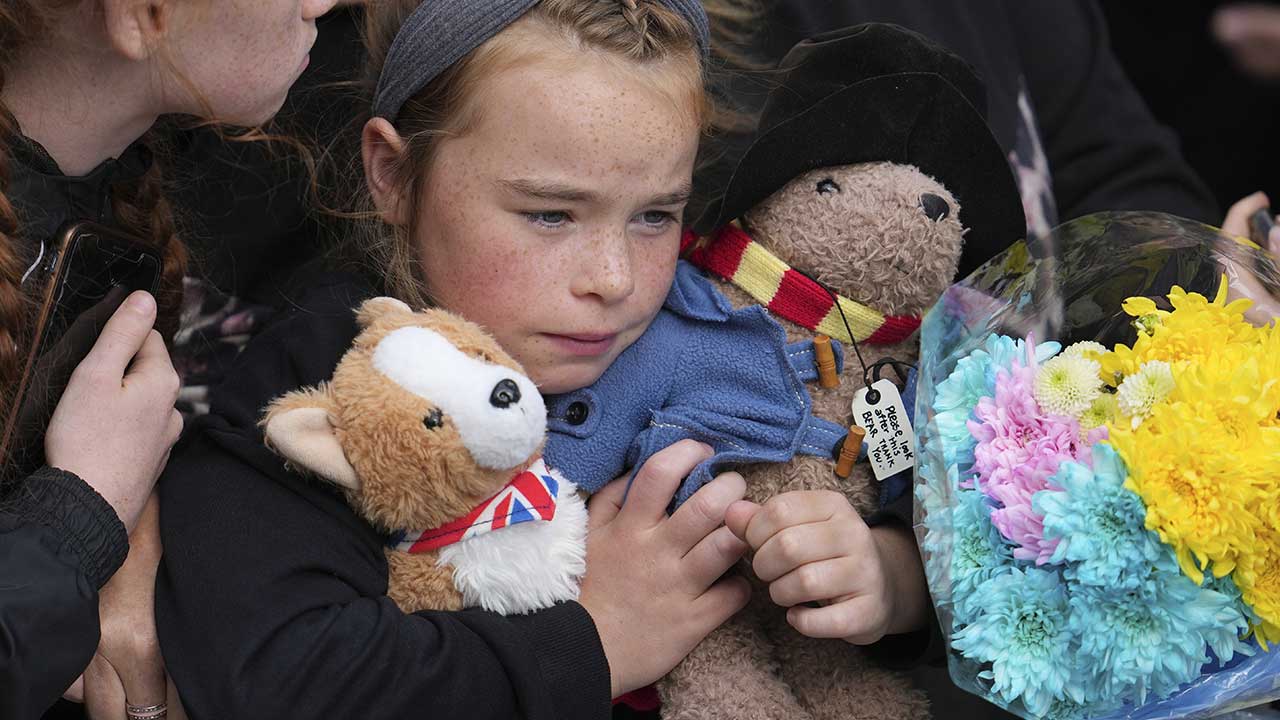 A young girl holds a Paddington bear and a Corgi dog stuffed toys while waiting to watch the Procession of Queen Elizabeth’s coffin from the Palace of Holyroodhouse to St Giles Cathedral on the Royal Mile in Edinburgh, Scotland, Monday, Sept. 12, 2022. At the Cathedral there will be a Service to celebrate the life of the Queen and her connection to Scotland. (AP/Jon Super, Pool)

The status of the monarchy has always been fraught in Northern Ireland, where there are two main communities: unionists who consider themselves British and nationalists who see themselves as Irish. That split fueled decades of violence known as “The Troubles,” and remains a deep divide. But in a sign of how far Northern Ireland has come on the road to peace, representatives of the Irish Republican Army-linked party Sinn Fein are attending commemorative events for the queen in Belfast.

Sinn Fein vice president Michelle O’Neill praised “the significant contribution Queen Elizabeth made to the advancement of peace and reconciliation between the different traditions on our island, and between Ireland and Britain during the years of the peace process.”

Scotland and England have been governed under the same monarch since 1603, and were formally unified in 1707. But Scotland has distinct educational and legal systems and, since 1999, its own parliament.

Relations now between the Conservative U.K. government in London and the pro-independence Scottish administration in Edinburgh are tense.

Former Prime Minister Boris Johnson, who left office last week, was unpopular in Scotland, where a majority opposed his pet project: Brexit. Johnson led the U.K. out of the European Union after a 2016 referendum in which the country as a whole backed leaving — but Scotland voted to stay in the bloc.

Devine said Johnson’s government had displayed “a reduction in respect for Scotland as a historic nation.”

“That attitude of disrespect considerably annoyed the Scottish electorate over the last few years,” he said. “But there is a still a very strong sense here that the monarchy — especially in the person of the queen — maintains that respect.”

In 2014, Scotland held a referendum on whether to remain part of the U.K. Voters rejected independence by 55% to 45% in what was billed as a once-in-a-generation choice. But the Scottish National Party government in Edinburgh is pushing for a new independence referendum, arguing that Brexit has radically changed the political and economic landscape.

Scotland’s First Minister Nicola Sturgeon has pledged to hold such a vote in October 2023. But new Prime Minister Liz Truss, like Johnson, says her government will not agree, and without its approval, a referendum would not be binding.

Amid the political deadlock, Sturgeon has appealed to the courts for the power to call a referendum on her own. The U.K. Supreme Court is to start hearing the case next month.

As monarch, Charles is required to remain politically neutral. His mother caused a stir in 2014 when she remarked that Scots should “think very carefully” before voting — a remark widely seen as opposing independence.

Even after that comment, the queen remained widely respected by people on both sides of Scotland’s independence debate. Sturgeon, the pro-independence first minister, praised Elizabeth on Monday as “the Queen of Scots” and “the great constant — the anchor of our nation.”

Pauline Maclaran, an expert on royal culture at Royal Holloway University of London, said “it will remain to be seen if Charles can command the same loyalty” as his mother.

“There will be a honeymoon period for Charles, I think, where everybody — out of respect, but also their own feelings — will lay off the usual demands for independence,” she said.

But Maclaran felt that period would not last.

“I think they (demands for Scottish independence) will come back. And I think the whole question will be how much can Charles build his bonds with them? What bonds does he have? That will then be one of his tests, that’s for sure,” she said.

Ukraine Reclaims More Territory, Running Out of Space for POWs