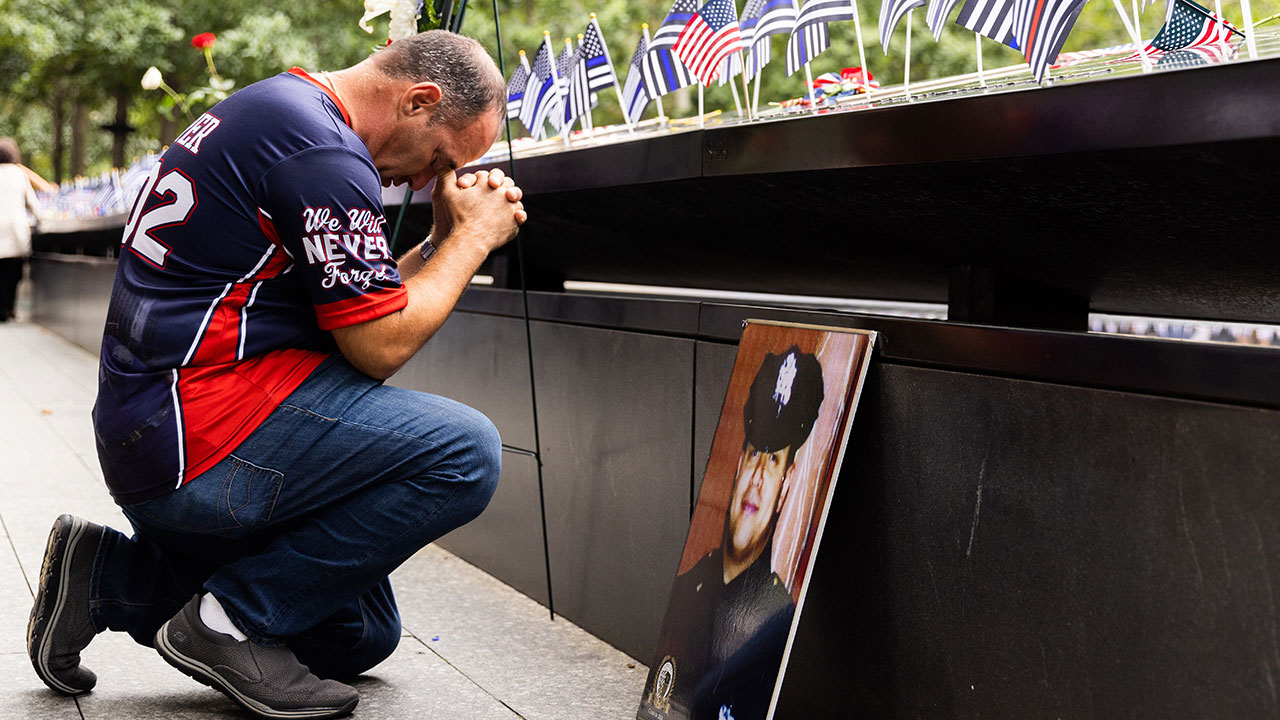 A man prays during a ceremony to commemorate the 21st anniversary of the Sept. 11 attacks, Sunday, Sept. 11, 2022, at the National September 11 Memorial & Museum in New York. (AP//Julia Nikhinson)
Share with friends

NEW YORK — Americans remembered 9/11 on Sunday with tear-choked tributes and pleas to “never forget,” 21 years after the deadliest terror attack on U.S. soil.

The loss still felt immediate to Bonita Mentis, who wore a necklace with a photo of her slain sister, Shevonne Mentis.

“It’s been 21 years, but it’s not 21 years for us. It seems like just yesterday,” she said before reading victims’ names at the World Trade Center to a crowd that included Vice President Kamala Harris and husband Doug Emhoff.

At the Pentagon, which also was targeted on 9/11, President Joe Biden vowed that the U.S. would continue working to root out terrorist plots and called on Americans to stand up for “the very democracy that guarantees the right to freedom that those terrorists on 9/11 sought to bury in the burning fire, smoke and ash.” First lady Jill Biden spoke at the third attack site, a field near Shanksville, Pennsylvania.

On Sept. 11, 2001, conspirators from the al-Qaida Muslim militant group seized control of jets to use them as passenger-filled missiles, hitting the trade center’s twin towers and the Pentagon. The fourth plane was headed for Washington but crashed near Shanksville after crew members and passengers tried to storm the cockpit.

Pierre Roldan, who lost his cousin Carlos Lillo, a paramedic, said “we had some form of justice” when a U.S. raid killed Osama bin Laden in 2011.

“Now that al-Zawahri is gone, at least we’re continuing to get that justice,” Roldan said. 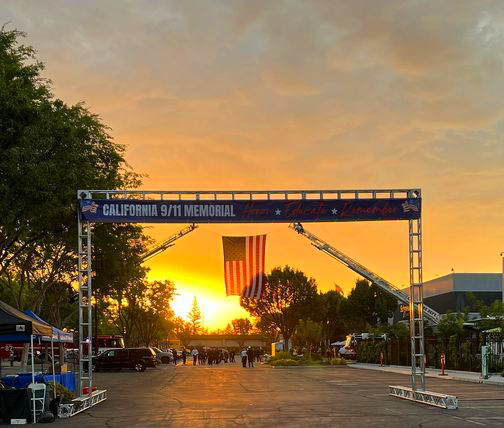 A large crowd paid their respects and shared their vow to “never forget” at the California 9-11 Memorial in Clovis on Sunday.

The ceremony included the playing of the audio dispatch from the first plane to hit the twin towers, the ringing of the “end of call” bell, and the laying of wreaths to recognize New York first-responders who lost their lives in service that day.

About 20 different law enforcement and military agencies attended the event.

The final words of United passenger Todd Beamer — “let’s roll” — became a national catchphrase. Beamer, a former Fresno State student, was one of several passengers who attempted to regain control of the jet from the highjackers.

The self-proclaimed mastermind of the attacks, Khalid Shaikh Mohammed, still awaits a long-postponed military tribunal. An attorney for one of Mohammed’s co-defendants this week confirmed ongoing negotiations toward a potential agreement to avoid a trial and impose lesser but still lengthy sentences.

The Sept. 11 attacks stirred — for a time — a sense of national pride and unity for many, while also subjecting Muslim Americans to years of suspicion and bigotry and engendering debate over the balance between safety and civil liberties. In ways both subtle and plain, the aftermath of 9/11 ripples through American politics and public life to this day.

But like some other victims’ relatives, Jay Saloman fears that Americans’ consciousness of 9/11 is receding.

“It was a terrorist attack against our country that day. And theoretically, everybody should remember it and, you know, take precautions and watch out,” said Saloman, who lost his brother, Wayne Saloman.

By tradition, no political figures speak at the ground zero ceremony. The observance centers, instead, on relatives reading aloud the names of the dead.

Like a growing number of readers, Brooke Walsh-DiMarzio wasn’t born yet when her relative died. But she took the podium to honor her grandmother, Barbara Walsh.

“I’m here today to represent generation 9/12, those who never experienced 9/11 but still suffer the aftermath of it,” Walsh-DiMarzio said. “We will never, ever forget.”

Nikita Shah wore a T-shirt that bore the de facto epigraph of the annual commemoration — “never forget” — and the name of her father, Jayesh Shah. She was 10 when he was killed.

The family later moved to Houston but often returns to New York for the anniversary to be “around people who kind of experienced the same type of grief and the same feelings after 9/11,” said Shah. 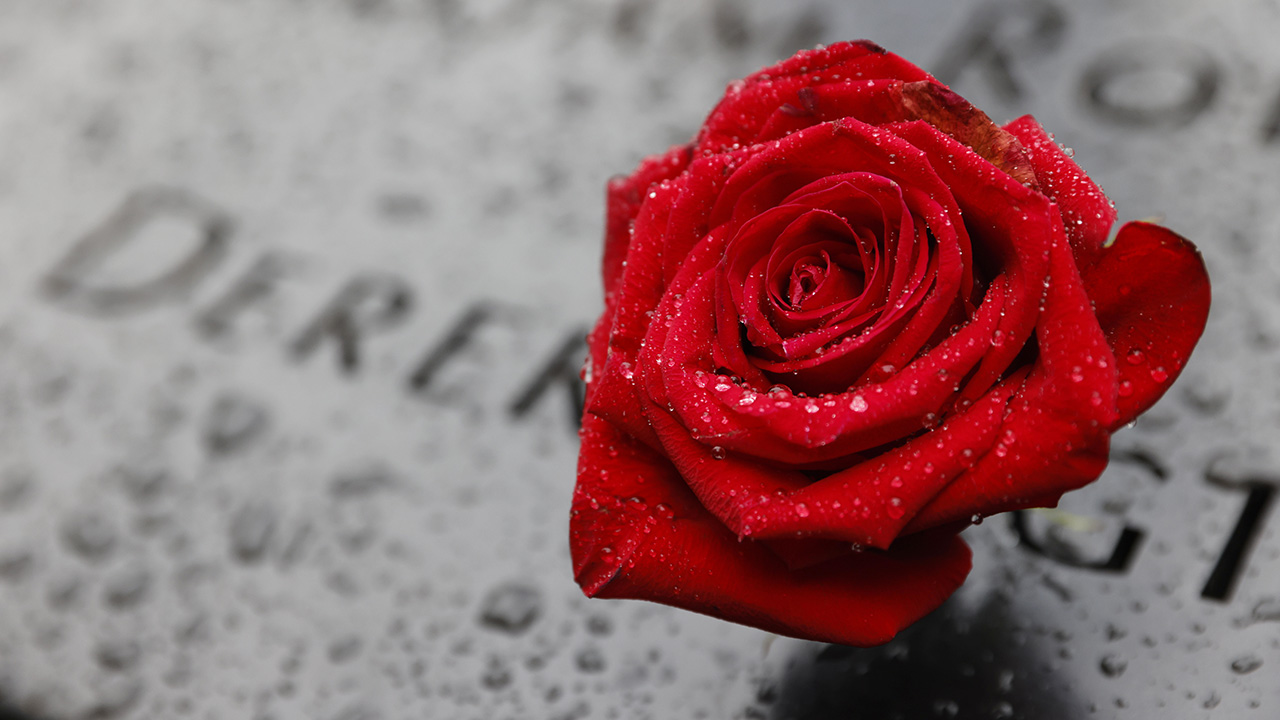 A rose at the reflecting pool during the commemoration ceremony on the 21st anniversary of the September 11, 2001 terror attacks on Sunday, Sept. 11, 2022, in New York. (AP /Stefan Jeremiah)

Readers often add personal remarks that form an alloy of American sentiments about Sept. 11 — grief, anger, toughness, appreciation for first responders and the military, appeals to patriotism, hopes for peace, occasional political barbs, and a poignant accounting of the graduations, weddings, births and daily lives that victims have missed. A few readers note recent events, this year ranging from the still ongoing coronavirus pandemic to Russia’s war in Ukraine.

Some relatives also lament that a nation which came together after the attacks has since splintered apart. Federal law enforcement and intelligence agencies, which were reshaped to focus on international terrorism after 9/11, now see the threat of domestic violent extremism as equally urgent.

Communities around the country marked the day with candlelight vigils, interfaith services, and other commemorations, and some Americans joined in volunteer projects. Others observed the anniversary with their own reflections.

More than 70 of Sekou Siby’s co-workers perished at Windows on the World, the restaurant atop the trade center’s north tower. He had the day off because another cook asked him to switch shifts.

“Every 9/11 is a reminder of what I lost that I can never recover,” says Siby, now president of ROC United, a restaurant workers’ advocacy group. He said ahead of the anniversary that the attacks made him wary of becoming attached to people when “you have no control over what’s going to happen to them next.”

Ginny Barnett volunteered at the Shanksville site after the attacks and struggled for years to come to terms with the tragedy. She gradually found hope by volunteering for the memorial there now.

“I have seen firsthand the evil that man can do, but I have also seen the good that man can do,” Barnett said Sunday. “With God’s help, we can focus on and foster good, rather than let hate and anger consume us.”