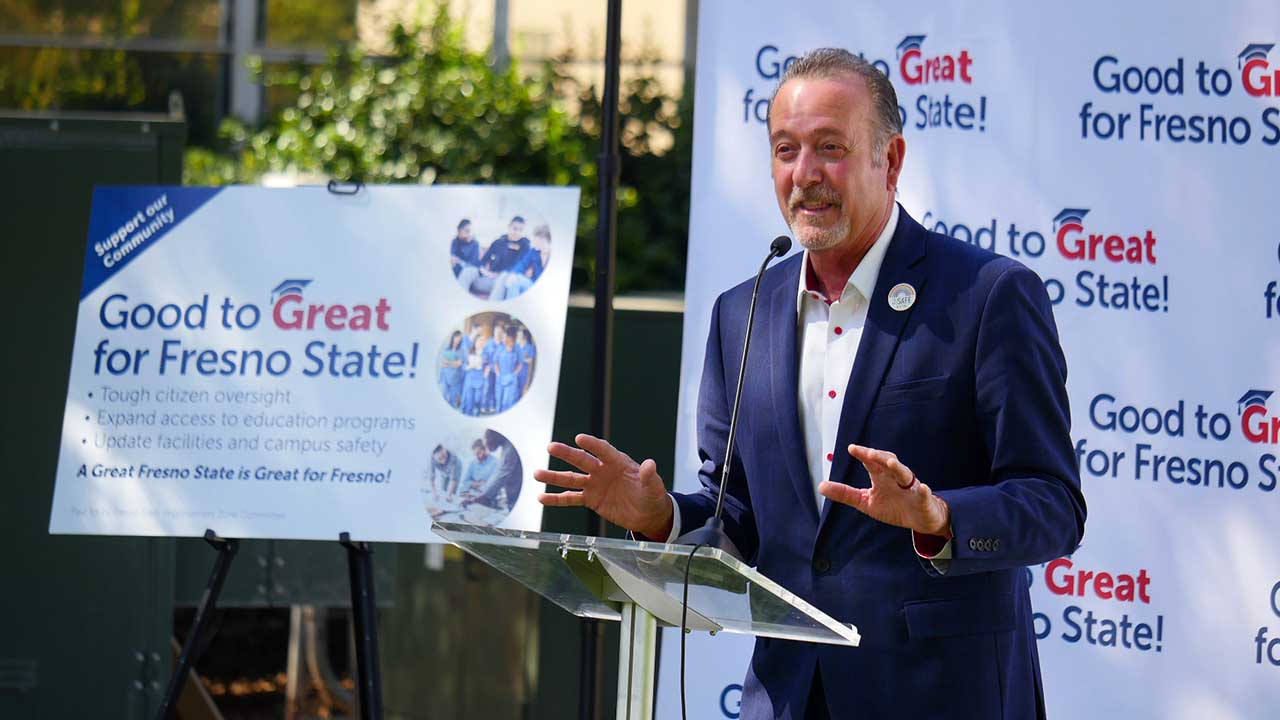 Fresno County Superintendent of Schools Jim Yovino was one of the Fresno State alums speaking in support of Measure E, the proposed sales tax to benefit Fresno State, at a news conference Tuesday at Fresno State. (GV Wire/Jahz Tello)
Share with friends

The campaign for a countywide sales tax hike to benefit Fresno State officially kicked off Tuesday morning with supporters saying that the future of Fresno County and the Valley depends on the university’s ability to educate tomorrow’s leaders and workforce.

Three Fresno State alums — Jim Yovino, the Fresno County superintendent of schools, Marc Johnson, the former superintendent of Sanger Unified School District, and Dora Westerlund, CEO of the Fresno Area Hispanic Foundation — talked about the importance of their Fresno State education to them personally as well as the school’s role in educating tomorrow’s nurses, engineers, and ag industry leaders.

No Fresno State officials spoke or appeared at the news conference. The university has not publicly taken a position on the proposed sales tax.

The measure’s chief backer is local developer Richard Spencer. Campaign finance reports for the Fresno State Improvement Zone Committee show that Richard F. Spencer and Affiliates has contributed $366,654.60 so far, including $110,000 on Monday.

If Measure E passes, backers estimate it would raise $36 million yearly, or $720 million over 20 years. The revenue would be used to expand access to Fresno State’s nursing, agriculture, criminology, and engineering/STEM programs; repair and upgrade academic and other facilities, including men’s and women’s athletic facilities; and provide scholarships for local low-income students.

Requires a Simple Majority to Pass

Because it is a citizens’ initiative, not proposed by local government, the proposed sales tax would only need a simple majority of yes votes in November’s election to pass.

“But our need in this region is extremely high as well. And so, we’re in a situation where now the voters have the ability to decide, the ability to choose,” he said. “And my question would be, are our children worth that investment? My answer is yes.”

But the investment in Fresno State also would benefit children from other counties whose parents would not be paying the additional sales tax unless they visit Fresno County.

The university’s enrollments in the spring of 2022 included students from as far north as Shasta County and as far south as San Diego County.

In addition to spending money on facilities improvements, Measure E revenues would also be used for scholarship assistance for low-income students.

‘This Is Our University’

Eighty percent of Fresno State’s graduates “stay here, work here, live here, contribute here, become a part of our Valley,” Johnson said. “The other issue that we grappled with is, how broad do you go to seek support for this? And we felt it was incumbent upon us, since we see the lion’s share of the benefit, we simply say, it’s time. This is our university.”

Johnson said his daughter, also a Fresno State alum, questioned whether the state of California and not Fresno County voters should be responsible for providing money for building upgrades and scholarships.

“And my answer was yes. And many others have asked the same question,” he said. “But let’s deal with reality, whether it’s in the K-12 system, the community college system, and especially at the university level, the state’s contribution towards maintenance of facilities and expansion of facilities has always been less than adequate.”

But whereas school districts and community college systems can ask voters to approve bond measures and pay higher property taxes in exchange for facility improvements, public universities in California don’t have that same option, Johnson said.

Measure E will be competing for voter approval on November’s ballot with the controversial renewal of Measure C and a new sales tax in the city of Fresno to benefit veterans, Measure V.

“I won’t speak about those other initiatives. I will simply say I believe this one is critically important that we invest in because it will impact the economy of this region,” Johnson said. “Fresno State is the engine that drives our economy. It has been and will continue to be. And investing here will support an improved economy in this region and allow us to address other needs as they surface.”

Local political consultant Tim Orman, who is spearheading the campaign, said after the news conference that a five-member citizens oversight committee that would be established if Measure E passes would be responsible for determining how the money is spent, not Fresno State or the California State University system.

“It’s crucial that, once this passes, that we have the Board of Supervisors select the right people to fill those five positions, that have the wherewithal and ability to make those kind of decisions, and work with Fresno State to find out what their needs are, and do it in an open and public fashion, to figure out what projects and what priorities go when,” he said.