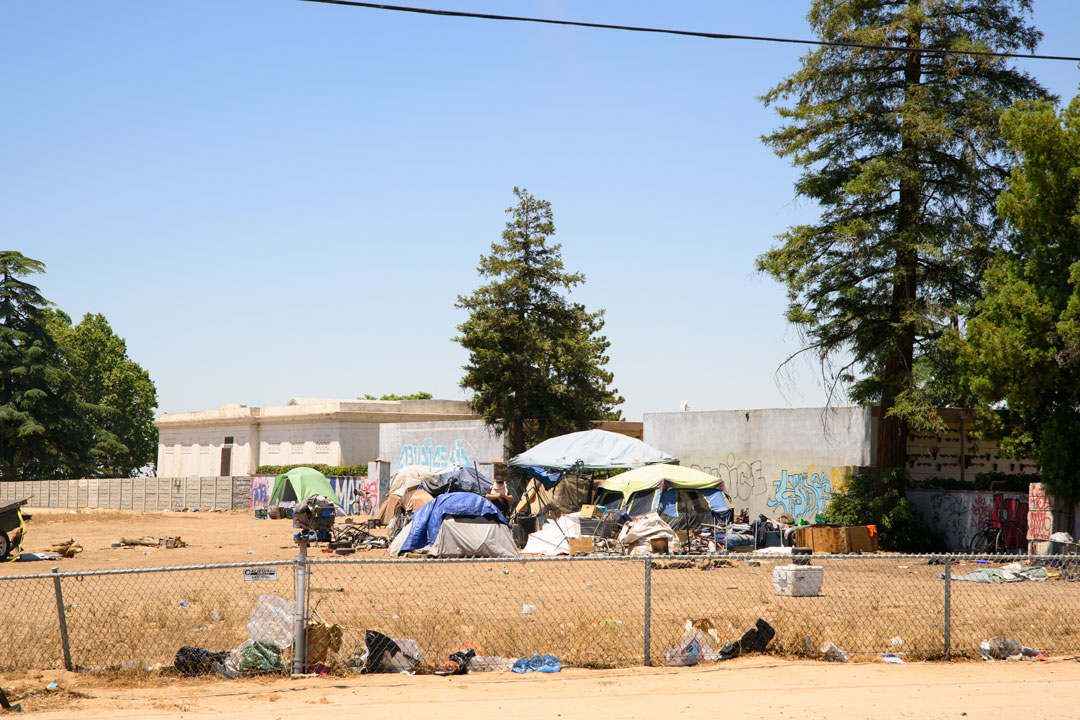 A homeless encampment at the Chinese Cemetery in west Fresno. (GV Wire/Albert Baker)
Share with friends

The most recent official count of Californians lacking permanent shelter is 161,000 — more than a quarter of the nation’s homeless population — but it’s widely assumed that the real number is much higher.

As the crisis has worsened, federal, state and local government officials have committed tens of billions of dollars to alleviating its effects. The recently enacted 2022-23 state budget alone would spend $10.2 billion over two years.

However, the heavy spending has so far had little noticeable impact. The money has been spent on a plethora of ideas to get homeless people off the street and deal with their underlying issues, but there has been little coordination, much less anything like a comprehensive plan, as a 2021 report from the state auditor’s office pointed out.

“With more than 151,000 Californians who experienced homelessness in 2019, the state has the largest homeless population in the nation, but its approach to addressing homelessness is disjointed,” the sharply worded report said. “At least nine state agencies administer and oversee 41 different programs that provide funding to mitigate homelessness, yet no single entity oversees the state’s efforts or is responsible for developing a statewide strategic plan.”

The lack of intergovernmental cooperation and coordination has many root causes, and one of them is the difference between cities and counties. Overwhelmingly, the visible effects of homelessness — such as squalid sidewalk encampments — are concentrated in cities, particularly the most populous ones, but county governments are responsible for administering social services.

A case in point is the squabbling now underway in Sacramento over how to deal with its homelessness crisis, centered on downtown streets surrounding the state Capitol.

Darrell Steinberg, a former president pro tem of the state Senate, was elected Sacramento’s mayor on a promise to deal with homelessness, but after several years of wheelspinning, was confronted with a ballot measure proposed by local business interests that would compel the city to act.

It would have required the city to authorize emergency shelter space for 75% of Sacramento’s unsheltered people within 60 days of voter passage. City officials hurriedly drafted a softer alternative, requiring shelter for 60% of homeless residents and 20% of them within 90 days of voter approval. Sponsors of the original measure agreed to put it on the shelf.

Last week, however, the city council more or less reneged on the deal. Just days before the deadline for placing measures on the November ballot, the city council made a major amendment that would block implementation unless county officials agreed to provide mental health and other services at the proposed shelter sites.

City officials had hoped that the county would emulate their measure with one of their own, but county officials balked and, instead, drafted a tough ordinance to ban homeless camps in the American River Parkway, which runs through the city. Such a law, city officials fear, could push more homeless people onto city streets.

The city’s amendment angered proponents of the original ballot measure, who said it unilaterally undid their agreement with the city.

Jeffrey Dorso, senior vice president for the Sacramento Kings, whose downtown arena is ringed with homeless camps, told council members, “I don’t know if any other ballot proponent ever going forward in the future will be ever wiling to negotiate on a ballot initiative.”

The intergovernmental discord in Sacramento is a microcosm of a statewide syndrome and unless it changes, we’ll continue to pump billions of dollars down a rathole of failure.