Bank of America Delivers $1.85 Million in Grants to Fresno and Visalia Nonprofits
Share with friends

Melissa Knight believes in the power of healing through avenues that may involve smashing glass, hitting metal, breaking household items, and throwing paint around.

She runs a rage room in Fresno’s Tower District called the Art of Anger which she started after retiring as a gender studies professor.

Unlike other rage rooms that you might see on TV, Knight says her rage room is like no other in the country.

“Art of Anger is different in so many ways,” said Knight. “People are often saying … oh I saw this on TV, or I saw this on TikTok, or I’ve been to another rage room, well you didn’t see this because we’re the only thing like us on the planet.”

What Sets Art of Anger Apart?

“We are doing this for people to heal,” said Knight. “Most rage rooms are classified as entertainment because you know it’s fun to do this, but I classify it as alternative mental health because it’s necessary to do this.”

And it’s the only rage room in the country without an age limit thus children get to take part.

Knight says that many of her clients come from throughout the state and the country — and even overseas — in their quest for options to help with depression, anger, anxiety, and other mental health disorders.

“A lot of folks are dealing with anger, their repressed anger from trauma, and with no way to release it because society doesn’t give us permission, and we don’t know how to give ourselves permission,” said Knight. “Instead we’re told the exact opposite, these heavy emotions need a physical relief because they’re heavy.”

Many of Knight’s clients are sent by therapists who think their patients might benefit. 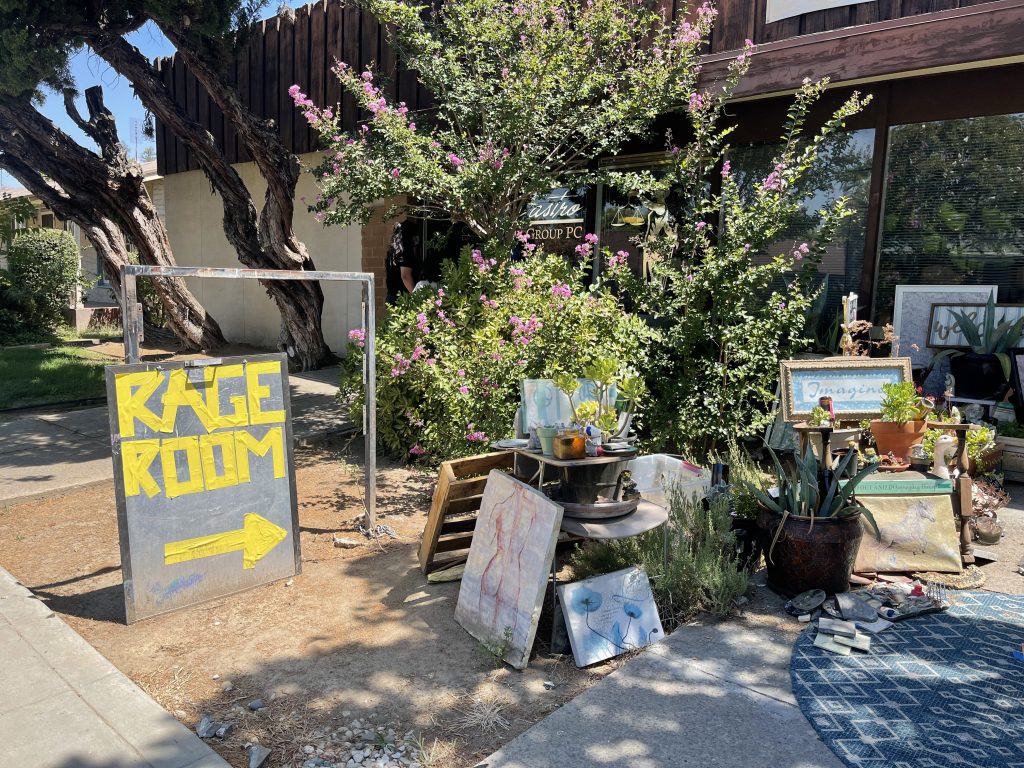 Art and plants greet visitors at the entrance to the Art of Anger at 1328 N Wishon Ave. (GV Wire/Liz Juarez)

Who Might Benefit From an Art of Anger Session?

Knight says anyone can benefit from a raging session. However, individuals who are the most likely to seek out a session are often those who deal with trauma every day such as first responders.

Others who visit, Knight said, include victims of sexual and domestic violence and people who are dealing with a loss in the family or stressed out from work.

During the COVID-19 pandemic, Knight realized there might not be a better time to start her business because so many people were cooped up inside.

A 2020 report released by the National Commission on COVID-19 and Criminal Justice stated that domestic violence incidents in the U.S. increased by 8.1% during lockdown orders in 2020.

Additionally, in 2021, a team of pediatric physicians and doctors declared mental health to be a national emergency among young children and teens after witnessing soaring rates of mental health challenges brought on by pandemic stress.

In the last month alone, Knight says she has seen at least 30 or more teens under the age of 20 coming in to deal with suicidal thoughts.

A Visitor Describes Her Experience

For Alyssa Yeager, her first session at the Art of Anger was extremely healing.

She hadn’t been to a rage room nor considered the possibility until a friend joked about their daughters’ unresolved anger issues.

“We jokingly diagnosed our girls as having ODD behavior-obstinate, defiant, and disobedient-in a very humorous and de-stressing manner in order to relate and cope with the yelling, kicking doors, and overall defiant behavior,” said Yeager.

“Our girls share similar characteristics when it comes to their demonstrations of feeling angry and we thought of how great it would be if there was a place where our girls could go and smash things and release their anger.”

Before taking her 5-year-old daughter there, however, Yeager decided to try it out for herself first, and in doing so, she worked on recent trauma of her own.

A few months ago, Yeager witnessed her best friend pass away after being his caregiver while he was in hospice.

“I think it’s good to re-experience the trauma here and let it out. I think it’s helpful,” said Yeager.

From Trauma, Some Individuals Find Art

In some cases, individuals heal from trauma, anger, and sadness by coming across objects that remind them of unresolved issues they are going through, says Knight.

She often hunts through yard sales and estate sales looking for distinguishing objects that her clients would like to use in their raging sessions.

While some may like the feeling of throwing dishes and glasses or hitting objects with a swing of a bat, others are looking for personal objects to hit and damage.

Knight described a client dealing with the trauma of being sexually assaulted by a relative who was a photographer. She found healing in using a tripod to hit objects with.

Another woman found a kickstand she enjoyed using during her rage session after sharing that her son had died from a motorcycle accident.

Through the smashing and the breaking, many of Knight’s clients will pick up broken pieces and create art to help them heal.

One group came in mourning their grandmother. After their rage session, they picked up broken pieces to make a large stepping stone to place in her garden.

“Sometimes, we design art out of brokenness, and it reminds you that you are making something beautiful,” said Knight.

Others, who may suffer from PTSD, will choose the Zen room, where they get to jump and throw paint around. It is often the last stop for people who are done raging and need time to calm down. 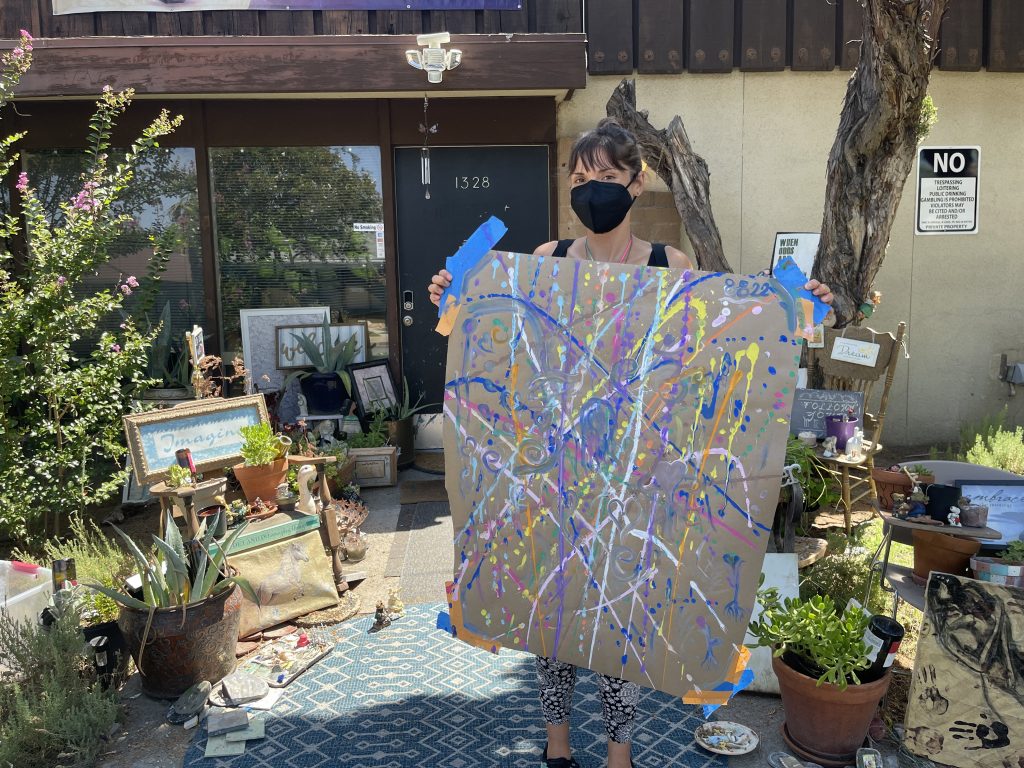 Alyssa Yeager who took part in a raging session at the Art of Anger holds up art she created in the Zen room. (GV Wire/Liz Juarez)

How to Book a Session

Prices vary depending on the room and the time spent raging.

For more information on safety click here. Pricing and booking are here.