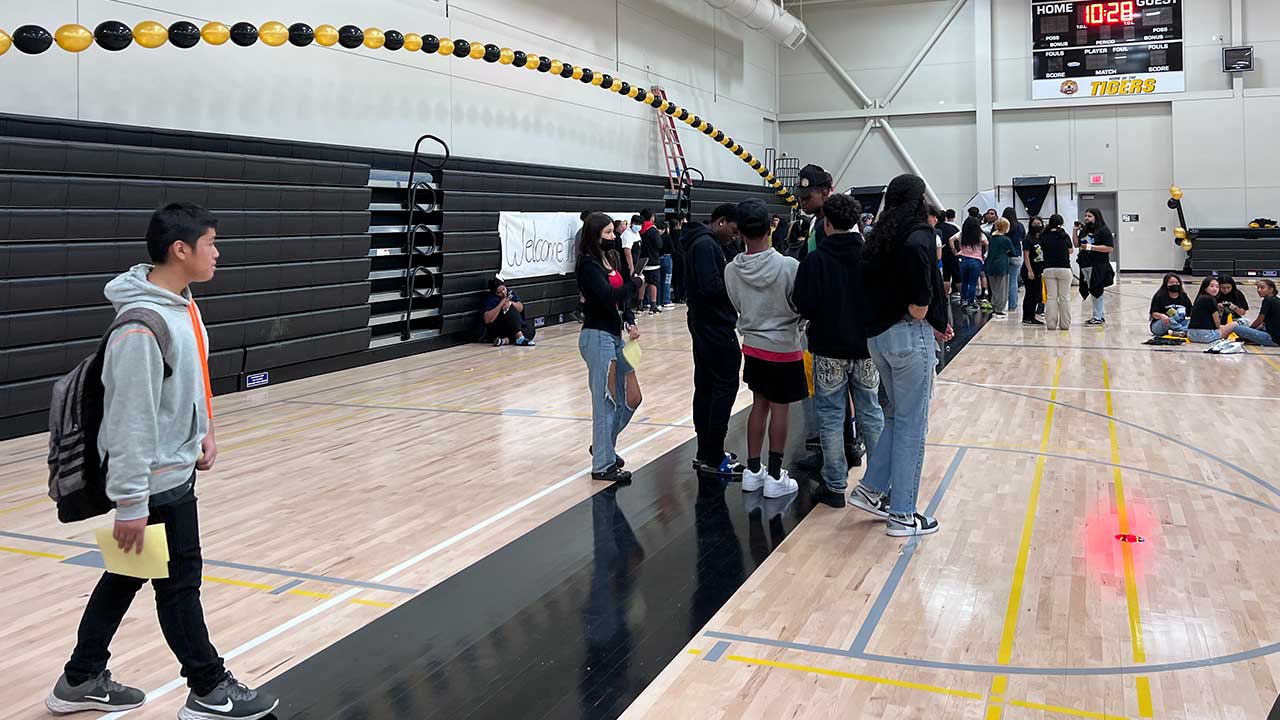 Incoming freshmen line up for their photos in the new auxiliary gym at Edison High School on Friday. (GV Wire/Nancy Price)
Share with friends

The first day of the new school year is rapidly approaching for Valley students and school staffers, and with the new year comes new starting times and bus schedules, a new Fresno elementary, and a new gym at a Fresno high school.

Many people will be glad to hear that even though COVID-19 infection rates remain high in Fresno County, face masks will not be required but will be available to those who want them, Fresno Unified officials said last week. Neither Clovis nor Central will require masking, either.

This is the first year that starting times for middle and high school students are required to be later in California, causing school districts to adjust bus schedules as well.

“Thankfully for our district, the impact was relatively small as many of our schools were already in compliance with the dictates of SB 328 (the Late Start Initiative),” he said.

Clovis Unified, which starts school on Aug. 22, is still in the process of finalizing bus routes but should have schedules posted by Aug. 15, spokeswoman Kelly Avants said.

The first day of school Aug. 15 will literally be the first day for students attending Fresno Unified’s brand-new Juan Felipe Herrera Elementary in southeast Fresno. The school, named for Fresno’s famous poet, will have a STEAM focus, where teachers will use science, technology, engineering, and the arts as a springboard for reading and math lessons. The school will also be the site of a United Health Centers clinic.

And at Edison High School, students will have more gym capacity with the completion of an auxiliary extension to the original cavernous facility. Community members got a peek last week at the new space, which also includes two classrooms, last week.

The expanded gymnasium space provides an opportunity for Edison to host tournaments, said Alex Belanger, chief executive of operational services for FUSD. The gym renovation also included a new entrance foyer and a snack bar where students can get food during the school day in addition to the cafeteria, he said. 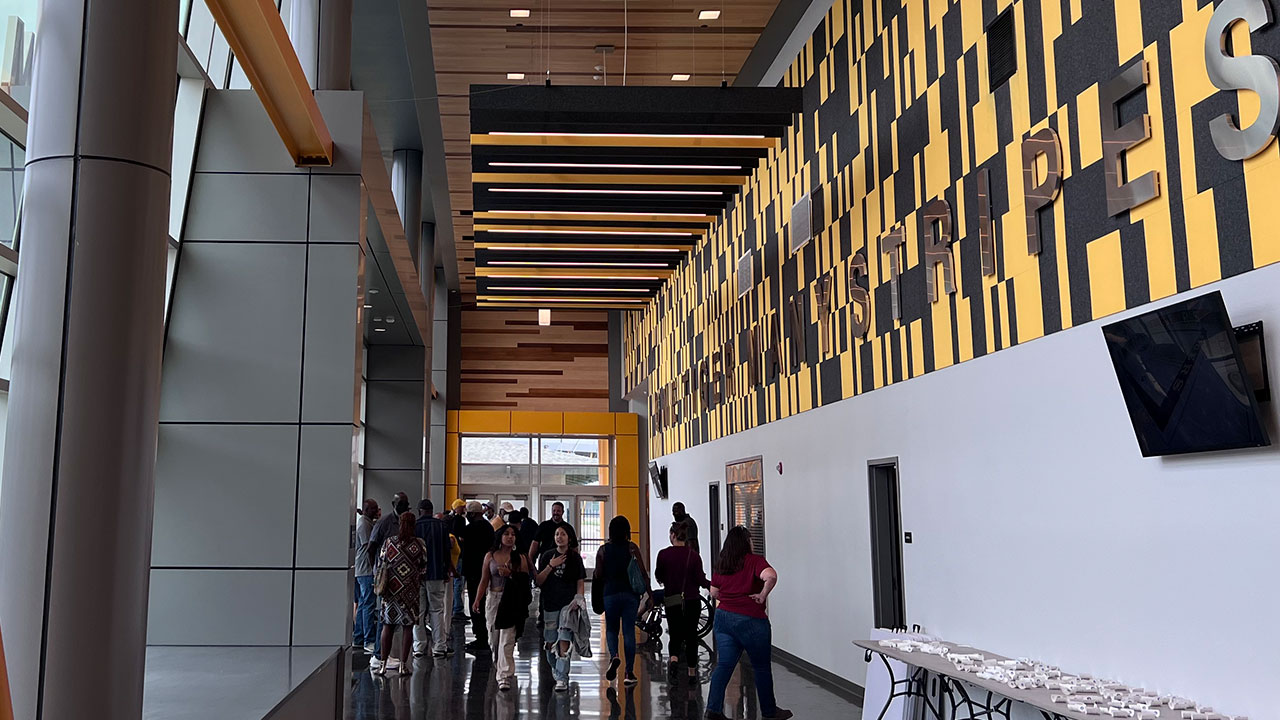 Central Unified, where classes start on Wednesday, is “ready to start the year strong, thanks to our administration and human resources department who have been working incredibly hard through the summer months,” district spokeswoman Gilbert Magallon said in an email.

The district is still actively recruiting to fill some positions, including special education staff, he said.

Enrollment is projected to climb by about 100 students over last year’s count of 15,750, Magallon said.

As for the new bus schedules, the Board of Trustees approved adding buses last spring, and elementary school students will now start school earlier than secondary students, he said.

Central Unified will continue to focus this year on closing the learning gap that widened during the pandemic and is adding teachers to assist English-language learners and support newcomers, and staffing reading and math labs so classroom and intervention teachers can coordinate efforts to boost students to grade level. The district also is providing credit recovery classes year-round for high schoolers instead of just the summer break, he said.

In addition, Central Unified is investing in students’ well-being with more intervention counselors and de-escalation staff as well as expanding the parent outreach team, Magallon said.

Fresno Unified, which heads back into the classroom on Aug. 15, has only a few teacher vacancies yet to be filled. Although other districts around the country are scrambling to staff classrooms, Fresno only needs to hire 20 more teachers in hard-to-fill areas such as math, science, and special education, Nelson said during a news conference last week.

Likewise for bus drivers, which are a rare commodity in other areas but not for Fresno Unified, Nelson said. FUSD employs drivers on a full-time basis so they are guaranteed eight-hour workdays, he said.

School officials will continue their focus on keeping students and staff safe from COVID-19, Nelson said. Masks will be recommended but will be optional, and parents will be encouraged to vaccinate their children to protect them from the virus, he said. The only required vaccinations are the traditional ones for childhood diseases.

Students and staff who show symptoms of COVID-19 will be advised to stay home until they are symptom-free. Unlike last year, there will be no simultaneous instruction of students in classrooms and at home, Nelson said.

As for closing the learning gap that opened during the pandemic, Nelson said the new universal afterschool will help students catch up by focusing on areas where they are struggling. Previously, the afterschool program was designed to be more general, but this year district officials are finetuning it so that teachers or teaching fellows who are overseeing the afterschool programs will know where students need more assistance and then tailor lessons to each child, he said.

Trustee Andy Levine, one of two board members to attend Thursday’s news conference, encouraged students and families to take advantage of counseling services. The pandemic and its aftermath revealed that many students lost ground in their social-emotional learning, he said.

The district has made an “unprecedented investment in mental health supports,” to help students focus better on classroom learning, Levine said.

Board Clerk Veva Islas noted that even though the pandemic caused learning to be virtual and required students and their families to increase their digital literacy, not all parents are completely comfortable yet. She urged them to take advantage of the district’s Family Literacy and Tech Support (FLATS) advisers.

District spokeswoman Nikki Henry said the projected enrollment for the 2022-23 school year is approximately 69,500, the same as last year.

Students’ travels to and from school might be a little bit safer this year. The district’s crossing guard vendor, Safe2Schools, is in the process of recruiting more crossing guards, Henry said. “We certainly expect those efforts will result in providing more sites with volunteer crossing guards throughout the school year,” she said.

Clovis Unified, with a later start date on Aug. 22, still has some time to finish recruiting and hiring for some open positions, including special education and science teachers, bus drivers, instructional assistants, and campus catering, Avants said.

As of last week the district had already hired more than 140 new teachers due to retirements, growth, and regular attrition, she said. The district’s hiring process is line with a typical school year, Avants said.

More teachers will be needed in part because the district expects enrollment to climb slightly in the new school year, based on summer enrollments and projections. Some of those additional students will be due to a change in state law that lowered the eligibility age for transitional kindergarten to children who turn 5 between Sept. 2, 2022 and Feb. 2, 2023. Last year, eligibility ended on Dec. 2, she said.

In anticipation of the new start times, Clovis Unified conducted intensive engagement efforts for students, staff, and the community starting last fall and adopted new bell schedules in January, Avants said. Over the spring the district worked with communities to prepare for the new bell schedules to start this fall.

The district also is continuing to work to close the learning gap with interventions and professional development efforts that have been in place for the past two years, by providing more teachers and materials, supporting teacher development, adding counselors at the primary and second levels, and using state assessment data to determine how best to support individual students, she said.

For more information about Clovis Unified’s new school year, go to this website.