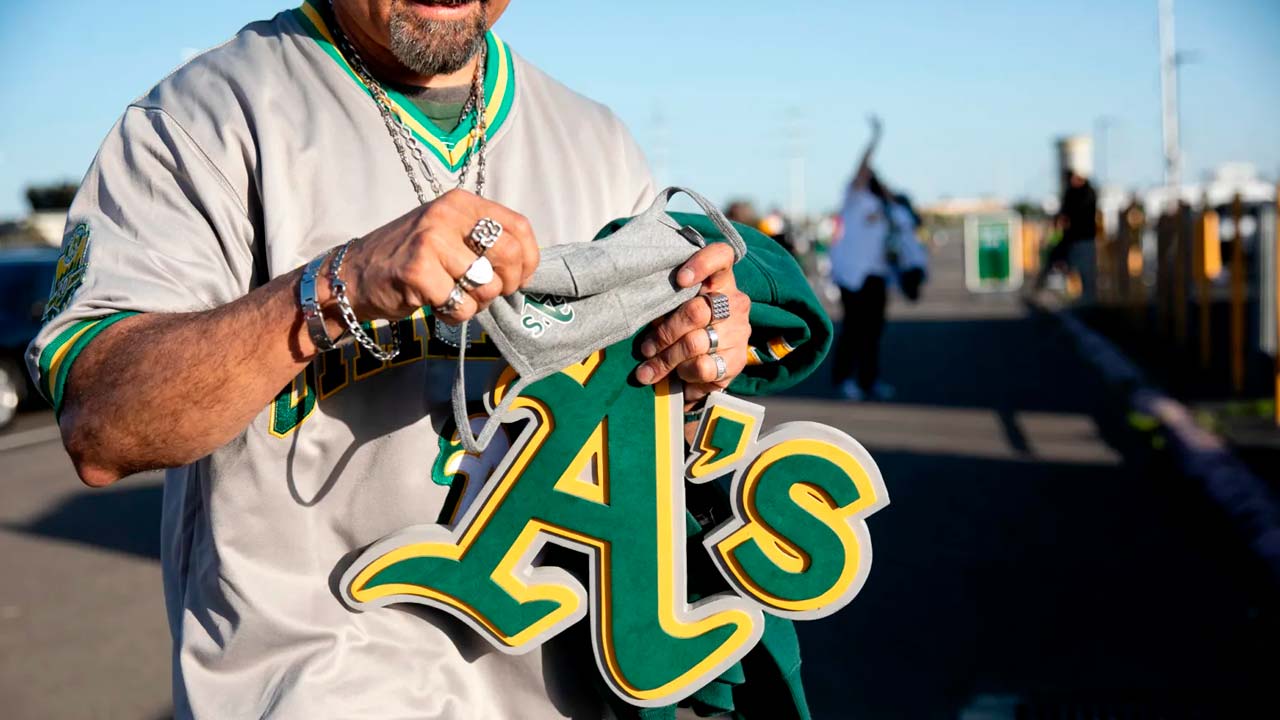 An Oakland A’s fan carries swag as he gets in line to enter the stadium before the start of a game. (CalMatters/Anne Wernikoff)
Share with friends

As the 2021-22 state budget was being finalized in June of last year, a $279.5 million appropriation was quietly inserted into the massive spending plan before it was sent to Gov. Gavin Newsom.

“Funds appropriated in this item shall be for the Port of Oakland for improvements that facilitate enhanced freight and passenger access and to promote the efficient and safe movement of goods and people,” the budget declared.

Seemingly, the Legislature was responding to numerous pleas from the shipping industry for upgrades to maintain the port’s viability in the face of intense competition for international trade.

However, when the port commission recently approved a list of specific projects the money would finance, its long-suspected true purpose became clear. The money would not be spent to improve cargo-handling, but rather to subsidize development of a new stadium for the Oakland A’s baseball team on a disused container site known as Howard Terminal near Jack London Square.

The money would pay for facilities to make it easier for baseball fans to access the new stadium. They apparently would be the “passengers” the appropriation cited.

For years, A’s owners, citing inadequacies of the Oakland Coliseum, have yearned for a new stadium while threatening to move the team if its demands were not met. At one point, the team tried to move to San Jose, but that city was part of the San Francisco Giants’ designated territory and the Giants refused to relinquish it.

Oakland officialdom, having lost the Raiders football team to Las Vegas and the Warriors basketball team to San Francisco, is desperate to keep the A’s in Oakland and a number of potential stadium sites have been explored.

Finally, the city and A’s owner John Fisher, a scion of the family that owns clothier Gap, settled on the 55-acre Howard Terminal site, not only for a new baseball stadium but a $12 billion residential and commercial complex.

The decision didn’t sit well with the shipping industry, which saw it as an intrusion on cargo-handling operations.

As Fisher was negotiating with city officials over the project last year, state Sen. Nancy Skinner, a Democrat who represents Oakland and chairs the Senate Budget Committee, slipped the $279.5 million appropriation into the budget bill and it eventually was approved by the full Legislature and Newsom.

It’s just a tiny fraction of a 2021-22 state budget that approached $300 billion but would have been enough to build affordable housing for more than 500 low- and moderate-income families.

Moreover, it represents two common but unseemly practices in the state Capitol.

The first is using the state budget, which is largely drafted in secret with little opportunity for the media and the public to peruse its details, as a vehicle to deliver goodies to those with political pull.

After the budget and its attendant “trailer bills” are enacted each year, we learn — too late — exactly who has received special attention, either in the form of money or some beneficial change of law.

The second is the slavish attention that California politicians devote to the welfare of professional sports teams and their wealthy owners. Every major sports arena project in recent years has received some sort of help from the Capitol, mostly exemptions from the environmental red tape that other big projects must navigate.

The $279.5 million may not technically be a gift of public funds to a private developer, but it certainly smells like one.