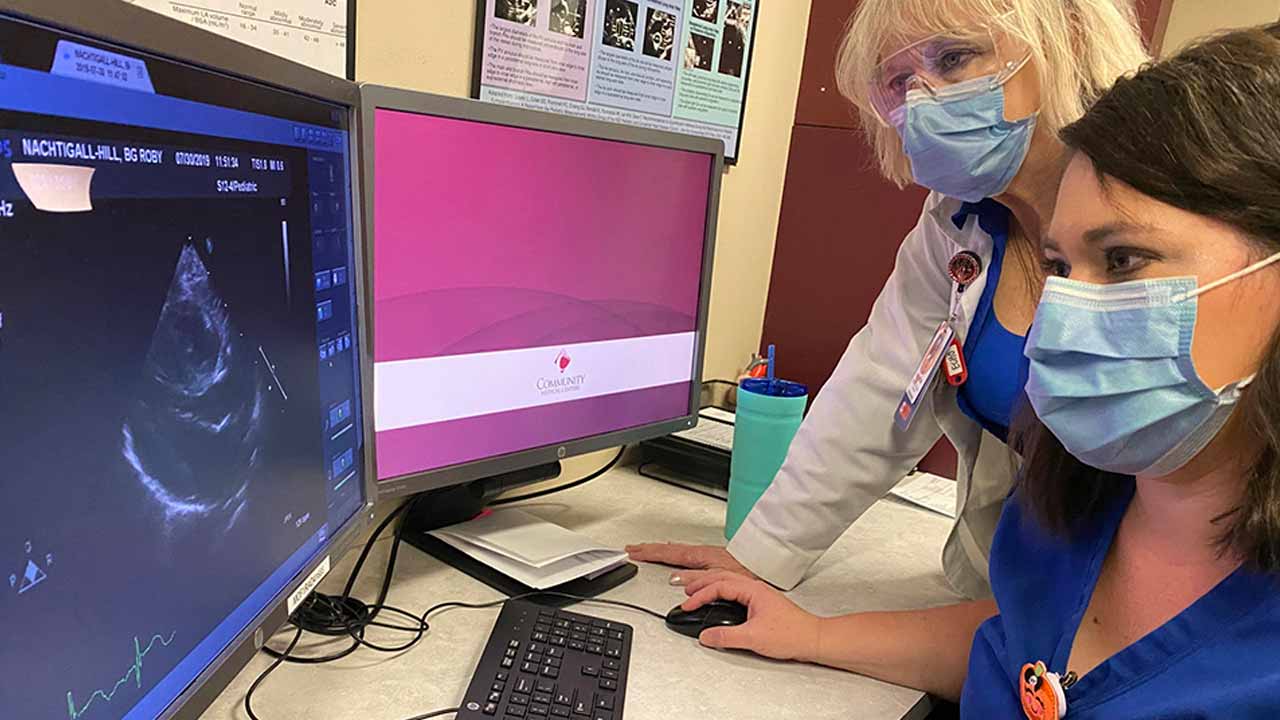 In a twist of fate, provider and patient are reunited – this time as sonography mentor and student. (Community Medical Centers photo)
Share with friends

Robyn Nachtigall-Hill knew she wanted to be a sonographer since she was 12 and undergoing cancer treatment. In a unique twist of fate, the woman who helped save her life as a preteen is the same woman who would someday become her sonography mentor, and later help save her daughter’s life as well.

Joy Guthrie was part of Nachtigall-Hill’s cancer care team at Valley Children’s Hospital. Guthrie performed echocardiograms to make sure her chemotherapy treatments for bone cancer weren’t damaging her heart. (An echocardiogram uses sound waves to produce images of your heart.)

A decade after that first meeting, Nachtigall-Hill encountered Guthrie again when she applied to the sonography training program at Community Regional Medical Center. Joy Guthrie is the director of sonography training at the downtown Fresno hospital and an assistant professor of medicine at UCSF Fresno in Echocardiography.

There were 84 applicants and only 14 spots in the cohort Nachtigall-Hill applied for, so Guthrie asked a crucial question: Why do you want to train in ultrasound technology?

“Medical imaging was a huge tool in the diagnosis of my cancer,” Nachtigall-Hill said. “It inspired me … I want to be part of something that had helped me, and I want to give back.”

Guthrie said she immediately recognized the crooked grin of her former patient and knew she was someone who could persevere during tough times. Nachtigall-Hill had survived Ewing’s sarcoma, a rare cancerous bone tumor, and amputation of her leg as a preteen.

“She lost her leg but not her drive,” Guthrie said. “I think anyone who goes through cancer has a certain internal resilience. And she certainly excelled in our program.”

Nachtigall-Hill was accepted into the training program and was later hired as a pediatric sonographer at Community to perform echocardiograms on the hospital system’s tiniest patients.

“Sonographers are a hard-to-fill position and it takes a lot of one-on-one and hands-on training to produce one sonographer,” said Guthrie. Currently, half of Community’s sonographers and ultrasound techs are graduates Guthrie helped train.

The need for trained diagnostic medical sonographers, cardiovascular technologists and ultrasound techs continues to grow, with a projected need of 12% more sonographers by 2029, according to the U.S. Bureau of Labor.

That need is especially acute in Fresno, which has high rates of premature births. Nachtigall-Hill trained to do ultrasound scans on those tiny pediatric patients and applied that expertise in Community Regional’s neonatal intensive care unit (NICU).

Luckily, Nachtigall-Hill could get that training close to where she grew up and attended college. Community Regional’s 18-month program is unique in the Central San Joaquin Valley. The nearest hospital-based training programs in sonography and ultrasound technology are in the Bay Area and Los Angeles, meaning Central Valley students have a unique opportunity to join a state-of-the-art team right in their backyard.

Sonography uses high frequency sound waves (ultrasound) to produce images of organs, tissues or blood flow inside the body. It’s used to examine many parts of the body and is increasingly used to detect and treat heart and vascular disease.

Community Regional’s sonography training program is the only one in the nation currently accredited in all five sonography disciplines:

Community Regional was also the first in the nation to be accredited to train advanced cardiac sonographers, who are able to extend the care of cardiologists, much like nurse practitioners do for physicians. And it’s the only program in California accredited to teach ultrasound techniques needed to detect anomalies in the tiny hearts of premature babies.

After working side by side with her mentor, Nachtigall-Hill has benefited greatly from Guthrie’s 30 years of sonography expertise. It was expertise she turned to when she started feeling off halfway through her own high-risk pregnancy.

After a busy Friday afternoon, she confided in her boss and mentor about unusual fluid leakage. Guthrie was concerned and asked if she could take a quick look.

Although Nachtigall-Hill’s first pregnancy was healthy, as was the beginning of her second, Guthrie noticed something shocking when she performed the scan. “To my surprise, her cervix – you know, what keeps the baby inside the uterus – to our shock and our dismay, it was totally open,” Guthrie said.

Guthrie quickly called one of the hospital’s perinatologists to ask what to do next. “I explained the gravity of the situation and got her into a wheelchair. We didn’t want her to stand up since that might make her go into labor. She was at a point that if she went into labor, then there would be no chance of saving the baby.”

Guthrie wheeled Nachtigall-Hill over to the hospital where she was assessed, stabilized and sent home for bed rest. Two weeks later, she was readmitted because she was having contractions. At 22 weeks and six days’ gestation, baby Regan was born weighing 1 lbs., 7 oz.

“The minute I saw her I just had this hope, and I knew that God was going to take care of her,” Nachtigall-Hill said. And she knew her daughter was in expert hands at Community Regional, which delivers the most micro-preemies – newborns weighing less than 3 lbs., 5 oz. – than any California hospital. “The doctors and everyone did an amazing job taking care of her.”

“I have never witnessed such a collaborative effort in trying to save this tiny miracle baby. Our neonatologists, nurses, respiratory therapists, a surgeon and the entire NICU staff worked tirelessly to save our little Regan,” Guthrie said.

Nachtigall-Hill asked her mentor to be part of the effort and do all of the ultrasound procedures and echocardiogram scans that Regan might need. “I washed my hands a million times and prayed every time I touched her,” said Guthrie who, as a premature infant herself, felt a special bond with her tiny patient. “That first echo, she reached out and grabbed my finger. I knew that little Regan could fight and survive.”

Regan not only survived but has thrived. At 18 months, Regan is developmentally where she is expected to be. “She’s at home with us, and she’s really active and just a happy girl,” Nachtigall-Hill said. “She is taking steps right now. We were concerned because she had a little brain bleed in the hospital, but she’s hitting the milestones she should. She’s starting to say things like, ‘Daddy.’”

Guthrie’s thrilled her quick thinking and a team of experts were able to give Regan a fighting chance to grow into an active toddler with the same crooked smile as her mom. “But to me the real hero in this story is Robyn,” Guthrie said. “She’s just grace under fire and you can put any obstacle in front of her and she just rises above.”

Nachtigall-Hill said she’s been lucky to have Guthrie there during the crises in her life: “We were meant to be together and work together.”