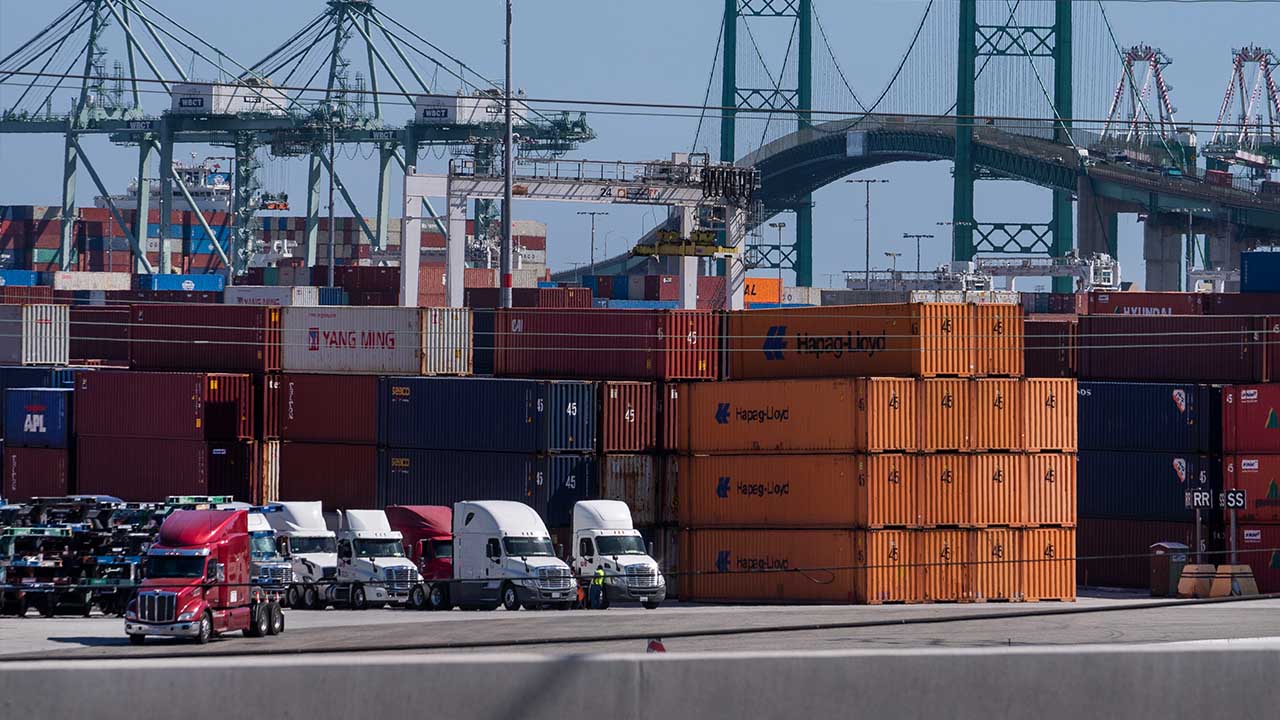 Trucks lined up next to containers at the Port of Los Angeles. (AP File Photo/Damian Dovarganes)
Share with friends

As California’s post-World War II industrial economy slumped during the 1970s, civic and business leaders in the state’s two major metropolitan areas made some momentous bets on their economic futures.

While the San Francisco Bay Area opted for the emerging sector of digital technology, Southern California — Los Angeles particularly — believed that its future lay in logistics, tying the region to the fast-growing economies of Asia.

Southern California expanded and modernized its twin ports of Los Angeles and Long Beach to handle what became a flood of container ships from China and other Asian nations. Rail and highway connections were improved and the region’s “Inland Empire” became a massive logistics center of warehouses and distribution centers serving the entire nation.

It’s estimated that 40% of U.S. imports and 25% of the nation’s exports pass through Southern California’s ports.

Although logistics industry salaries are not high in comparison to those of the Bay Area’s tech industry, its warehouses and other facilities have provided much-needed jobs for the wave of immigrants, mostly from Latin America, that Southern California experienced in the 1980s and 1990s.

However, despite its importance, Southern California’s logistics industry faces an uncertain future as the movement of goods becomes increasingly competitive and, as industry leaders complain, new state laws and regulations raise operational costs that could encourage shippers to go elsewhere.

Attorney General Rob Bonta sued the city of Fontana for approving a warehouse close to a high school and Assemblywoman Eloise Gómez Reyes, a San Bernardino Democrat, introduced legislation requiring new warehouses in Riverside and San Bernardino counties to be located at last 1,000 feet from “sensitive receptors” such as schools.

Business groups have opposed the measure, saying that its setback requirements and a provision of the bill requiring unionized labor on warehouse projects would hamstring development of facilities needed to handle ever-increasing amounts of cargo. The bill has passed the Assembly and is pending in the Senate.

He specifically cited new rules from the California Air Resources Board that prohibit older trucks from handling cargo at the ports and require replacement trucks to be zero-emission vehicles “that are currently unavailable due to the shortage of semi conductors and other equipment.”

The prohibition is supposedly aimed at protecting port jobs from being automated but McLaurin told Newsom that unions have already agreed to provisions allowing automation, which is needed to keep Los Angeles and Long Beach ports competitive in the battle for shipping business vis-à-vis other ports.

“California’s ports have no more room to grow — except up,” McLaurin said. “If we are to meet the needs of California consumers and exporters, support hundreds of thousands of supply chain related jobs and function as a competitive gateway, innovation along the waterfront should be encouraged — not stifled.”

These issues are a warning that as logistics have become so important to Southern California’s economy, the industry’s future should not be taken for granted.

If You Want to Get Climate Serious, Then Get Nuclear Serious