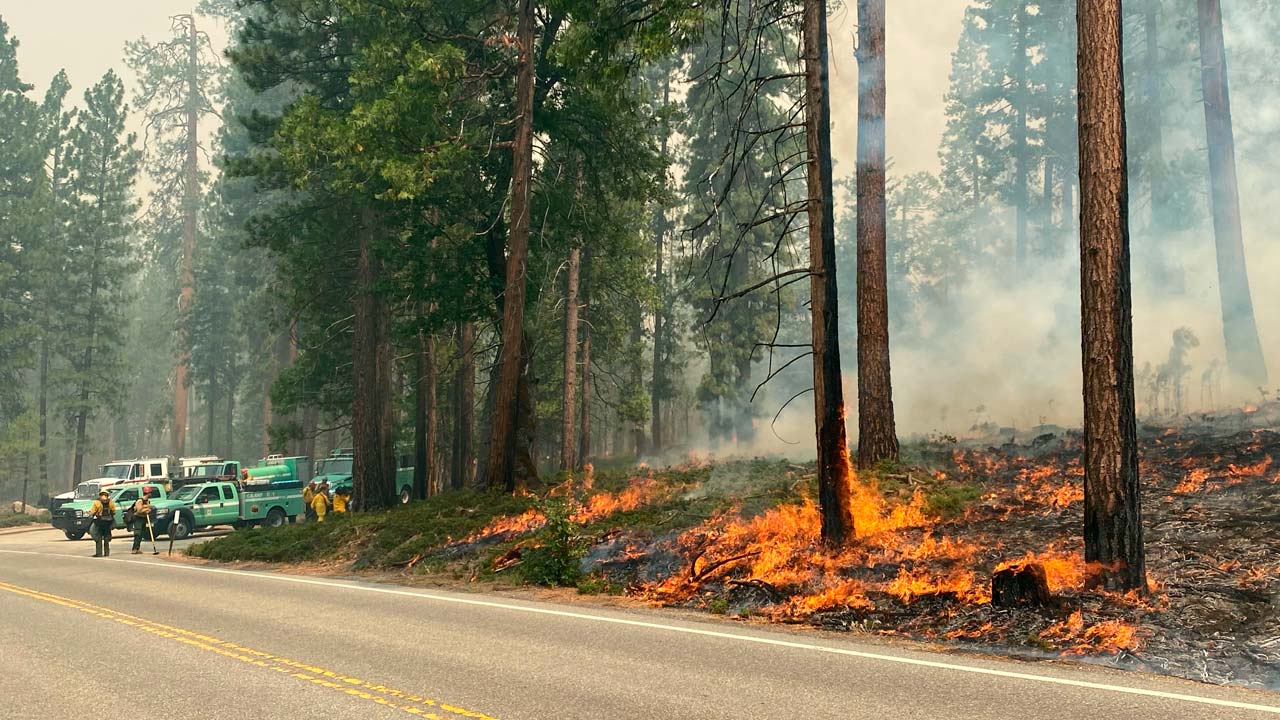 The Washburn Fire burns next to a roadway north of the Wawona Hotel in Yosemite. (National Park Service via AP)
Share with friends

Firefighters gained ground Monday in the battle against a wildfire that poses a threat to a grove of giant sequoias and a small community in Yosemite National Park.

The Washburn Fire on the western flank of the Sierra Nevada had scorched about 4.2 square miles but was 22% contained as of Monday night, according to an incident update.

The fire was a threat to more than 500 mature sequoias in the park’s Mariposa Grove and the nearby community of Wawona, which has been evacuated.

The area in the southern portion of Yosemite was closed to visitors but the rest of the national park remained open.

Mariposa Grove and Yosemite Valley have been protected since President Abraham Lincoln signed legislation in 1864.

A sprinkler system was set up within the grove to maintain moisture, and there were no reports of severe damage to any named trees, including the 3,000-year-old Grizzly Giant.

“Fortunately, the Mariposa Grove has a long history of prescribed burning and studies have shown that these efforts reduce the impacts of high-severity unwanted fire,” a National Park Service statement said.

A heat advisory was issued for the Central Valley while up in the fire area, a high temperature of 96 degrees was recorded for the village of Wawona, where hundreds tourists and residents were forced to evacuate last Friday.

“Fortunately there has not been any erratic winds that have affected fire behavior,” fire information officer Marc Peebles said earlier in the day. “We do have the high pressure that’s over the top of the fire which is causing the increase in temperatures. However, we do get a decent amount of humidity at night which moderates fire behavior which allows our night shift firefighters to do good work.”

The giant sequoias were once considered impervious to flames but have become increasingly vulnerable as wildfires, fueled by a buildup of undergrowth from a century of fire suppression and the impact of drought exacerbated by climate change, have become more intense and destructive.

Lightning-sparked wildfires over the past two years have killed up to a fifth of an estimated 75,000 large sequoias.

There was no obvious natural spark for the fire that broke out Thursday next to the park’s Washburn Trail. Smoke was reported by visitors walking in the grove.

A fierce windstorm ripped through the grove more than a year ago and toppled 15 giant sequoias, along with countless other trees.

The downed trees, along with massive numbers of pines killed by bark beetles, provided ample fuel for the flames.

In Utah, smoke and ash emanating from a growing wildfire in rural Tooele County blew into Salt Lake City on Saturday. By Monday night, the Jacob City Fire had grown to 6.4 square miles , with 19% containment, officials said.

So far in 2022, over 35,000 wildfires have burned nearly 4.7 million acres in the U.S., according to the National Interagency Fire Center, well above average for both wildfires and acres burned.