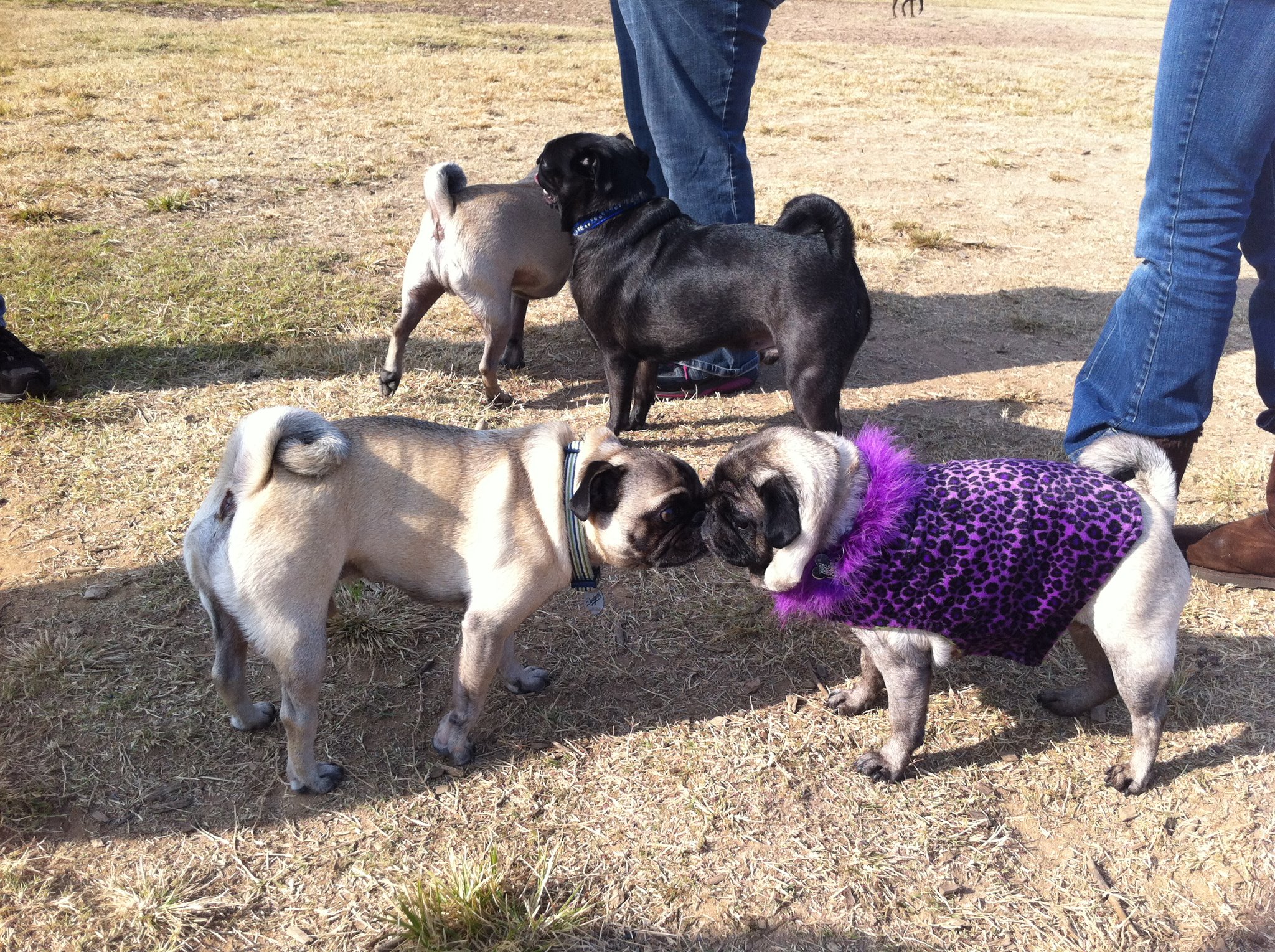 Fresno has dropped in an annual ranking of dog park cities and local advocates are calling for better amenities for their pooches. (Fresno Pugs in the Park)
Share with friends

In a list of 93 cities across the U.S. ranking the best dog park cities, Fresno landed in a much lower spot after ranking in the top 50 in 2021.

This year’s 2022 report by the lawn care website, LawnStarter, shows Fresno received an overall rank of 72 – dropping down 58 places from last year’s No.36 spot.

Jose Leon Barraza, parks commissioner for District 5 says the cities low park rankings are an overall reflection of the condition of Fresno parks.

“In the past due to limited financial resources many parks in Fresno are not well maintained,” said Leon – Barraza.” A more positive trend for the funding of  parks in general and for dog parks in particular will improve in the near future as Measure P funds continue to be allocated to improve existing parks and build new ones.”

Leon-Barraza says some funding from Measure P was allocated to dog parks this year, and perhaps more can be allocated next year.

However, he says he would like to hear from more of the city’s residents on their opinions in improving Fresno’s dog parks.

Leon-Barraza says there are many other competing issues city residents are advocating for – like basic recreational park amenities in the city.

Therefore, city residents who want to see improvements in the city’s dog parks must show up to advocate for them

“Folks that support dog parks must also participate in city meetings and surveys and express their support for dog parks when recommendations for the allocation of Measure P funds are discussed,” said Leon- Barraza.

Additionally, improvement plans for the city’s dog parks have been included in the city’s master parks plan he said.

Cinnamon Grooms, Founder and CEO of the non-profit organization Tiny Paws Fresno says she has met with city officials to discuss ideas on how dog parks can be improved several times.

Her organization hosts events to bring small dogs together to play while teaching them etiquette & behavioral skills.

However, she says the city stopped meeting with her a few months ago and hasn’t heard back from them on whether they would be adopting any of her ideas.

In the past, Grooms has attended city council meetings advocating for better facilities and changes to Roeding Park – a park she and her organization often utilize.

“I gave them my 15 page illustration, a total example of the ideal dog park with all the amenities and where the gates should be so there’s no confrontation between dogs and when people are trying to get into the play areas,” said Grooms.

Grooms says she recalls the city planting eight new trees at Roeding Park a couple years ago, and they all ended up dying from lack of watering.

“My disappointment is you know, they have good intentions to upgrade these parks in Fresno, but they’re just not doing it quick enough,” said Grooms. 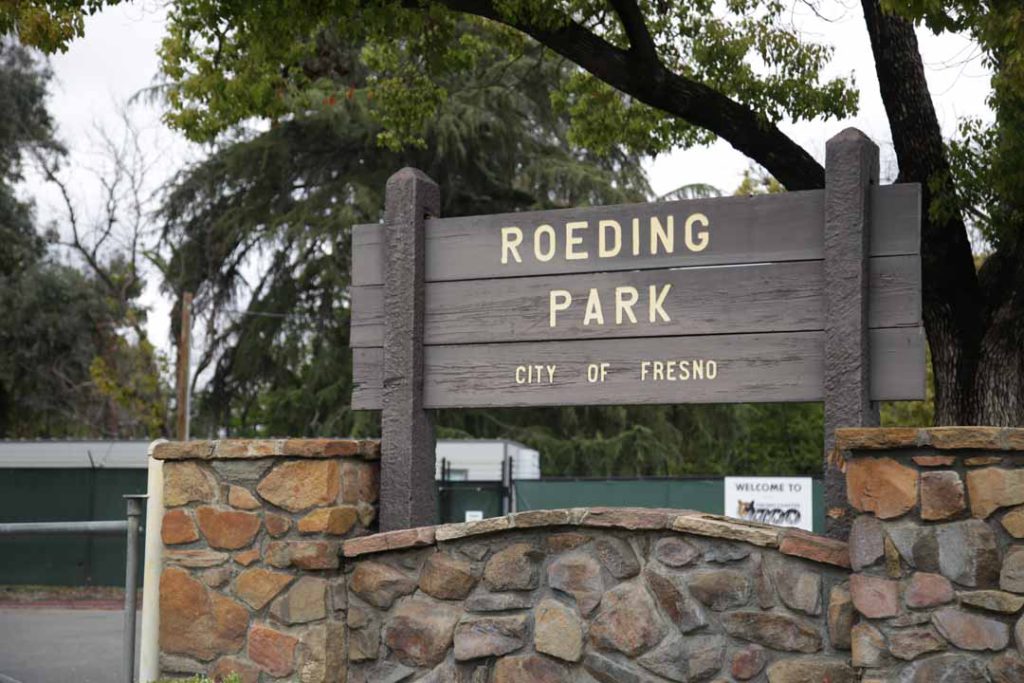 Roeding Park is a park near the Fresno Chaffee Zoo. (GV Wire/Jahz Tello)

Karisma Silacci, a former dog trainer has lived and traveled in different cities across the U.S. before moving to Fresno in 2009.

A few years ago, Silacci created Facebook group, Fresno Pugs in the Park as a way to bring pugs and their owners together.

On the first Saturday of every month, Silacci and group of 10 to 12 people will meet at Woodward Park to socialize, train and educate other members about pugs.

However, just like other local dog groups, Silacci says they have trouble finding places to take their dogs to, and even Woodward Park, which she considers one of the nicest parks in Fresno could use a bit more grass and space for little dogs.

Silacci says they also frequent El Capitan park because parking is free there, but there are no amenities for dogs.

“It’s pretty much just like a stump. So when it’s wet, it’s disgustingly wet and muddy and miserable, and then there’s not a lot of shade and we have pugs…so they get overheated really easy,” said Silacci.

Dog Park Advocates Share How Dog Parks Can Be Improved

Living in different cities across California has given Silacci ideas on how Fresno parks can be improved.

She says Petco Park Stadium in San Diego has water bowls built in everywhere around the park for dogs to drink out of, they also have plenty of shade, and a patio area for the dogs – amenities Silacci wishes Grizzly Stadium could have.

Grooms says she doesn’t know if the changes she has asked the city to make are being considered at all.

At first, when meeting with city officials, Grooms requested a few agility courses to be put in for dog parks.

“I even suggested water spouts… the water filters that shoot up from the ground to cool dogs in the summer,” said Grooms. “I was suggesting people can pay 10 cents for the water to spray out of the ground for 10 minutes.”

Grooms recognizes that the city is not lacking in money, but charging a few cents to turn on water spouts could help dogs stay cool in the summer and give back to the city and it’s parks.