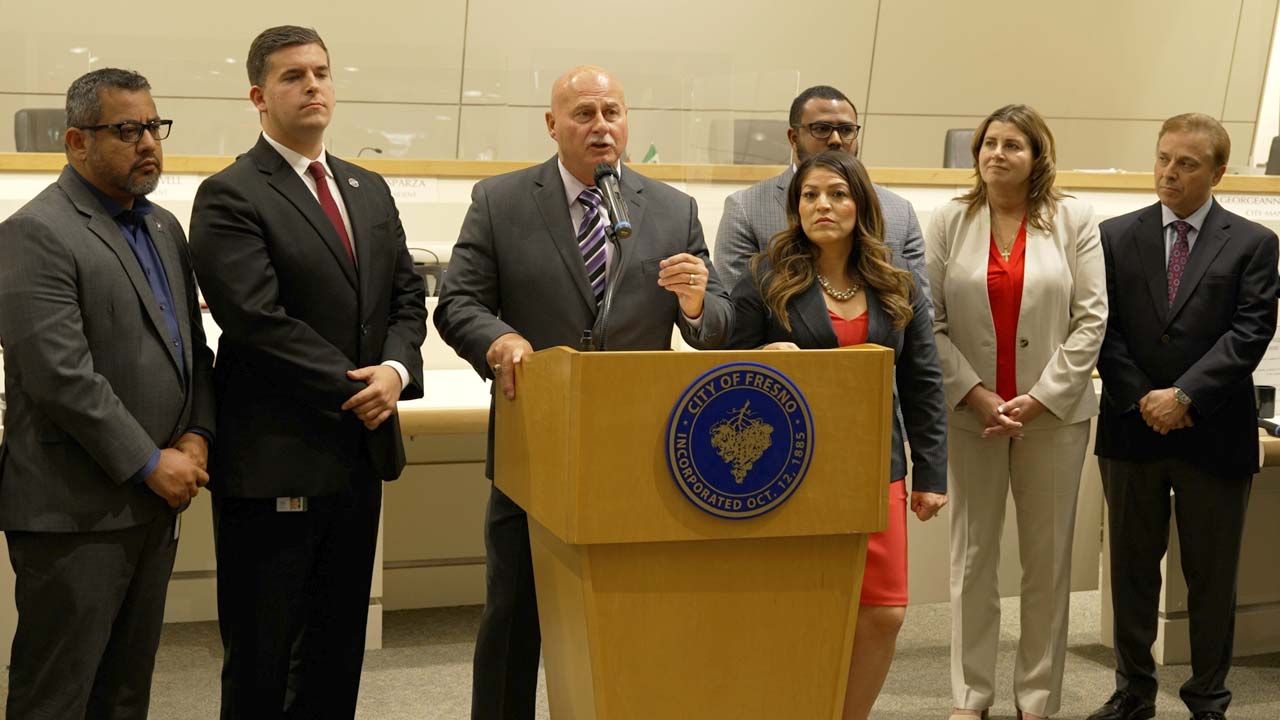 Fresno Mayor Jerry Dyer speaks at a news conference alongside councilmembers and staff after the city's adoption of a $1.9 billion budget. (GV Wire/Albert Baker)
Share with friends

For 1.9 billion reasons, the Fresno budget had something for all city councilmembers to like. But one briefly tempered the celebratory mood at City Hall with a note of caution.

By a 7-0 vote, the council approved a $1.9 billion budget, the largest in city history, at its Thursday meeting.

Dyer’s team worked into the early morning hours of Thursday to incorporate all the proposals. The mayor later called the spending plan “not a good budget, but a great budget for the people of Fresno.”

“This budget again provides unprecedented investments in our neighborhoods and housing in our parks and public safety, both police and fire department, youth development, as well as our intervention and prevention efforts in terms of reducing crime in our city,” Dyer said at a news conference after the vote.

The final council vote came without contentious debate — or really any debate for that matter. Instead, councilmembers described their favorite spending items.

“This is a budget that delivers on a safe, clean and compassionate Fresno,” Councilman Tyler Maxwell said.

To Maxwell, that means spending $2.4 million on tree trimming and $6.2 million on parks in his district. The overall parks budget comes in at $108 million, boosted by $58 million in Measure P sales tax revenue — which is nearly $20 million more than previously estimated.

For Councilman Miguel Arias, it was money for housing, including the creation of a new department with 16 full-time positions. The city will spend $40 million on various housing projects, a Dyer priority. That is on top of $20 million already in the budget.

While Councilman Luis Chavez, highlighting spending on immigrant services, he spoke of the “R” word.

“The folks that predict a lot of challenges ahead are talking about a recession and a downturn. I just want to make sure we are prepared for that,” Chavez said. The city has squirrelled away $43 million in reserves.

The budget was initially estimated at $1.7 billion. The extra $200 million accounts for internal services — best described as the non-public facing portion of city staff (IT, personnel, etc.).

The budget includes $64 million in federal American Rescue Plan funds. Dyer said much of that money was allocated to one-time projects, acknowledging it may not be there in the city’s next budget cycle.

“It is important that we not be become addicted to that influx of dollars or money into our city, because I know that is a mistake that a lot of cities make,” he said.

Dyer credited City Manager Georgeanne White with crafting the budget. He quipped it is amazing she still has a voice after yelling so much. White said she can’t take a vacation quite yet. She needs a few more days to wrap up the spending plan.