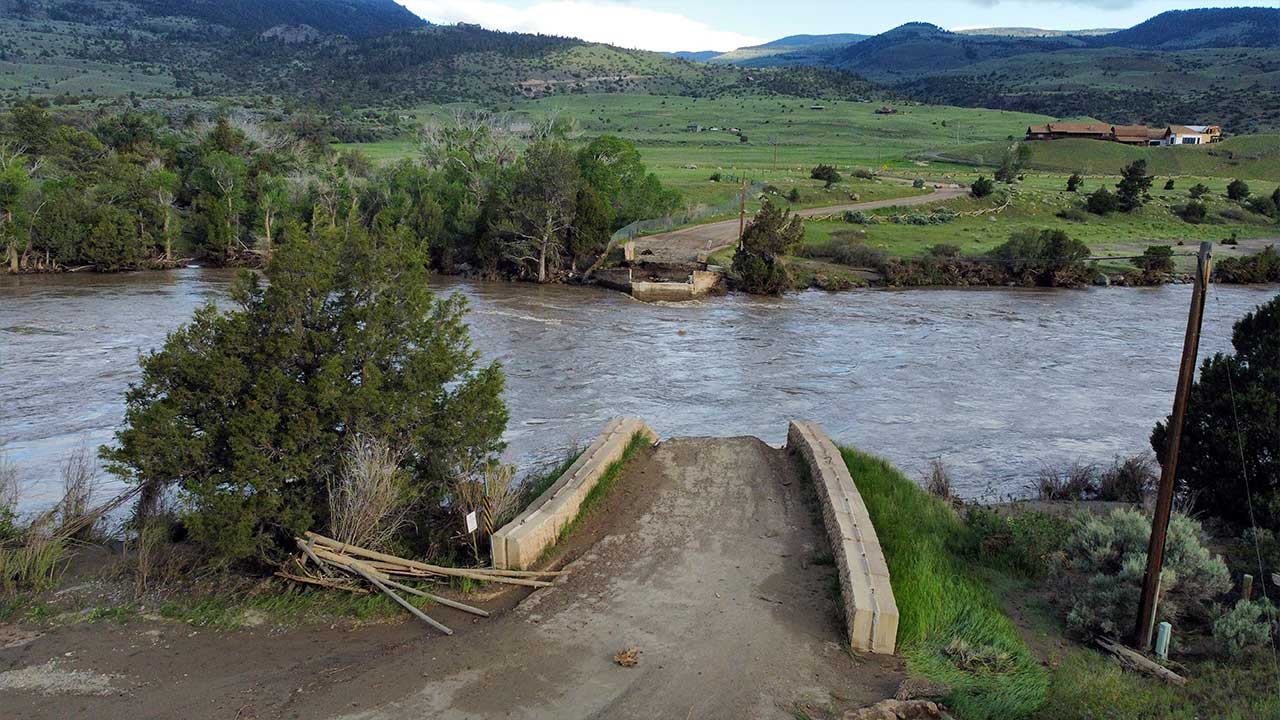 A bridge is washed out on the Yellowstone River Wednesday, June 15, 2022, near Gardiner, Montana. (AP/Rick Bowmer)
Share with friends

RED LODGE, Mont. — Floodwaters that rushed through Yellowstone National Park and surrounding communities earlier this week moved through Montana’s largest city on Wednesday, flooding farms and ranches and forcing the shutdown of its water treatment plant.

“The landscape literally and figuratively has changed dramatically in the last 36 hours.” — Bill Berg, a commissioner in Park County, Montana

The water in the Yellowstone River hit its highest level in nearly a century as it traveled east to Billings, Montana, home to nearly 110,000 people. It hit 16 feet, a foot higher than the water plant needs to work effectively.

The historic floodwaters raged through the nation’s oldest national park earlier this week and may have forever altered the human footprint on Yellowstone’s terrain and the communities that have grown around it.

The floodwaters tore out bridges and poured into nearby homes. They pushed a popular fishing river off course — possibly permanently — and may force roadways nearly torn away by torrents of water to be rebuilt in new places.

“The landscape literally and figuratively has changed dramatically in the last 36 hours,” said Bill Berg, a commissioner in nearby Park County. “A little bit ironic that this spectacular landscape was created by violent geologic and hydrologic events, and it’s just not very handy when it happens while we’re all here settled on it.”

Related Story: Why Is So Much Water Flowing in San Joaquin River If We’re in a Drought?

The unprecedented flooding drove more than 10,000 visitors out of park and damaged hundreds of homes in nearby communities, though remarkably no was reported hurt or killed. The only visitors left in the massive park straddling three states were a dozen campers still making their way out of the backcountry.

The park could remain closed as long as a week, and northern entrances may not reopen this summer, Superintendent Cam Sholly said.

“I’ve heard this is a 1,000-year event, whatever that means these days. They seem to be happening more and more frequently,” he said.

Sholly noted some weather forecasts include the possibility of additional flooding this weekend.

Days of rain and rapid snowmelt wrought havoc across parts of southern Montana and northern Wyoming, where it washed away cabins, swamped small towns, and knocked out power. It hit the park as a summer tourist season that draws millions of visitors was ramping up during its 150th anniversary year.

Trout Swimming in the Street

Businesses in hard-hit Gardiner had just started really recovering from the tourism contraction brought by the coronavirus pandemic, and were hoping for a good year, Berg said.

“It’s a Yellowstone town, and it lives and dies by tourism, and this is going to be a pretty big hit,” he said. “They’re looking to try to figure out how to hold things together.”

Some of the worst damage happened in the northern part of the park and Yellowstone’s gateway communities in southern Montana. National Park Service photos of northern Yellowstone showed a mudslide, washed-out bridges, and roads undercut by churning floodwaters of the Gardner and Lamar rivers.

In Red Lodge, a town of 2,100 that’s a popular jumping-off point for a scenic route into the Yellowstone high country, a creek running through town jumped its banks and swamped the main thoroughfare, leaving trout swimming in the street a day later under sunny skies.

Residents described a harrowing scene where the water went from a trickle to a torrent over just a few hours.

The water toppled telephone poles, knocked over fences, and carved deep fissures in the ground through a neighborhood of hundreds of houses. Electricity was restored by Tuesday, but there was still no running water in the affected neighborhood.

While the flooding hasn’t been directly attributed to climate change, Rick Thoman, a climate specialist at the University of Alaska Fairbanks, said a warming environment makes extreme weather events more likely than they would have been “without the warming that human activity has caused.”

“Will Yellowstone have a repeat of this in five or even 50 years? Maybe not, but somewhere will have something equivalent or even more extreme,” he said.

Heavy rain on top of melting mountain snow pushed the Yellowstone, Stillwater, and Clarks Fork rivers to record levels Monday and triggered rock and mudslides, according to the National Weather Service. The Yellowstone River at Corwin Springs topped a record set in 1918.