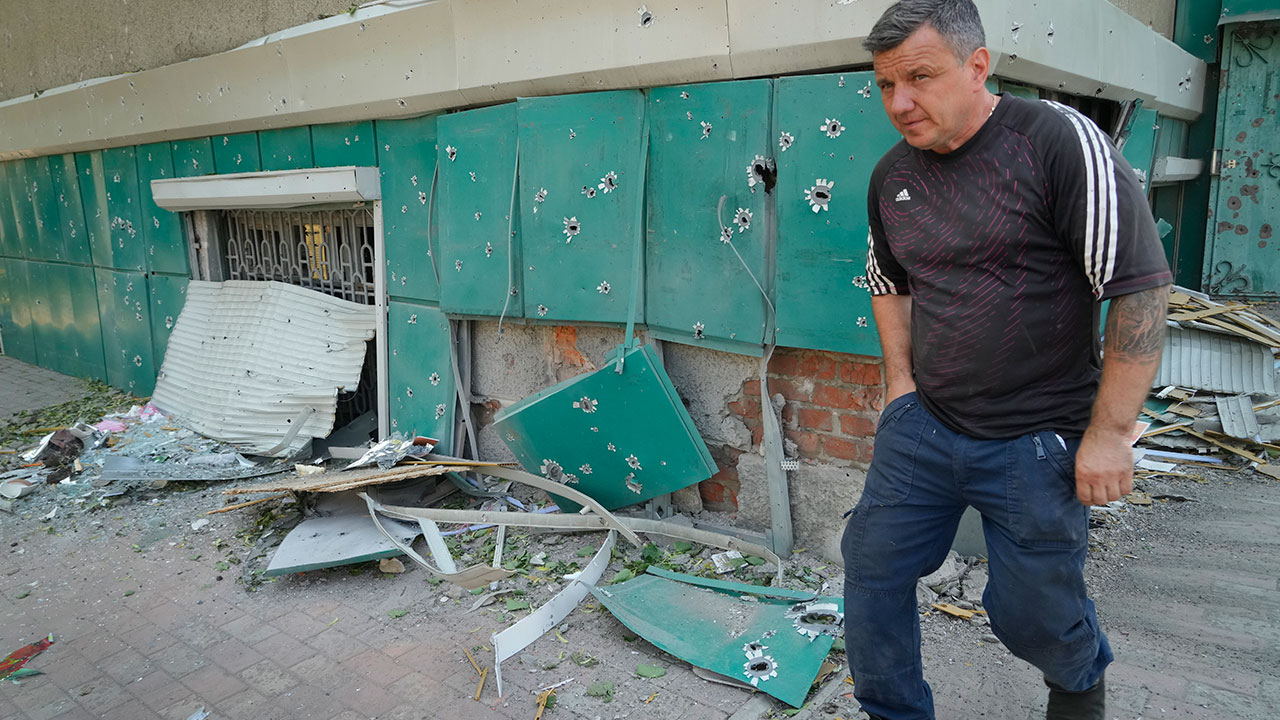 LVIV, Ukraine — Russian troops control about 80% of the fiercely contested eastern Ukrainian city of Sieverodonetsk and have destroyed all three bridges leading out of it but Ukrainian authorities are still trying to evacuate the wounded, a regional official said Tuesday.

Serhiy Haidai, governor of the eastern Luhansk region, acknowledged that a mass evacuation of civilians from Sieverodonetsk now is “simply not possible” due to the relentless shelling and fighting in the city. Ukrainian forces have been pushed to the industrial outskirts of the city because of “the scorched earth method and heavy artillery the Russians are using,” he said.

“There is still an opportunity for the evacuation of the wounded, communication with the Ukrainian military and local residents,” he told The Associated Press by telephone, adding that Russian forces have not yet blocked off the strategic city.

About 12,000 people remain in Sievierodonetsk compared to its pre-war population of 100,000. More than 500 civilians are sheltering in the Azot chemical plant, which is being relentlessly pounded by the Russians, according to Haidai.

In all, 70 civilians were evacuated from the Luhansk region in the last day, the governor said.

Related Story: Will Battle of the Donbas Decide the Ukraine War?

A Russian general, meanwhile, says a humanitarian corridor will be opened Wednesday to evacuate civilians from the besieged Azot chemical plant in Sievierodonetsk. Col-Gen. Mikhail Mizintsev said evacuees would be taken to the town of Svatovo 35 miles to the north in territory under the control of Russian and separatist forces.

He said the plan was made after Ukraine called for establishing an evacuation corridor leading to Ukrainian-controlled territory.

Mizintsev, head of the National Defense Management Center, is accused by Ukraine of human rights violations while commanding troops during the long siege of Mariupol, Ukraine’s key port on the Sea of Azov that has been taken over by the Russians.

Russian forces in the last few weeks have pressed hard to capture Ukraine’s eastern industrial Donbas area, which borders Russia and is made up of the regions of Luhansk and Donetsk.

“The situation is difficult,” Ukrainian President Volodymyr Zelenskyy said in a news conference Tuesday with Danish media. “Our task is to fight back.”

Jan Egeland, the Secretary-General of the Norwegian Refugee Council, one of the aid organizations supplying food to the people in the Donbas, said fighting in the past few weeks has made regular food distributions impossible.

Now, he said, the remaining civilians in the city “are almost entirely cut off from aid supplies after the destruction of the last bridge.”

— Ukrainians use humor to cope with the trauma of war

— German leader is coy about plans to visit Ukraine

There was no independent confirmation and it was not clear if any missiles hit their targets. Odesa is a key western port for Ukraine on the Black Sea.

Reports of overnight shelling came from other Ukrainian regions as well, with five people wounded in the northeastern Kharkiv region. According to an intelligence update Tuesday by the U.K. Defense Ministry, Russian forces appear to have made small advances in the Kharkiv sector for the first time in several weeks.

Pope Francis has blasted the “ferocity and cruelty” of Russian troops in Ukraine while praising the “heroism” and “courage” of Ukrainians defending their land.

Francis made some of his most pointed comments about the war in a meeting with European editors of Jesuit journals last month, excerpts of which were published Tuesday in Italian dailies La Stampa and Avvenire.

While sharply criticizing Russia’s invasion, Francis also insisted there weren’t “good guys and bad guys” and that Russia was in some ways provoked by NATO’s expansion east.

“Someone might say at this point: ‘But you are in favor of Putin!’ No, I’m not,” Francis said. “It would be simplistic and wrong to say such a thing. I am simply against reducing complexity to the distinction between good and bad, without thinking about roots and interests, which are very complex.”

At the same time, Francis praised the courage of Ukrainians and reasserted their right to defend themselves while blasting what he said was the financial interest in the war by weapons manufacturers to “test and sell weapons.”

“It’s true the Russians thought it’d be over in a week. But they miscalculated,” Francis said. “They found a courageous people, a people who are fighting to survive and have a history of fighting.”

Paleontologist Breaks Down What ‘Jurassic World’ Dinosaurs Were Really Like