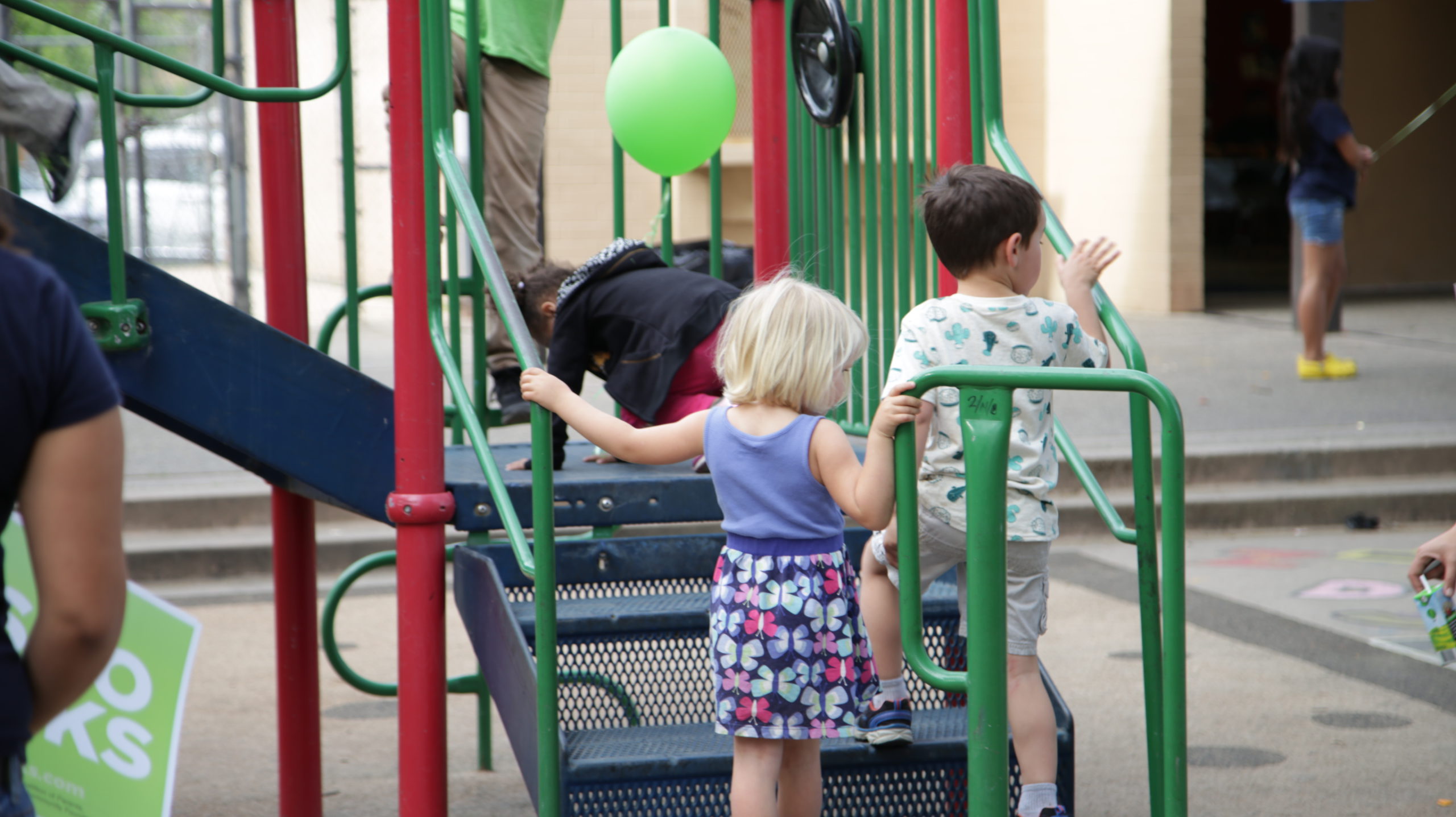 Fresno residents are voicing their ideas about what they want to see in their parks.

And, thanks to parks sales tax monies swollen by the Amazon distribution center, the city should have enough funding (nearly $75 million this year alone) to make almost every resident’s park dream come true — if not this year, then in the years ahead.

However, how soon residents’ wishes come to fruition could conflict with the desires of Mayor Jerry Dyer’s administration and those of the Fresno City Council. These tensions already are surfacing at meetings of the Fresno Parks, Arts and Recreation Commission.

Last week’s commission workshop on the 2022-23 budget provided an example.

Jaspoor Phangura, a resident of Fresno and a member of the Fresno cricket club, says he often travels to San Francisco on weekends to play because there aren’t any cricket fields nearby.

“Cricket grounds should be available in Fresno so people like me don’t have to travel hundreds of miles to play sports,” said Phangura. “The city should be investing more resources into growing sports.”

In addition to the sports courts and fields requested, residents want a budget process that allows them to vote on how Measure P sales tax funds are used.

Others wanted funding for more cooling and warming centers during the summer and winter months.

But Sally Louis, who lives in District 1, spoke out against the pocket park announced for Van Ness Boulevard and Weldon Avenue near Fresno High School.

Instead, Louis advocated for grants for residents to put in drought-tolerant yards, saying that it would be a smart way to address the drought.

“The proposed park at Van Ness and Weldon is not necessary,” Louis said. “I’ve seen homeless people laying on the grass there now, and it’s not what we need.

“Instead of putting in a park, I think the city should use the windfall from Measure P tax dollars to offer grants to residents of District 1 to install drought-tolerant yards. … This would be helpful for many.”

For years, Fresno received low ratings for its lack of parks and other green spaces. Community frustration with the situation led to Measure P.

But, with Measure P —  a 3/8% sales tax for 30 years — going into effect last year, the expectation is that Fresno’s parks system will not just improve but become a model for other communities. 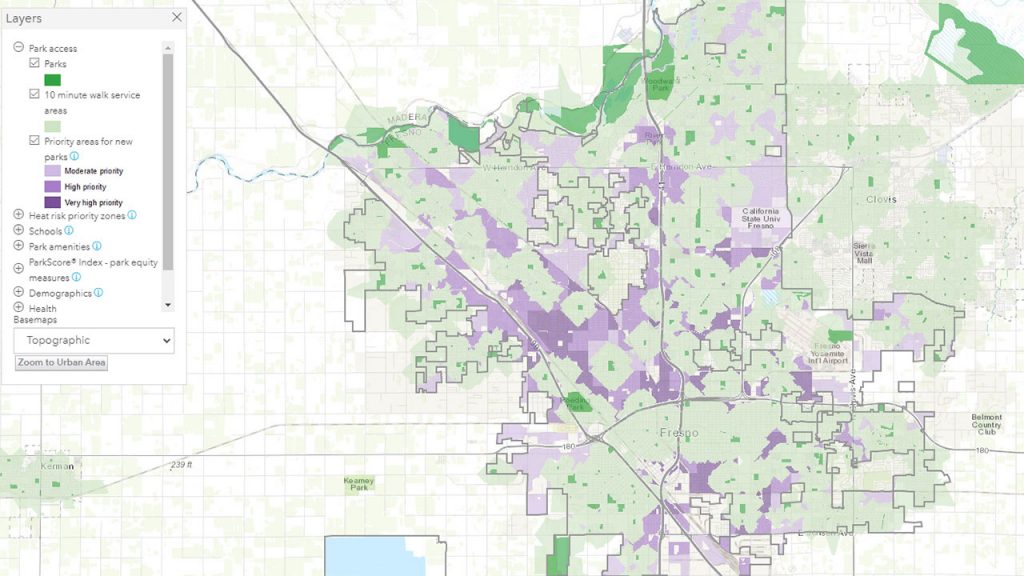 Purple areas on the map outline the Fresno neighborhoods in the most need of nearby parks. (Trust for Public Land)

Jose Leon Barraza, the parks commissioner for District 5, is a longtime advocate for new parks and green spaces.

“I think it takes time, but I think that now with Measure P a lot more things are possible,” said Leon-Barraza.

While Measure P was expected to produce about $35 million to $38 million annually, it is projected to generate a little over $58 million this year. The city also has close to $16.5 million in Measure P carry-over monies from last year, as well as parks-eligible funding from federal pandemic relief funds.

Where Are Measure P Funds Going?

Measure P funds for fiscal year 2023 have already been spoken for. The major initiatives include improving neighborhood parks and playgrounds, new parks and recreation facilities, expanded access to cultural arts, walking and biking trails, and street beautification and litter removal.

Since January, the parks department has added dozens of workers who are focused on irrigating green spaces and maintaining trails and parks. 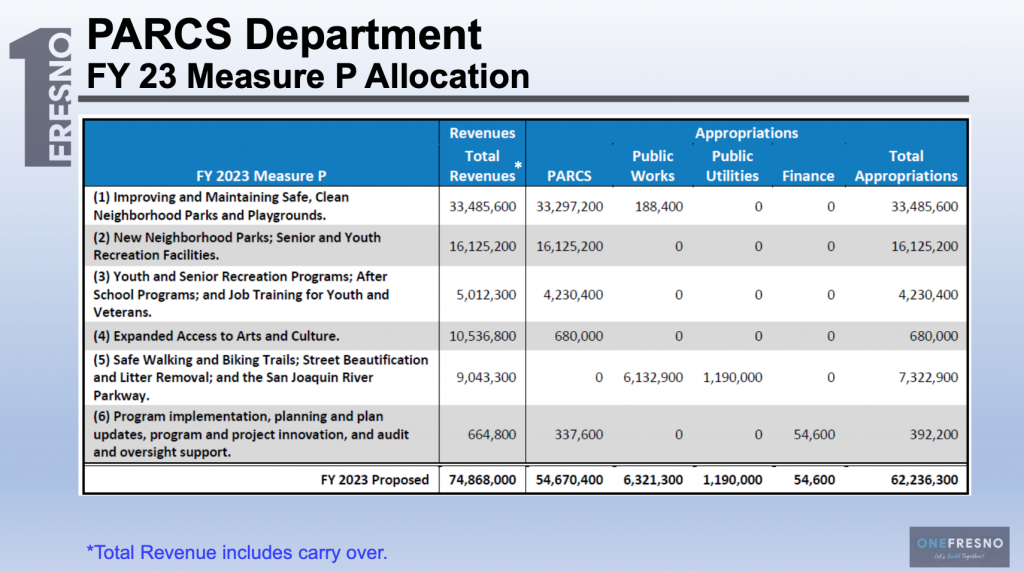