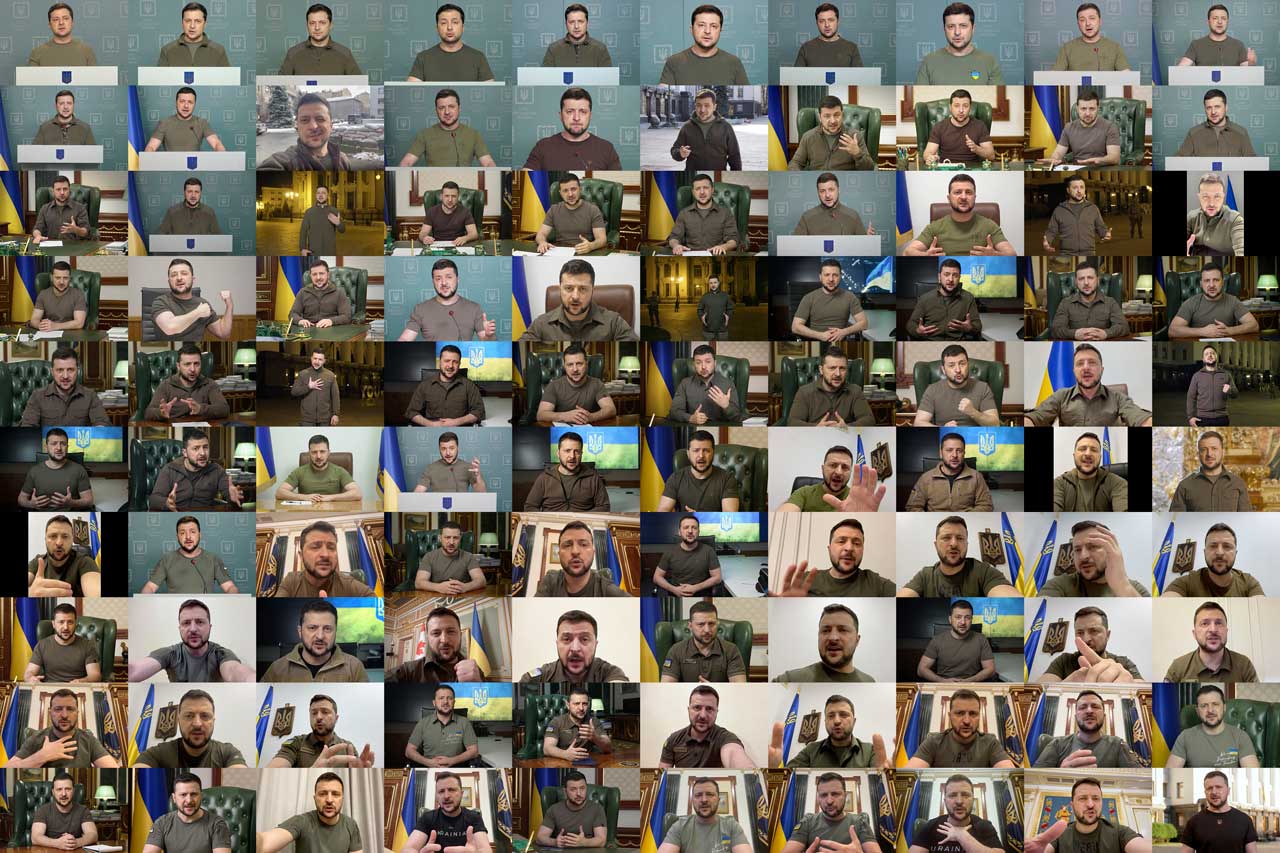 As Ukrainian President Volodymyr Zelenskyy tells it, when Russia invaded 100 days ago, no one expected his country to survive. World leaders advised him to flee.

The Russians “didn’t know how brave Ukrainians are, how much we value freedom.” — Ukrainian President Volodymyr Zelenskyy

He could have been speaking about himself. No one knew how a 44-year-old man who had catapulted himself from the world of entertainment into the presidency would respond to an invasion by Russia’s giant army.

His response has been forceful — and compellingly public. Zelenskyy has led his country in mounting an unexpectedly fierce resistance. Every night, he rallies Ukrainians to the fight with a video address on social media. There have been 100 so far – one for each day of the war — in nightly reminders that he has not fled, that Ukraine has indeed survived.

Related Story: EXPLAINER: At 100 Days, Russia-Ukraine War by the Numbers

Fresh From the Fight, Ready to Get Back to It

His actor-trained voice can be soothing, a deep, confidential almost-whisper as he looks directly into the camera. Or forceful, rising in moral outrage as he condemns the most recent Russian atrocities and insists that those responsible will be punished.

As the days and weeks have ticked by, his unshaven face has grown a dark beard. He has lost his boyish looks. The puffiness from sleepless nights as Russian troops marched on the capital was replaced by new resolve when the invasion stalled.

From the start of the war, he has dressed in various shades of army green, appearing most often in a simple T-shirt. The impression he leaves is clear: He’s fresh from the fight and about to get back to it.

A tireless and skilled communicator, Zelenskyy has spoken by video link to the United Nations, British Parliament, U.S. Congress, and about two dozen other parliaments around the world, as well as to the Cannes Film Festival and America’s Grammy Awards. Rarely if ever has a man without a tie addressed so many VIPs. He also has given interviews to journalists. He held a news conference in the safety of the Kyiv subway.

‘The Free People of a Brave Country’

But his nightly video address has been his favored channel for informing and inspiring his fellow citizens.

He often begins with an exuberant greeting to Ukrainians as “the free people of a brave country” or “the invincible people of our great country.” He invariably ends with a defiant “Glory to Ukraine.”

He tells them of the world leaders he has spoken with during the day and his efforts to get those leaders to send more and better weapons, to inflict ever more punishing sanctions on Russia.

He speaks to his fellow Ukrainians’ anger and pain from the devastation of the country, the untold deaths. “My heart breaks from what Russia is doing to our people,” he said on March 16 after Russian bombs killed hundreds sheltering in a theater in Mariupol.

He salutes their courage and says he never gets tired of thanking all those fighting to determine the future of Ukraine. That the country did not fall within days as Russia expected, he said on April 14, was because millions of Ukrainians “made the most important decision of their life – to fight.”

Related Story: Putin’s Hard Choices: Why Russia’s Despot Can Neither Mobilize Nor ...

He also has tried to reach a Russian audience, as on April 1 when he switched from Ukrainian into Russian to urge Russians to keep their sons away from the war.

“We do not need new dead people here,” he said. “Take care of your children so they do not become villains, do not send them to the army. Do whatever you can to keep them alive. At home.”

In his video address Friday on the war’s 100th day, Zelenskyy said many words and numbers are now associated with the war, but “there are three words for which we have been fighting for 100 days after eight years: ‘peace,’ ‘victory,’ ‘Ukraine.’ Glory to Ukraine!”

In justifying the Feb. 24 invasion, Russian President Vladimir Putin said he was saving Ukraine from the “drug addicts and neo-Nazis” of Zelenskyy’s government. He has since ignored Zelenskyy’s calls for a meeting.

Back in June 2019, shortly after Zelenskyy was elected president, Putin was asked why he hadn’t congratulated the new Ukrainian leader. In a condescending response, Putin seemed to write off the actor-turned-president.

“Well, it’s one thing to play someone and another to be someone,” Putin said. “The important thing is to have the courage and the character to take responsibility. He hasn’t shown his character yet.”

For 100 nights, that character has been shown to Ukrainians and the world. And to Putin.