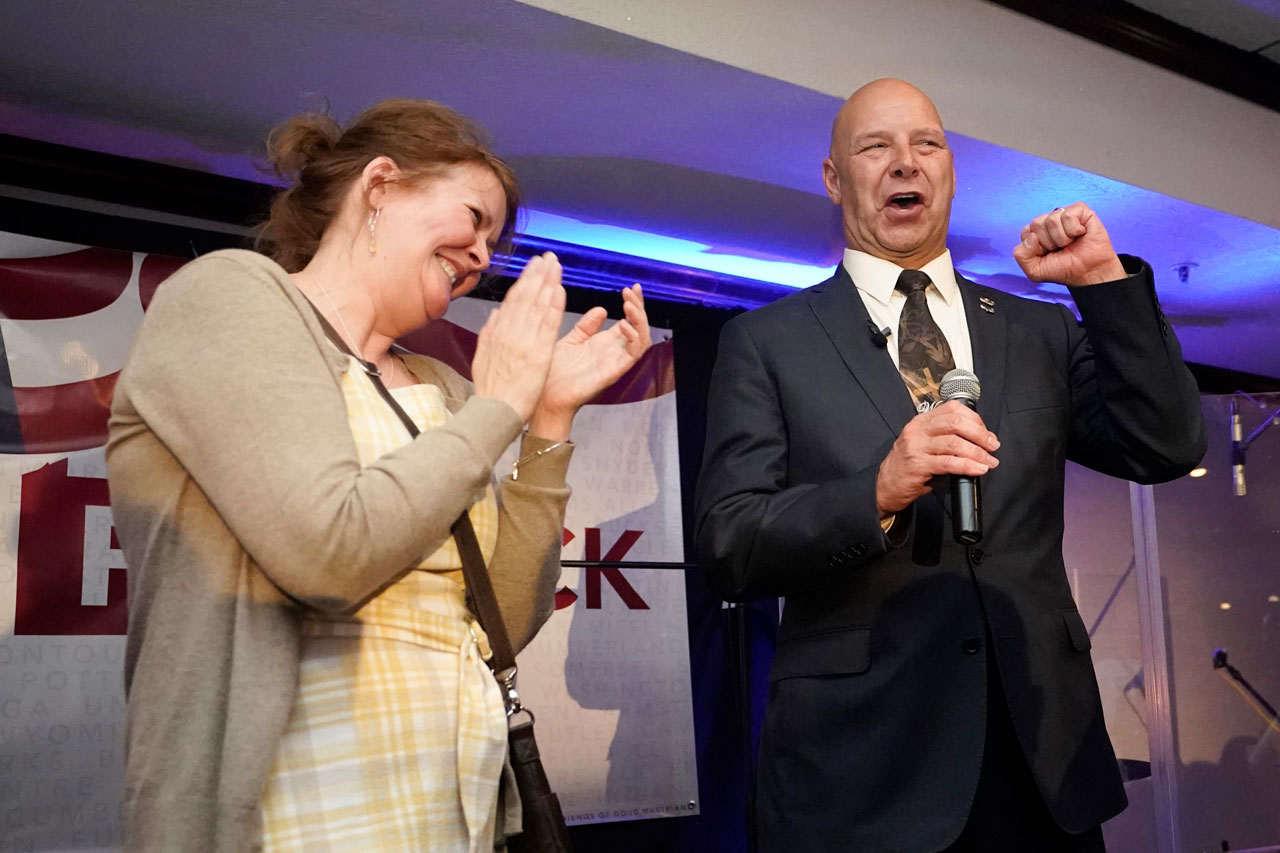 WASHINGTON — Former President Donald Trump’s influence was enough to elevate his Senate candidate to victory in North Carolina on Tuesday, while his pick in Pennsylvania remained in a tough fight in that state’s Senate primary.

In a key congressional race, a Republican congressman’s bad behavior finally caught up with him.

And in the Pennsylvania governor’s race, a Trump-backed candidate who has spread lies about the 2020 vote count won the GOP nomination, putting an election denier within striking distance of running a presidential battleground state in 2024.

Here are the takeaways from Tuesday’s primaries in Pennsylvania, North Carolina, Kentucky, Idaho, and Oregon:

The former president entered the primary season on a high after JD Vance, his endorsed candidate in Ohio’s hypercompetitive GOP Senate contest, shot from third to first. Trump added to his tally Tuesday night in several states.

And in Pennsylvania’s GOP race for governor, Trump’s endorsed candidate, the far-right Doug Mastriano, easily won the nomination — though he was already well ahead in the polls when Trump weighed in just days before the primary.

His nod was widely seen as an effort to hedge his bets and guarantee a victory in the state in case his endorsed candidate for Senate, celebrity heart surgeon Mehmet Oz, loses his race. Oz and former hedge fund CEO David McCormick were virtually tied late Tuesday, with more votes left to be counted.

Trump had suffered a loss last week when Charles Herbster, his endorsed candidate in Nebraska’s gubernatorial primary, finished second after being accused late in the campaign of groping young women. Trump is facing down another possible defeat in next week’s high-stakes governor’s primary in Georgia, where his candidate is trailing in both polls and fundraising.

Trump has made election denial a key loyalty test in the Republican Party, and that may have kneecapped his party in Pennsylvania with the victory of Mastriano, a vocal election denier.

Mastriano backed baseless reviews of the election results in Pennsylvania, where Democrat Joe Biden won by nearly 100,000 votes. He organized buses to ferry Trump supporters to Washington for the “Stop the Steal” rally that preceded the Jan. 6 U.S. Capitol insurrection. And he says that if he’s elected, he’ll ferret out fraud partly by making every single voter in the state reregister.

Mastriano was the front-runner even before Trump’s endorsement late last week helped cement his victory. All the major statewide Republican hopefuls in one way or another cast doubt on the election results, but Mastriano was by far the loudest and that’s what won him Trump’s nod.

With Trump prioritizing fealty to his election lies over all else, many Pennsylvania Republicans fear the former president has undermined their chances in the crucial state. That led them to try to coalesce around a last-minute alternative to Mastriano, but the effort failed.

Mastriano will face Democrat Josh Shapiro, the state’s attorney general, in the November general election. Shapiro, who was uncontested, has appeared eager to take on Mastriano, running a television ad calling Mastriano “one of Donald Trump’s biggest supporters,” a move that seemed designed to boost the state senator with GOP voters.

In conservative Idaho, Phil McGrane, an establishment-backed Republican, just narrowly defeated an election denialist in their primary for secretary of state. The three-person race included two candidates who endorse Trump’s election lies — combined, they won over 55% of the vote. That shows the hold that Trump’s election lies have on his party. 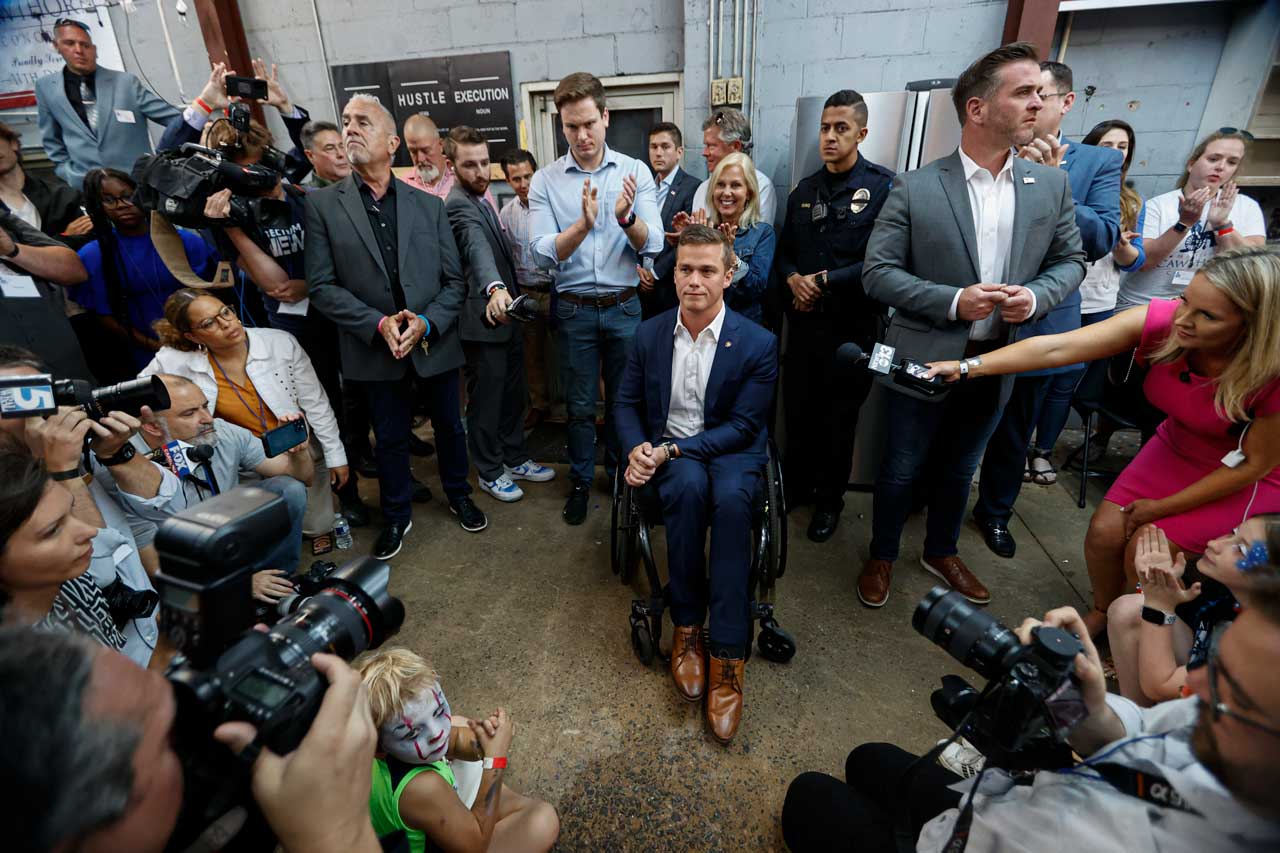 U.S. Rep. Madison Cawthorn, R-N.C., is surrounded by media as he speaks to supporters at his primary election night watch party in Hendersonville, N.C., Tuesday, May 17, 2022. (AP/Nell Redmond)

GOP Voters Had Enough of Cawthorn

Even in Trump’s Republican Party, there are limits.

Rep. Madison Cawthorn, the youngest member of Congress, was ousted from office on Tuesday by state Sen. Chuck Edwards after a rocky first term filled with salacious headlines and scandals. The young congressman, who uses a wheelchair after a car accident, became a media sensation when he first won a House seat at age 25, but he may have gotten singed under the spotlight.

Trump sought to give Cawthorn a boost on Monday, urging voters to keep him in office. “Recently, he made some foolish mistakes, which I don’t believe he’ll make again,” Trump said in a statement. “Let’s give Madison a second chance!”

But voters decided not to. Edwards, who was endorsed by Republican Sen. Thom Tillis, inched past Cawthorn in the primary. Still, the big picture wasn’t that close — with eight candidates in the contest, Cawthorn won just 3 in 10 voters in the district. That’s a warning for other Republicans who may feel that Trump’s ability to hold his base’s loyalty through repeated scandals makes them bulletproof, too.