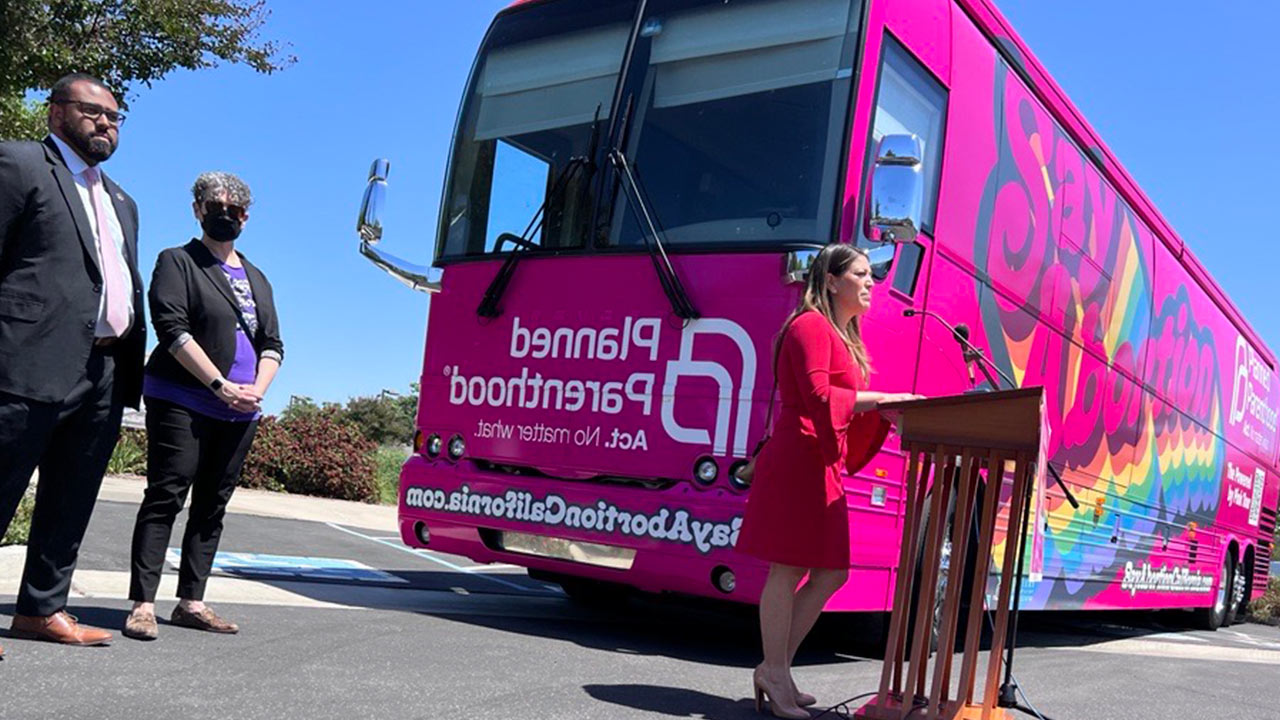 Fresno City Council members joined Planned Parenthood officials and a faith leader on Tuesday in northeast Fresno to urge the community’s continued support for reproductive rights and access to abortions.

The “Powered by Pink” bus tour, which kicked off in Sacramento on Saturday, made its first official stop for a news conference at the Unitarian Universalist Church in Fresno and will wind up in Long Beach, where a pro-choice rally is planned on May 25.

Planned Parenthood officials are using the tour to talk about what the organization is doing in anticipation of the Supreme Court’s expected decision, based on a leaked draft opinion, to overturn Roe v. Wade, an earlier Supreme Court decision that legalized abortion throughout the nation nearly 50 years ago.

Once the opinion is issued, it’s likely that women in 26 states will lose access to abortion services in their home state, said Stacy Cross, president of the Planned Parenthood Mar Monte affiliate. The women who will be most affected are low-income people of color, she said.

Mar Monte, Planned Parenthood’s largest affiliate with sites in California and Nevada, is not waiting for the high court to issue its decision, Cross said. The organization is expanding, with a new clinic being built in Reno near the airport and expansions planned at other sites. In addition, the organization is actively recruiting and training more medical personnel to provide abortion services, she said.

Preparing for Influx of Patients

Cross, who described herself as unsurprised but “disgusted and saddened and angered” when the draft opinion was leaked recently, said Planned Parenthood is expecting an additional 250 to 500 patients each week coming from out of state.

“Our doors are going to continue to be open,” she said.

In addition to abortion, Planned Parenthood provides other health services that includes “gender-affirming” care as well as care for gay, lesbian, and trans patients, Cross said.

“And all that is at risk,” she said. “Everything that I’ve worked my whole life for is at risk with this Supreme Court because they’re taking rights away and they’re impacting democracy.”

Rabbi Laura Novak Winer said she was representing other Fresno-area faith leaders who weren’t in attendance Tuesday but who support a women’s right to choose whether to have an abortion.

Novak Winer was wearing a purple T-shirt that read “Rabbis for Choice.”

“I’ve had this T-shirt for more than 30 years,” she said. “It’s standing with Planned Parenthood, making this choice, standing and making this fight with them and with my brothers and sisters and siblings in faith who believe that it is an individual’s choice to make decisions about the kind of medical and health care that they have.”

Soria thanked the Planned Parenthood organizers for emphasizing the importance of reproductive rights in the weeks leading up to the June primary election.

“Thank you, everyone, for the work that you’re doing today and over the last few weeks,” she said. “We’re reminded that elections have consequences and that as we come close to the primary election, that we take note of those that stand with us, supporting our fundamental rights to privacy and our fundamental rights to have safe access to health care when making tough decisions.”

Council President Nelson Esparza noted the council’s support for women, including the creation in April of the Fresno Women’s Commission, which will serve as an advisory body to the council on issues concerning women and girls. He said that women interested in serving on the commission can apply at council offices. Each district will have one representative.

Now is the time for supporters of abortion and reproductive rights to have their voices heard, Esparza said.

“We need to stand up like previous generations stood up, so that we can have a world where lifesaving health care like the … services that Planned Parenthood provides are not constantly under attack,” he said. “So ultimately, now is the time to do that.”