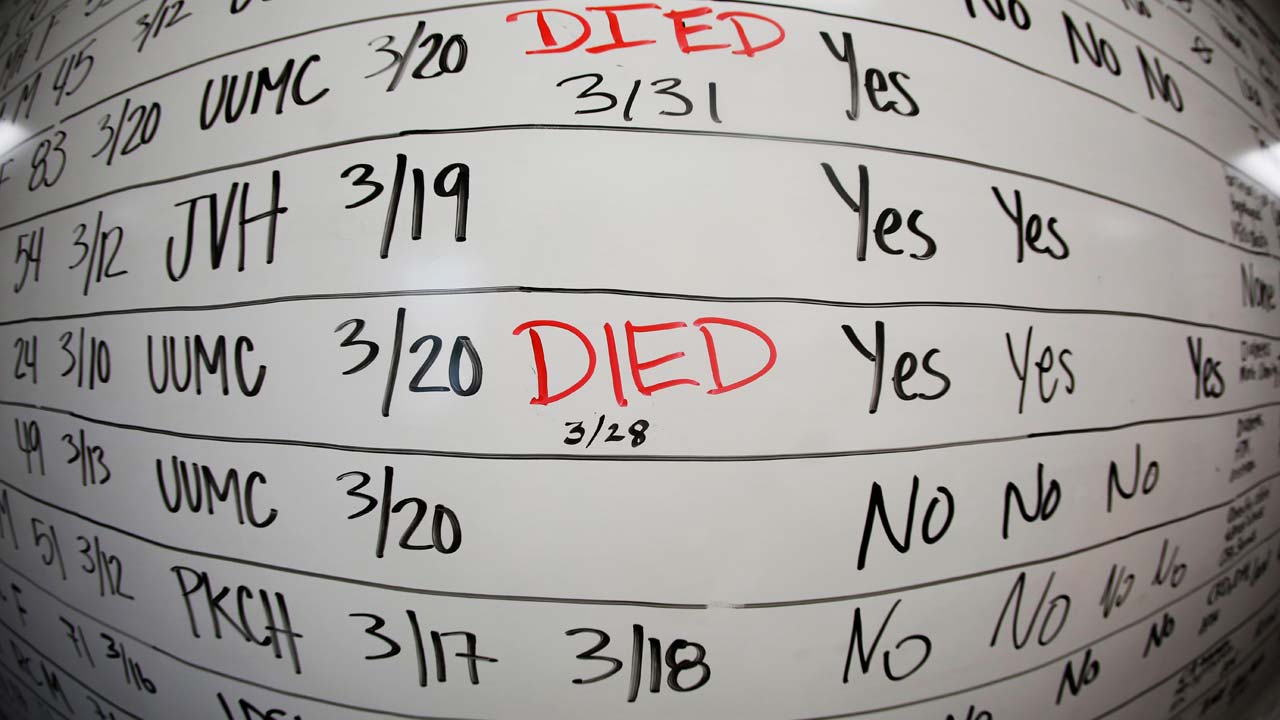 A list of the confirmed COVID-19 cases in Salt Lake County early in the coronavirus pandemic. (AP File Photo/Rick Bowmer)
Share with friends

When the U.S. hit 1 million COVID-19 deaths on Monday, the news was driven by a government tally derived from death certificates.

But that’s not the only tally. And you may be wondering, where do these numbers come from? A look behind the data:

Deaths certificates have long been considered the most comprehensive record of deaths and their causes. The Centers for Disease Control and Prevention systematically collects information from all 50 states to track fatalities from all causes, including cancer, drug overdoses and now COVID-19.

But early in the pandemic, officials recognized the COVID-19 data was sluggish and incomplete.

Testing was often unavailable. In some places — especially rural ones — coroners or medical examiners did not have the staff to ask about coronavirus symptoms when people died at home. Even when information was available, overworked doctors could be slow to do the death certificate paperwork.

With information on death certificates slow to arrive, experts and news organizations began looking to other real-time sources of deaths.

They turned to state health department tallies derived from preliminary reports that were mainly of people diagnosed with COVID-19 who went to a hospital and died. Such data was more timely than death certificates, which can take weeks to fill out and process.

Other organizations have their own counts, including NBC News, which two weeks ago reported that the U.S. had surpassed 1 million COVID-19 deaths, but did not explain in its story how it arrived at that figure.

Last week, federal officials issued statements about the nation hitting 1 million deaths, even though the U.S. government’s own data had yet to show it. Based on lags in the reporting of death certificate information, officials concluded it was likely the milestone had passed and that it was appropriate to remark on it.

HOW THE TALLIES HAVE CHANGED

As the pandemic dragged on, many states cut back on posting case and death numbers — some to just once a week.

“We’ve lost a lot of immediacy in our reporting.” Emily Pond, a Johns Hopkins research data analyst, said in an email.

At the same time, the numbers based on death certificates rose faster. One reason: Investigators have been going back and adding several thousand deaths in which COVID-19 was not named initially but was identified later after autopsies or other medical investigations, said Robert Anderson, who oversees death data for the CDC’s National Center for Health Statistics.

Most of those deaths happened early in the pandemic, when COVID-19 was still new and underdiagnosed. Anderson said many were relabeled last year, largely in response to a Federal Emergency Management Agency program that began providing funeral assistance for families who could produce a death certificate attributing a death to COVID-19.

As of Monday morning, the Johns Hopkins data portal counted 999,607 deaths. The CDC count based on death certificates was 1,000,292.

At least 900,000 of the death certificates included in the CDC tally list COVID-19 as the primary cause of death, the agency said. The others list it as a contributing cause.

Some experts believe even the current death certificate-based data is an undercount. But it’s the best available, said Andrew Stokes, a Boston University researcher.