Fleeing War in Their Homeland, Ukrainians Find Refuge with Help from Fresno Volunteers 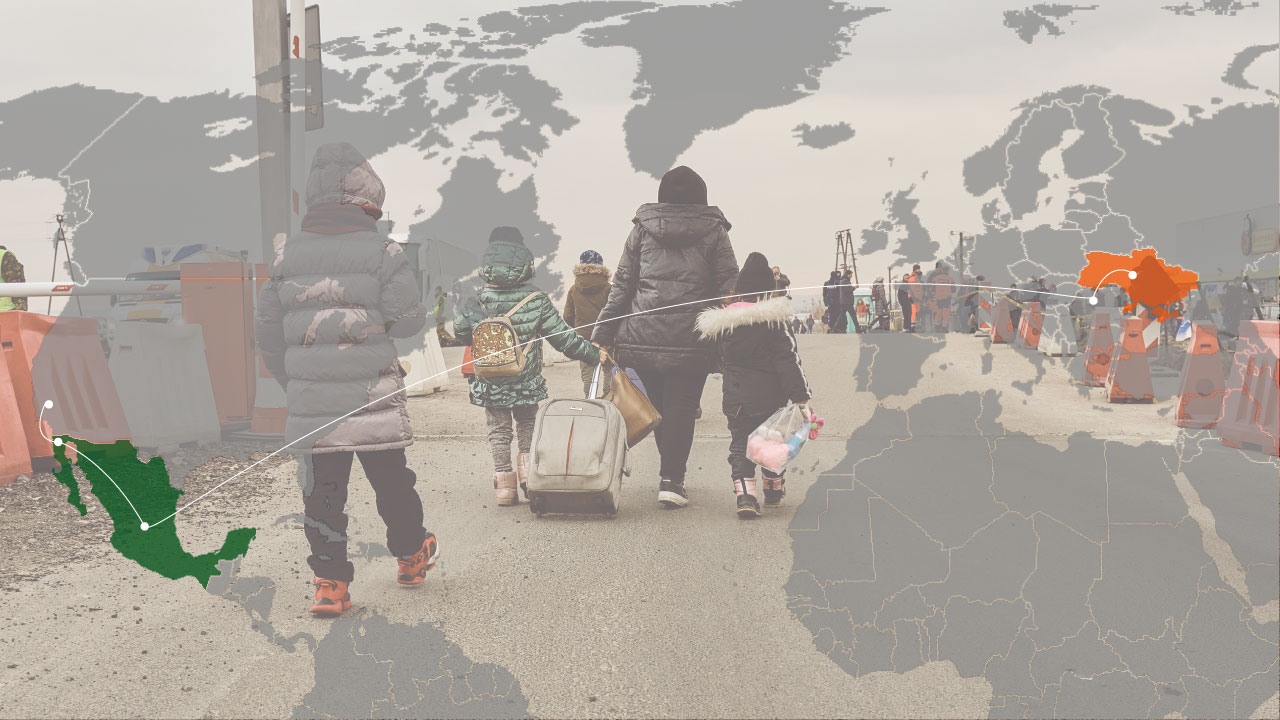 Mykhailo Kozariuk was working as a seasonal mushroom picker in England when war broke out in Ukraine, his homeland.

His mother, sister, and two nieces were still in southern Ukraine near Odesa but were preparing to flee across the border into Romania.

Half a world away, Boris Nebyshinets and George Karavan were working at their jobs, Nebyshinets as a mobile mechanic and Karavan as a mechanical engineer. Their families had emigrated to the U.S. in the late 1980s as Christian refugees who had suffered religious persecution under the Soviet government.

They all met for the first time in Tijuana, where Kozariuk and his family were among tens of thousands of Ukrainian refugees seeking admission to the U.S. at the southern border.

The Ukrainians were drawn there through social media blogs that said a transit through Mexico might yield them humanitarian entry to the U.S. as refugees.

Nebyshinets and Karavan, members of California’s Slavic community, had come to Tijuana to provide whatever aid they could to people in need.

And they found much need.

The first Ukrainians to arrive wound up standing in line for as long as three or four days waiting to reach and cross the border, Nebyshinets said last week during a visit to GV Wire’s office in northwest Fresno. There were no bathrooms, no safe places for children, no places to sleep.

A social media blogger advised Ukranians who had the money to buy a car and drive themselves across the border, where they would be put in detention while their refugee status was reviewed. Others sought to hire Mexicans to drive them across, but some were driven out into the desert, stripped of their valuables, and abandoned, he said.

Nebyshinets said he has some familiarity with Baja, California since he regularly helps out at a Mexican orphanage his church supports.

He and Karavan are longtime friends, and they decided to gather resources and other volunteers and head south.

Nebyshinets said he contacted his church, Gethsemane Slavic Baptist Church in northeast Fresno, and put the word out to the Slavic community. One friend alerted his boss at Granville Homes, who provided some funding to help the volunteers cover the costs of their volunteer work, which included providing temporary housing, food, and other assistance to the refugees. (Granville Homes is the parent company of GV Wire.) 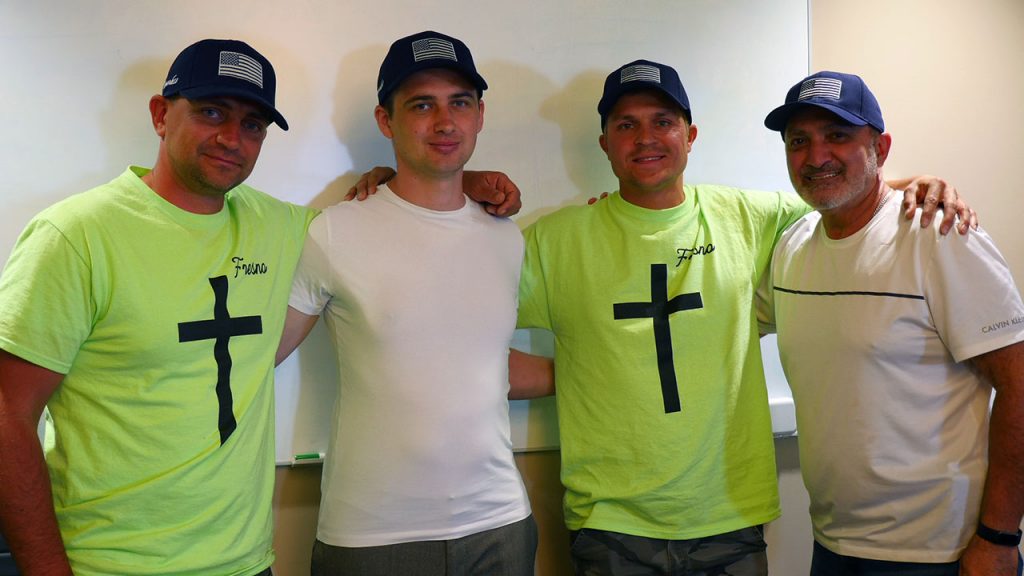 The volunteers bought as many sleeping bags and tents as they could find and took them to Tijuana, so that the refugees waiting to enter the U.S. could have safe places to sleep. When the tent city drew media attention, the Mexican and U.S. governments arranged for a site where the refugees could be housed, fed, and assigned numbers. 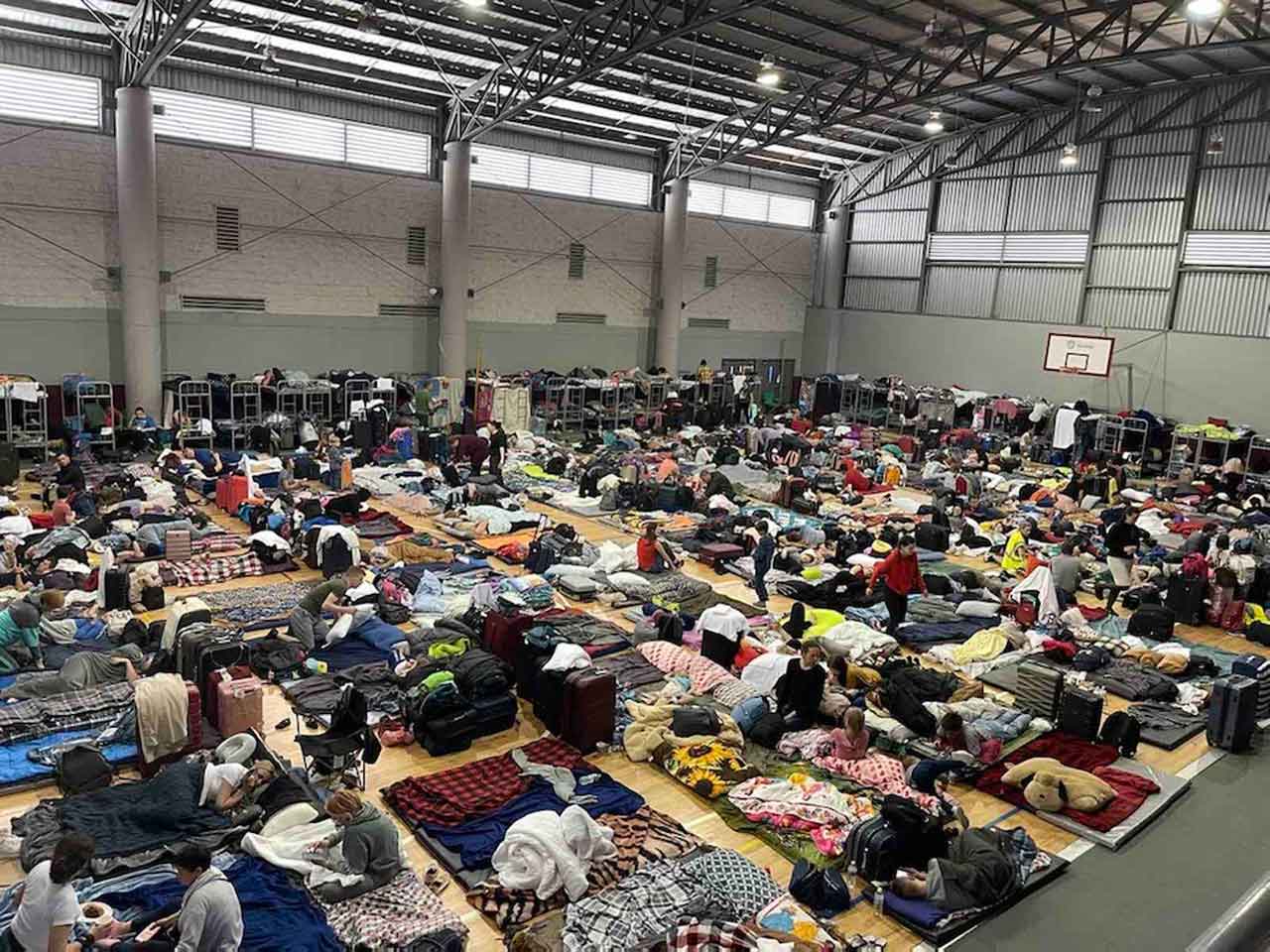 “The hub,” a site in Tijuana where Ukrainian refugees crowded while waiting to enter the U.S. (Boris Nebyshinets)

Volunteers worked to streamline the flow of refugees, picking them up at the airport and taking them to a place Nebyshinets referred to as the “hub,” where the refugees were assigned numbers and helped with paperwork, as well as given a place to rest and food.

But “the hub” was soon over its capacity, with as many as 3,000 crowding into a space that was supposed to hold 500, he said. So some refugees wound up in sleeping bags at the airport. 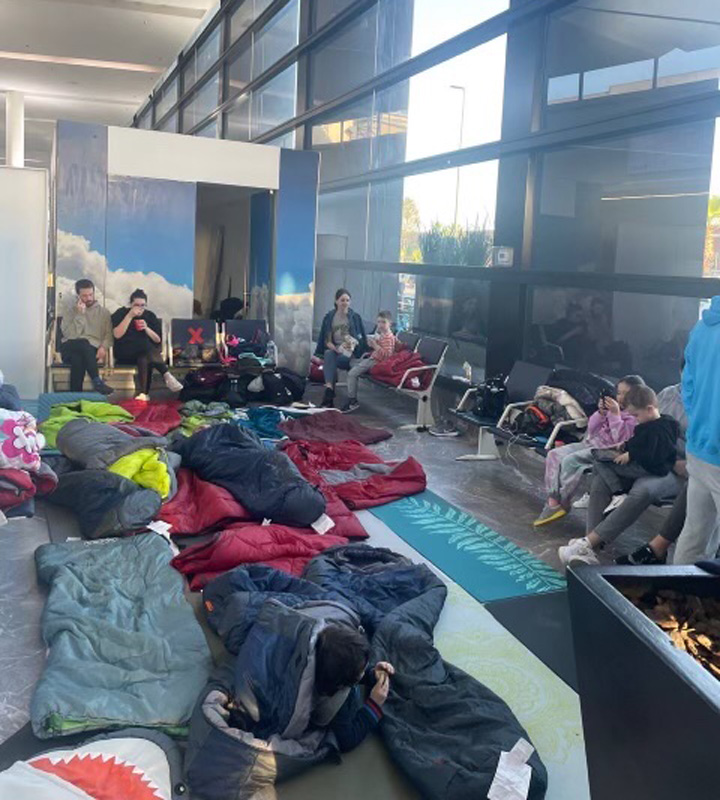 Ukrainian refugees wound up in sleeping bags at the Tijuana airport. (Boris Nebyshinets)

Meanwhile, Kozariuk, 32, was trying to reunite with his mother and sister. He had only been in England for two days when the war broke out, and he and his family made arrangements to meet in Romania, Ukraine’s southwest neighbor. But they were on their own, with no family or friends to help them, Kozariuk said in Russian as Karavan interpreted.

There was a great deal of uncertainty, and it was unclear exactly how close the Russian soldiers were, Kozariuk said. “There were no clear lines of the front where the war was happening, where the soldiers were coming in, and they had deployments of Russian soldiers and nobody knew where they were located because it’s hard to tell from the Slavic community who’s who,” he said in Russian.

Kozariuk said he and his family were only about 30 kilometers (18.6 miles) away from the fighting and could hear bombing and shelling hitting southern Ukraine.

Although Ukraine had banned most men ages 18 to 60 from leaving the country because they might be needed to defend it, Kozariuk said he didn’t want to leave his family and return to his homeland.

“The truth is, I cannot imagine myself holding a gun and fighting,” he said in Russian as Karavan translated. “I wouldn’t be able to pick up a gun and fight.”

Nebyshinets said he and Karavan have spent time in Ukraine helping out with orphanages and know of many orphans who died fighting the Russians in the Donbas region, where conflict broke out in 2014.

“The Ukrainians are giving them guns and they said, ‘stand here and shoot everybody that looks like Russian.’ And I think the training is really, really poor over there for the kids that are just getting blown up,” he said. 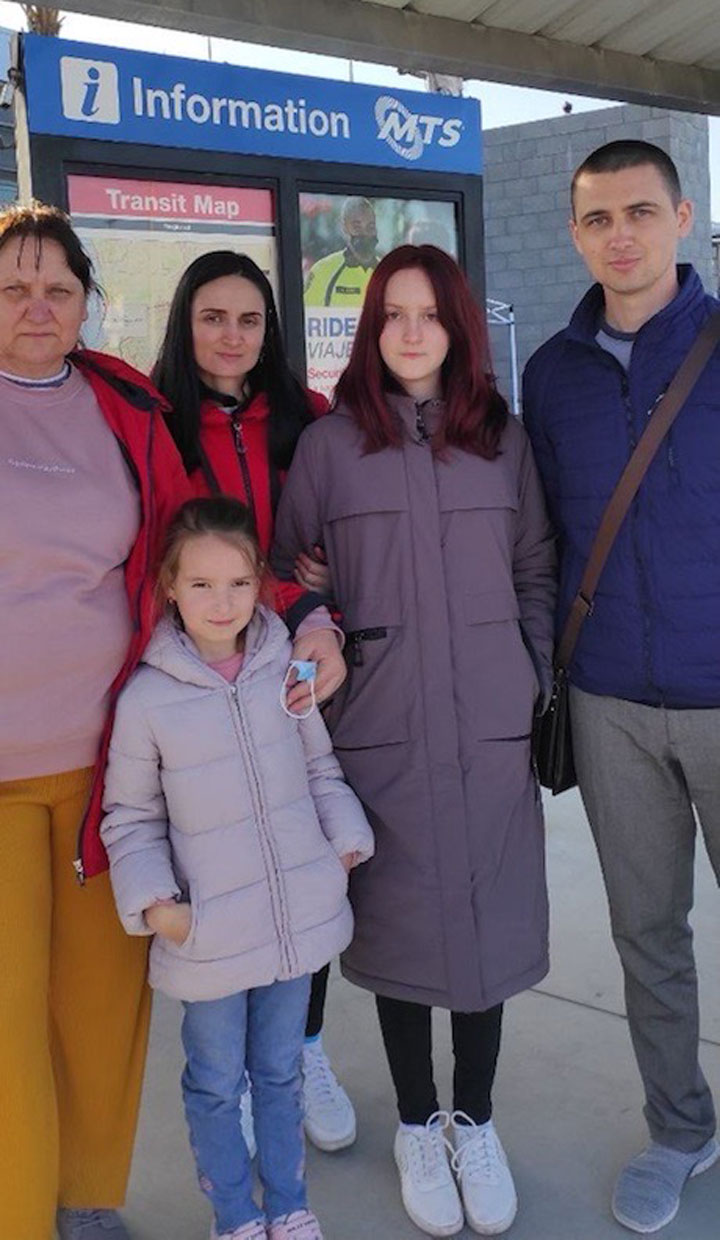 Mykhailo Kozariuk, at right, with his mother, sister, and two nieces. (Boris Nebyshinets)

After a month in Romania, Kozariuk said he and his family knew that they would have to keep moving. They started reading online blogs about how Ukrainians were flying first to Mexico City and then to Tijuana, where they could cross the border into the U.S.

So the Kozariuks pooled their money, borrowed more from relatives, and bought their tickets. In Tijuana, they found volunteers waving the Ukraine flag at the airport. They were taken to “the hub.”

“We were treated like royalty, even though we didn’t expect any of this,” Kozariuk said as Karavan translated. “But we were very happy and satisfied to be able to be greeted from the airport by volunteers, transported by volunteers into a safe place. And we were very thankful.”

Nebyshinets was the green-shirted Fresno volunteer who first worked with Kozariuk, who told him they were a family of five and needed housing. He took their photo and posted it on his church’s communication site, asking for someone with enough space — bedrooms for Kozariuk, his mother, sister, and nieces ages 8 and 14.

A church friend with a home in Burrough Valley in the foothills northeast of Fresno said he and his family could make room for them.

Meanwhile, Nebyshinets continued his volunteer work at the Tijuana hub, and two weeks later found himself working with a Ukrainian man who had arrived in Mexico with his wife. Nebyshinets steered the couple, who said they needed housing, to another church member who lives in Clovis. 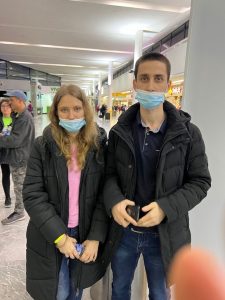 These two Ukrainian refugees are the brother and sister-in-law of Mykhailo Kozariuk who sought help from the same volunteer in Tijuana as Kozariuk had weeks earlier. (Photo by Boris Nebyshinets)

It turned out that the man was Kozariuk’s brother, and the siblings all wound up in Fresno County. They recently reunited at Gethsemane church. Nebyshinets credits divine providence with bringing the family members together.

“And they look so much alike, I came up to them and I said, ‘Are you guys relatives?’ They’re like, ‘We’re brothers,’ ” Nebyshinets recalled. “I said, ‘What are the coincidence of you guys coming up to the same volunteer when we have over 50 volunteers housing people?’ I said, ‘What are the coincidence that both you are in Fresno, you guys are brothers, and you guys came to the same exact church.’ Because we have two churches here in Fresno that are hosting people.”

Kozariuk said he and his brother, who had not communicated during their travels to America, were shocked to discover they had been helped by the same volunteer in Tijuana.

The flow of refugees lasted about a month before the U.S. government decided to halt the border land crossing of Ukrainian refugees, stranding dozens in Mexico.

Now that they are in America, Kozariuk and his brother are hoping to get the necessary paperwork completed so they can start working and not have to depend so much on church members to support them.

Nebyshinets said volunteers are in the process of establishing a nonprofit organization that can accept donations to help the refugees with housing, cars, and settling in Fresno.

And the families are starting to see the sights in California. As a way to welcome them but also to help them decompress from their journey, Nebyshinets said, the Ukrainians recently were taken to Yosemite.

When asked about his first impressions of California and the United States, Kozariuk noted that there is more space between homes here, the cars are bigger, and the lanes they drive in are bigger.

“A lot of things that I have not seen in all of Europe I get to see now, which is quite surprising. The big trees, the architecture. It’s just different and very pleasing,” he said.

Four Fresno Council Races on June Ballot. Who Has Raised the Most?