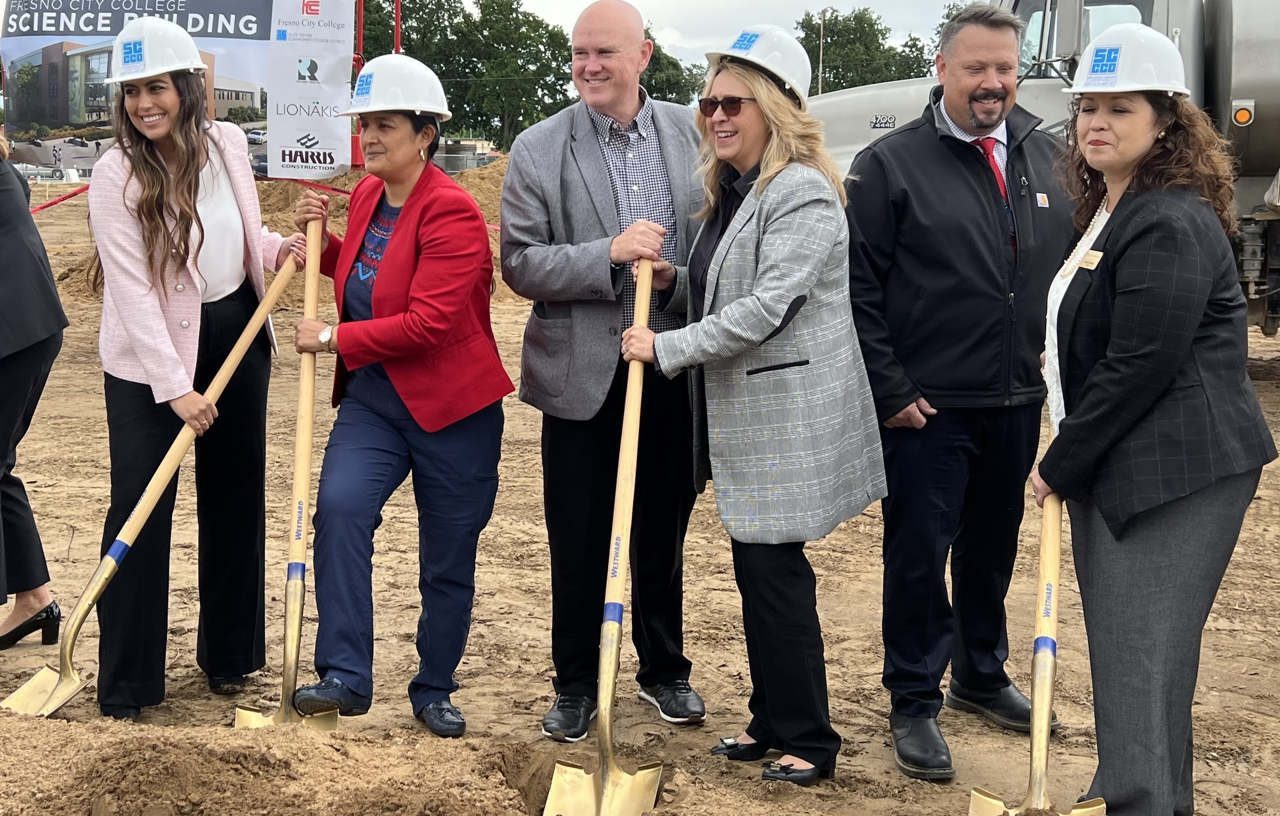 Gray skies and rain sprinkles didn’t dampen the celebration Thursday at the official groundbreaking ceremony marking the start of construction of the long-awaited Science Building at Fresno City College.

The $87 million building at the corner of Blackstone and Weldon Avenues represents different things to different people.

For chemistry professor Seth Yates, the new building will give science students and faculty a lot more elbow room. No longer will lab classes have to be scheduled starting early in the morning through late at night and on weekends to accommodate all students.

For Keith Bergthold, executive director of Fresno Metro Ministry, the new Science Building and other new structures nearby — the new parking garage being built to the north, the new Child Care Center to the south — represent a sizable investment on Blackstone Avenue, which Bergthold called the “spine” of Fresno.

Watch: Groundbreaking Is Milestone for College and City

And, for Fresno Unified Superintendent Bob Nelson, the Science Building will provide a new home for Design Science Middle College High School, which Nelson described as one of the district’s success stories.

Design Science students enroll in college courses on the Fresno City campus, enabling them to earn a two-year degree during their high school years, saving them time and money later in college costs, Nelson said.

But Design Science students aren’t the only ones taking high school classes for college credit — the district is expanding its dual enrollment program to all its high schools, he said during the groundbreaking ceremony.

The 87,000 square-foot building will have three levels, with modern labs, tutoring spaces, flexible study areas, and places where students and faculty can hang out.

The planners and designers made a conscious decision to emulate the brick facades that are noteworthy on the campus, including the Old Administration Building, said Chancellor Carole Goldsmith, who previously served as Fresno City’s president.

Likewise, officials made a conscious decision to put the new structures along Blackstone, which will create a new “front door” for the college, the largest in State Center Community College District.

And that investment on Blackstone will be valuable for the city of Fresno and redevelopment efforts along the corridor, Bergthold said.

The Science Building is the latest State Center project to launch that is being constructed for the most part with Measure C funding. Other projects already underway include the West Campus in southwest Fresno, the new First Responders Campus in southeast Fresno, and the Performing Arts Center at Reedley College.

After the ceremony, Yates told GV Wire about how tightly packed students and equipment are in the current Science Building, which is scheduled for remodeling and will continue to be used for science and engineering classes after the new building is constructed.

The current Science Building was built in 1973 — not quite a decade before Yates was born — and before equipment like fume hoods were put in place, further crowding the spaces, Yates said.

Chemistry equipment is so crammed together that it’s hard to access, he said.

“We have a certificate program that teaches students chemistry instrumentation, and you have to see a picture of the room to understand how packed every instrument is next to each other without room to even move,” Yates said.

Crystal Hernandez, a chemistry student from Coarsegold who is planning to study civil engineering at Fresno State, said she is a little envious that the Science Building won’t be completed by the time she finishes her studies at Fresno City.

“I’m not going to lie, I am a little jealous,” she said with a laugh. “But (after graduation) if I ever just come by and visit just to check it out, check on some old professors, see how they’re doing, I’d be happy enough just to see the building and all the students enjoying it, enjoying what I couldn’t get to enjoy.”

Although science, engineering, and math students are excited at the prospect of the new Science Building, the structure that has the most widespread attention is the parking garage, Hernandez said.

“I know a lot of my friends are really excited for this parking garage to open up because we all have to be jam-packed over there and like making sure you’re not hitting somebody, or trying to find a spot, or parking so far, it takes you so far to walk to your class,” she said. “This is perfectly exactly what students needed. It’s a great blessing.”

Related Topics:FeaturedFresno City College
Up Next